Domina - Franken, Germany (or, what the heck is a Bocksbeutel?) 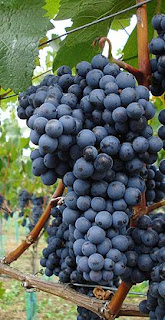 Today's grape is a German crossing just like so many other German crossings that I've written about time and time again (see, for example, my posts on Huxelrebe, Dornfelder, Scheurebe and Kerner).  The grape's name is Domina (which means "lady") and it was created in 1927 at the German research institute of Geilwilerhof by two men named Bernhard Husfeld and Peter Morio.  They crossed Pinot Noir and Blauer Portuguesier to create a high-yielding grape with very good disease resistance.  The vine is so productive that bunch-thinning is required to avoid thin, dilute wines from over cropping.  The berries are fairly small, and as a result, the finished wines tend to be very deeply colored, which is interesting since neither Pinot Noir nor Blauer Portuguesier are particularly well known for producing deeply colored wines.  The grape is grown on about 400 hectares of land in Germany (just under 1000 acres), most of which (350 hectares) is in Franken (just east of Frankfurt in southeastern Germany) and the Ahr (just west of Bonn).  There are apparently also about 1000 square yards under wine in Switzerland, but I'm not aware of any other plantings in any other countries.

An unbelievable number of grapes grown commercially in Germany are, like Domina, crossings made at these research institutions, and if you're curious as to why that may be the case, I invite you to peruse any of the articles linked above, as I feel like I've discussed it ad nauseum.  Instead, I'd like to talk a little bit about the bottle that this wine was sold in, the bocksbeutel.  Wikipedia calls the shape of the bocksbeutel a "flattened ellipsoid," but it really just kind of looks like a flask to me.  I've seen and tried many German wines in this particular kind of bottle, but I always assumed it was some kind of gimmicky packaging used to catch the eye of a consumer.  I didn't realize that the EU considers it a "protected bottle shape," which is something I didn't even know existed, but apparently that means that the actual shape of the bottle itself must conform to certain measurements, and also that only certain wines from certain areas are allowed to use it.  According to Wikipedia, the bottle specifications state that a bocksbeutel must be "a short-necked glass bottle, pot-bellied but flattened in shape, with the base and the cross-section of the bottle at the point of greatest convexity ellipsoidal in shape. The ratio between the long and short axes of the ellipsoidal cross-section is approximately 2:1, and the ratio of the height of the convex body to the cylindrical neck of the bottle is approximately 2.5:1."

They go on to note that the bocksbeutel is approved for use in the following areas: 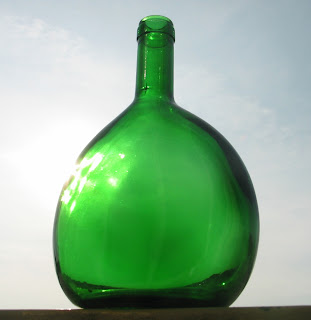 - German wines of QbA and Prädikatswein quality from Franconia and Certain parts of Baden, in the district known as Tauberfranken and around Baden-Baden

- Certain Portuguese wines. The use is limited to rosé wines and those other quality wines and vinho regional which can prove that they have traditionally been bottled in cantil-type bottles before they received their present classification.

The bottle's history can be traced back several hundred years.  In his The Wines of Germany, Stephen Brook notes that the bocksbeutel shape appears in some German artwork of the 16th Century and that glass versions have been manufactured in Germany since at least 1685.  In 1726, the Prince-Bishop of Würzberg declared that the best wines from that city be bottled in the bocksbeutel, and its wider use followed shortly after.  There is no agreement on the origin of the name, but there are at least two major theories.  The first is that it comes from the word Booksbüdel, which was the name for a small sack used to carry books, like prayer books or song books, in the 15th and 16th Centuries.  The other explanation is that name means "ram's scrotum," because the shape of the bottle apparently resembles the scrotum of a ram.  I do a lot of fact checking for this blog, but that's something I'm just going to take someone else's word on. 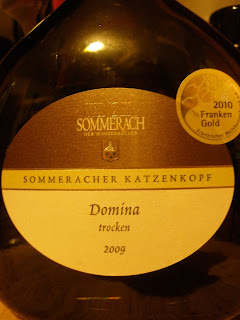 The wine that I was able to try was the 2009 Winzer Sommerach Domina from the Franken region of Germany, which I picked up from my friends at the Spirited Gourmet for around $25 (I believe it is also currently available from the fine folks at Curtis Liquors for around the same price).  In the glass the wine was a fairly dark purple-ruby color.  The nose was somewhat reserved with aromas of black cherry, blackberry, old leather, cedar and char.  On the palate the wine was on the fuller side of medium with medium acidity and low, soft tannins.  There were flavors of smoky, scorched black cherry and sour cherry, blackberry, cedar and cranberry.  There was an intriguing mixture of dark black fruits and tart red fruits, but the palate was mostly dominated by a kind of bitter smokiness.  It wasn't as pronounced (or as unpalatable) as the burnt rubber that pretty much ruined the Blauer Portuguesier that I tried, but it still was a bit unwelcome for me.  It was a nice wine, but probably a bit over priced for what you get.  I've taken some heat for not being a big fan of German red wines, and this bottle clearly isn't the one to show me the light.
Posted by Unknown at 4:31 PM