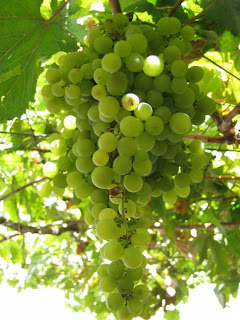 What are we talking about when we talk about Malvasia?  This can be a frustrating question to answer, and many of the sources we would turn to in order to help us understand Malvasia actually aren't much help at all.  Most sources, like Oz Clarke's Grapes and Wines and Wikipedia, consider Malvasia as a family of grapes or, even worse, as a series of "sub-varieties" that all basically roll up into a single thing called "Malvasia."  Before we go too much farther, I would like to take this opportunity to implore you, if you have ever used the phrase "sub-variety" to describe a grape, to please discontinue this practice and strike these words from your vocabulary.  Properly speaking, there really isn't any such thing as a sub-variety.  There are grape varieties and there are clonal variants of these varieties, but there is no such thing as a sub-variety.  Much of the confusion over sub-varieties comes, I think, from grape "families" like Malvasia, Trebbiano or Lambrusco, where there are a handful of different grapes that all have the same first word in their names, but different second words.  The easy conclusion to jump to is that these are all basically the same grape, and they are just different enough to require a second word to differentiate them from one another, but are basically so similar that we are best served by thinking of them as a single group.  This is absolutely not the case, and today I'd like to start a new series on this blog called Know Your Malvasia, where I'll be taking a look at different Malvasia-named grapes to see what we're really talking about when we talk about a particular Malvasia.  The series will stretch out into Know Your Lambrusco and Know Your Trebbiano as well, so stayed tuned for that.

Malvasia is perhaps the most difficult grape to get a good handle on because while there are definitely named  varieties of Malvasia that some wine drinkers are familiar with (such as Malvasia Nera or Malvasia Fina), for the most part, when you come across a wine made from the Malvasia grape, you are only ever given the word "Malvasia" to go on.  The most commonly planted Malvasia in Italy is Malvasia Bianca di Candia, which can be found virtually everywhere throughout the country.  To make matters worse, though, there are specific varieties of Malvasia that can be found in specific regions of Italy, and these varieties aren't always differentiated from Malvasia Candia.  In Tuscany, you've got with Malvasia Bianca Lunga while in Lazio, you're usually dealing with Malvazia del Lazio (for white wines, anyway).  Malvazia del Lazio is actually related to the Muscat family of grapes (literally, as it is an offspring of Muscat of Alexandria), but Malvazia Bianca Lunga is more closely related to other Malvasias like Malvasia Nera di Brindisi, Malvasia di Lipari and Malvazija Istarska, though all of these are separate varieties and are in no way "sub-varieties" of any grape.  Worst of all, Malvasia Bianca di Candia doesn't seem to be related to any of the other Malvasia varieties, including Malvasia di Candia Aromatica, but rather has a parent-offspring relationship with Garganega, of all things!

Once you get all of the above straightened out, you still have to deal with the rest of the world, since there are a handful of Malvasia-named grapes grapes in Slovenia and Croatia as well as a few in France and Spain as well.  Portugal probably comes in second in the race for Malvasia confusion, as they have Malvasia Fina (which we learned is actually the Boal grape from Madeira), Malvasia de Colares, and Malvasia Preta, none of which are related to one another or to the other Malvasia-named wines in other parts of the world.  The most well-known Malvasia-named wine in Portugal, though, is actually not generally known as Malvasia at all.  Rather it is known as Malmsey, and it is the sweetest of the four noble Madeira styles (which are, from driest to sweetest, Sercial, Boal, Verdelho and Malmsey).  Virtually every Madeira source that I've read simply indicates that Malmsey is made from Malvasia grapes, but as I hope we've seen by now, that's really not a very useful distinction.  After all, Boal is technically also made from Malvasia grapes, since one of Boal's synonyms is Malvasia Fina.   What are we talking about when we talk about Malmsey Madeira?

The answer is, as you might expect, a little complicated.  In the 15th Century, Malvasia Cândida (which is not the same as Malvasia Bianca di Canida or Malvasia di Candia Aromatico), which is in fact the same as the Malvasia di Lipari grown in Sicily (which we'll examine in a few weeks), was introduced to the island of Madeira and for many centuries, this was the grape used to produce the wines labeled as Malmsey.  For reasons that are not entirely clear to me, Malvasia Cândida declined in popularity through the years and today there are only about 10 acres of it left on the island of Madeira.  In the 1970's, a new grape called Malvasia Branca de São Jorge was introduced to the island.  This grape was created by José Leão Ferreira de Almeida at an agricultural research station near Lisbon from two unknown parents and was first cultivated in the parish of São Jorge on the northern coast of Madeira.  There are about 86 acres of Malvasia Branca de São Jorge currently planted on Madeira and it is now the dominant grape used for production of wines labeled as Malmsey.  So, as a general rule of thumb, wines labeled Malmsey from prior to 1970 or so are probably mostly Malvasia Cândida, while wines made after 1970 are probably Malvasia Branca de São Jorge. 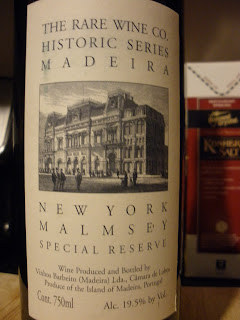 Which brings us to today's wine, which is the NV Rare Wine Company New York Malmsey ($40).  I can't say for sure what grape or grapes were used to create this, but my best guess is that it's probably mostly Malvasia Branca de São Jorge.  In the glass the wine was a fairly dark tawny-brown color.  The nose was fairly intense with aromas of burnt sugar, raisins, caramel, prunes and smoke.  On the palate the wine was medium bodied with fairly high acidity.  It was very sweet with flavors of smoky scorched sugar, prunes, raisins, toasted nuts and a touch of fresh green apple.  The alcohol was pretty noticeable in this wine, much more so than in the other three Madeira styles I tried from this producer (Sercial, Boal, Verdelho), which made the wine a bit more awkward than some of the others.  It was a very nice wine, but it was probably my least favorite of this series of wines mostly because I just felt like it wasn't quite as well balanced as some of the others.  I'd be curious to try an older vintage version alongside a newer vintage to see what kind of difference the change in grape variety makes.
Posted by Unknown at 4:30 PM

Was the decline of Malvasia Cândida due to disease or susceptibility to rot in favor of the hardier variety?

WK - Can't find any sources that are really able to comment, but if I were to put money on an explanation, that's the one I'd go with.