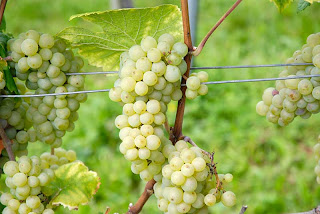 It's taken 54 posts to get here, but we're finally taking a little visit to Germany.  If you are looking at German wines in your average wine shop, Germany can seem like a monoculture: there is Riesling as far as the eye can see and little else.  In actuality, Riesling accounts for only about 22% of the vineyard area in Germany with the other 78% being made up of over 135 different grape varieties (of which, only about 17 different varieties account for at least 1% of vineyard area on their own).  Germany also has a reputation for being centered on white wine production, which is true, but there is more red wine produced in Germany than you might think: about 37% of German vineyard area is devoted to red grapes, typically from Pinot Noir or Dornfelder.  It takes some digging, but there are certainly some very interesting wines made from unusual grapes in Germany.

Scheurebe (pronounced "shoy ray beh") is one of those grapes.  The Germans, more so than any other European wine producing nation, are crazy about crossings.  There are several different viticultural institutions in Germany (most notably in Geisenheim) where a lot of research was being done (and is still being done) to develop grape varieties that could withstand the extremes of the German climate.  Germany is at the very northern edge of where quality wine can be produced, so they figured they'd help nature out a bit and try to develop grapes with higher tolerances for the climatic conditions in their country (their other aim, which isn't touted so much, was to create grapes with very high yields, and they were very successful on that count).

In that spirit, in 1916, while director at one of the grape breeding institutes in Germany, Georg Sheu created Sheurebe by crossing Riesling with what is thought to be an unknown wild vine.  Many texts print that the Scheurebe crossing is Silvaner x Riesling, but genetic testing has shown that Silvaner is not related to Sheurebe at all. The confusion likely comes from the fact that Scheu was purported to have been attempting to create a grape much like Silvaner but with more forceful, characterful aromatics and greater hardiness. Sheurebe was never heavily planted in Germany and current plantings occupy less than 2% of the vineyard area and are falling. 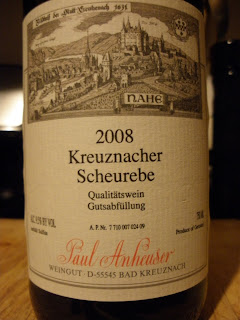 I was able to try two different Scheurebe wines.  The first was a QbA (if you're unfamiliar with the German quality control tier, feel free to brush up here...the short explanation is that QbA is similar to Vin de Pays in France or IGT in Italy) bottling by Paul Anheuser from Kreuznach in the Nahe region of Germany.  The vintage was 2008 and it cost about $10 from my friends at Curtis Liquors.  In the glass, the wine was a light silvery lemon color.  The nose was very expressive with grapefruit, pear and some lemon citrus.  The wine was medium sweet (it clocks in at 9.5% alcohol) with medium acidity with loads and loads of grapefruit flavors with some rindy, pithy citrus and honey notes.  It lacked the nervy backbone that good German Riesling has and as a result, it felt a little off-balance and too sweet.  Structurally it reminded me quite a bit of the semi-sweet wines from Georgia, especially the Tsolikauri and the Tbilisuri, though the flavors here were definitely more in the honeyed grapefruit than the stone fruit and orange flavors of those wines.  I drank this with turkey tacos and it was a serviceable wine in that capacity. 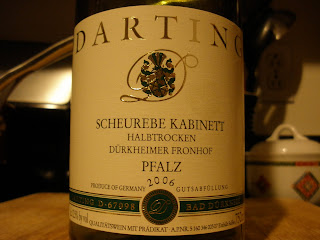 The second bottle I had was a 2006 Kabinett level wine from Darting.  The wine was from Durkheimer Fronhof in the Pfalz region of Germany and I picked it up at an end-of-the-vintage sale for about $15.  The wine was much darker than the Anheuser bottling, leaning much more toward the gold end of the spectrum. The nose was expressively floral with honeysuckle, honey, apricot, peach and grapefruit aromas.  On the palate, the wine was full bodied with a rich, oily texture.  It was off-dry (you can see that the label specifies "halbtrocken" or "half-dry" in German, though this was a hefty 12.5% alcohol) with nice acidity.  There were ripe stone fruit flavors of apricot and peach with very ripe grapefruit and honeysuckle flowers.  If I didn't know better, I would think that these grapes may have had a botrytis influence, but it's hard to get that in a Kabinett level wine.  This was so rich and luscious though just barely sweet.  It was somewhere between a German Riesling and fully ripe Alsatian Gewurztraminer and I thought it was just phenomenal.  There is definitely a difference in quality with this grape as you go up the Prädikat scale.  I would probably give the QbA level wines a pass unless you're really looking for something that's grape-juice sweet (though some can have an aggressive under-ripe grapefruit quality to them) and stick to the Prädikat level bottlings.  I've read that the sweeter Spätlese and Auslese versions are really phenomenal, but I've yet to run across any. 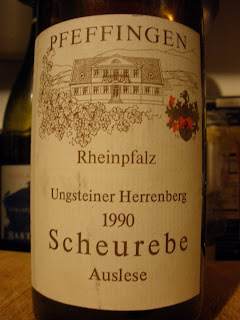 Not only was I recently able to find an Auslese level Scheurebe, but the bottle was over 20 years old, giving a sense of how well this grape ages.  My friends over at Bin Ends had a few bottles in their clearance bins of the 1990 Pfeffingen Scheurebe from the Rheinpfalz region of Germany for about $18.  When I went to open the bottle, the cork was saturated and nearly fell completely into the wine.  I was able to extract it, but it was clear that it was starting to fail.  The wine was a deep bronze-gold color in the glass, and I began to worry that the wine was totally oxidized.  Miraculously, it wasn't, and when the initial musty aromas dissipated, what was left was a nicely aromatic mix of honey, orange blossom and ripe red grapefruit.  On the palate the wine was on the fuller side of medium with medium acidity.  There were flavors of ripe peaches, ripe red grapefruit and honey.  It was quite sweet, but not cloyingly so.  I drank it with a spicy pork tenderloin which it complemented well.  I would personally prefer bit more acid in my sweet wines, but this was fairly well balanced overall.  It's not the most complex wine you'll ever drink, as the grapefruit notes were very dominant here, but it was pretty tasty and a relatively nice bargain.  It was marked down from a heftier $36 which would have been a bit much for what you get here, but it is an interesting alternative to Riesling for those looking for something a bit different.
Posted by Unknown at 12:33 PM

We've selected you as our Foodista Drink Blog of the Day for this May 23, 2011! Your blog (regarding Scheurebe - Kreuznach (Nahe) and Pfalz, Germany ) will be featured on the Foodista homepage for 24 hours. Besides posting your link on the homepage, we will also post a couple shout outs on our Twitter and Facebook pages.

Since you are now a part of the Foodista Featured Drink Blogger of The Day Community, we've created a special badge for you to display proudly on your blog sidebar. I couldn't find your email on your blog to send you the access code for the special badge, but I want to make sure you get it if you are interested. Please send me an email and I'll send it right away.

We are really enjoying your blog and look forward to seeing your recipes, tips and techniques on Foodista! If you would not like to be recognized on Foodista please let me know and I will remove your blog from our queue.