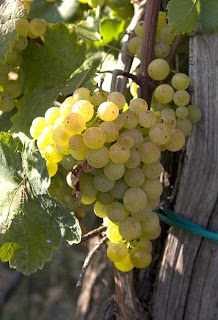 Several years ago, when I first started writing this blog, I came across the website for the Blue Danube Wine company, which is an importer located in California that specializes in eastern European wines.  I looked through their online catalog and found an incredible number of wines made from grapes that I had never heard of before and which I had little chance of finding in my local wine shops.  I live in the state of Massachusetts, though, and it isn't legal for wineries, wine shops, distributors or importers to sell wine directly to me, so for the past couple of years, I've just had to admire Blue Danube's portfolio from afar and hope that I could someday try some of the interesting wines that they were working with.  A few months ago, my dream came true as Blue Danube began to be distributed within Massachusetts by Arborway Imports.  Arborway only carries a handful of Blue Danube's wines, but most importantly, they and Frank Dietrich (owner of Blue Danube) were willing to work with me and allow me to get my hands on several of Blue Danube's offerings in a totally legal fashion.  Over the next few weeks and months, I'll be writing about many of these really cool wines that I've been able to try.

The first wine I'd like to tell you about is made from the Žlahtina grape.  Žlahtina is a Croatian grape that is found on the island of Krk just off the coast of Dalmatia in northwestern Croatia (see this map for more details).  Krk is the largest of the more than 1000 islands in Croatia and most of the vineyards on the island are located inland, away from the coast, in order to avoid the "Bura," the strong wind that blows throughout the region of Dalmatia.  Krk was once well known for the wines it produced and at one time, the island was covered with over 25,000 hectares (nearly 62,000 acres) of vines.  Today, however, there are fewer than 250 hectares left, over 95% of which are devoted to the Žlahtina grape.  The grape's name comes from the the Croatian word "Žlahtno," which means noble and gives some indication as to how highly regarded the grape was in the past.  Most sources agree that Žlahtina is likely native to the island of Krk, as it is found pretty much nowhere else in the country (or outside the country, for that matter).

There are some naming issues with Žlahtina that can cause confusion with other grape varieties.  There is a grape grown in Slovenia called Rdeča Žlahtnina, or "pink Žlahtnina," and according to the crew at Wine Grapes, the genetic profile given for Rdeča Žlahtnina in a recent paper (citation 1) matches that of the Chasselas grape from Switzerland.  I checked the profile for Chasselas in the VIVC database, and it looks like they do match.  The Wine Grapes crew also say that Žlahtina is an accepted synonym for Chasselas in the VIVC database (and therefore that many believe that Žlahtina and Chasselas are actually the same grape), but it looks like they weren't reading carefully enough.  There is a Žlahtina Bigela, a Žlahtnina, and a Žlatina listed as synonyms for Chasselas, but no Žlahtina.  Furthermore, the DNA profile given for Žlahtina in this 1999 paper is definitely distinct from that of Chasselas/Rdeča Žlahtnina, showing that this is definitely a distinct grape variety. 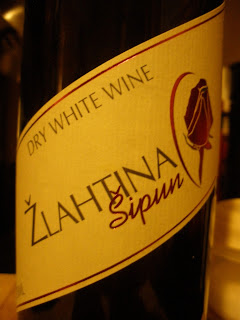 While I did order several wines from Blue Danube, Frank was kind enough to also send me a few samples and the bottle under review here was one of those sample bottles.  It is the 2011 Šipun Estate Žlahtina, which retails for about $17 on the Blue Danube website.  The vineyards and winery are located on the eastern part of the island of Krk, around the city of Vrbnik.  The wine is fermented in stainless steel and then 60% is kept in tank while 40% is aged in a mixture of acacia, oak, mulberry and chestnut woods.  In the glass the wine was a fairly light silvery lemon color.  The nose was moderately intense with aromas of pear, white flowers, green melon, golden apple and chalk.  On the palate the wine was medium bodied with fairly high acidity.  There were flavors of Lemon, pear, white flowers, pineapple and green apple with a strong, stony and chalky kind of minerality on the finish.  It was tart and racy, but also delicate and soft at the same time.  It was dominated by lemon citrus and mineral flavors, but it had a little flesh with some white pear fruit as well.  Ivica Dobincic, a Croatian vigneron, praises the Žlahtina grape for its difficulty in accumulating sugars, even in very hot years, which means that these wines are often modest in alcohol (this one was 12.4%) and delicately flavored.  It's a light, delicious little wine that was really a pleasure to drink.

I also really like Blue Danube's portfolio and got a shipment from them as soon as our state legalized direct-shipping! I'm sure that you'll find a lot of fringe wines from them!

I just happen to be NOW in Krk and I'm planning a trip to the wine-growing part of the island, so I chanced to stumble upon your page and was very happy with it: I'm going to fill my car up with casks of Slahtina before driving home to Italy. But may I ask you something totally different, ie., what bizarre sort of Saudi Arabia-like laws govern wine-selling in the State of Massachussetts?