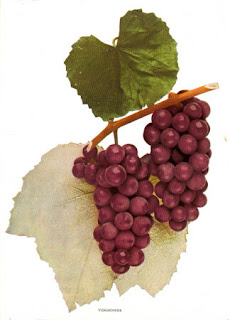 The recently published Wine Grapes, which I reviewed here, advertises itself as "a complete guide to 1,368 vine varieties," which is really an astonishingly high number of grapes.  I've covered just over 200 on this blog and probably have another few hundred in me, but 1,368 represents a staggering amount of work, and even though I definitely have some issues with the book, I really admire and respect Jancis Robinson and her team for all the work that obviously went into the finished product.  That being said, one of the first things that I did when I finally got my hands on my copy of the book was go through it to see whether the were any grapes that I had tried that the authors may have overlooked.  I didn't find very many, but one that I did find was a grape I discovered when I placed an order with Arbor Hill Winery (who also made the dry Moore's Diamond I wrote about recently) in New York State called Vergennes.  I had never heard of Vergennes before seeing it on Arbor Hill's website, so I quickly ordered it and have recently had an opportunity to try it.

Vergennes is thought to have originated as a chance seedling (which just means that a vine was naturally pollinated in the field and one of the resulting seeds was planted) in the garden of a William Green in Vergennes, Vermont in 1874.  According to the VIVC database, one of the parents was a grape called Dracut Amber, but since the vine was naturally pollinated, the other parent is currently unknown.  Arbor Hill's website claims that the grape has vinifera parentage, but most other sources seem to disagree.  In the 1908 work The Grapes of New York (viewable here), U.P. Hedrick considers Vergennes to be a pure Vitis labrusca variety (and the VIVC agrees), and says: "The variety is somewhat remarkable in being probably the best shipper and the best keeper among the pure Labrusca varieties. Nearly all of the grapes which ship and keep well have more or less Vinifera blood, but if Vergennes has any foreign blood it shows it only in its keeping and shipping qualities."  Hedrick describes the vine as a reliable cropper that can be prone to excessive yields, which can affect ripening times if left unchecked (excessive crops can delay ripening by up to two weeks).  He also says that Vergennes wasn't very popular with growers because the vine had a tendency to sprawl, or grow wild and resist training, which made it difficult to work with in the vineyard.  It is fairly cold hardy, but is also somewhat susceptible to diseases like anthracnose.

Hedrick was lukewarm on the quality of the Vergennes grape, saying "the appearance of the fruit is attractive and while the quality is not high, yet it is good; the flavor is agreeable, the flesh is tender and seeds and skin are not objectionable. Considering all of its fruit characters, Vergennes may be said to be more than an ordinary grape - much better than several better known commercial varieties."  An account of Vergennes published in 1900 in the Proceedings of the Fourth Annual Eastern New York Horticultural Society is a bit more positive, stating "although the Vergennes is not a new grape, having been introduced in 1870 (sic), it is mentioned here because it is believed to be worthy of more attention from good vineyardists than it has received."  The most glowing historical account of grape comes from a gentleman named William Noble, who is quoted in a catalog published in 1894 by Bushberg Vineyards and Grape Nurseries in Jefferson, Missouri (view here).  It is interesting to read Noble's effusive praised dampened by the nurserymen in the excerpt below:

"Flavor not rich, but pleasant, free from hard pulp; ripening a little after Concord and possessing superior keeping qualities.  As a winter grape it probably heads the list.  This variety proves generally satisfactory, in some localities very desirable.  General Wm. H. Noble gives the following recommendation to the Vergennes: 'for hardiness, vigor of growth, large bounteous fruitage, a fruit of richest tint of blended pink and purple bloom; for its yield of wine with the most delicate aroma; for its early maturity of wood and fruit; for its long-keeping quality, I think this the equal of any American grape.' While this is excessive praise, which we would not indorse (sic), the Vergennes is no doubt well worthy of attention.  It has so far 'held its own,' and increased in popularity."

If you scan through any of these old catalogs or books on American viticulture from the early 20th Century, you'll come across a lot of entries for grapes that have more or less disappeared from cultivation over the past hundred years.  Vergennes likely would have joined the ranks of many of those vines if not for John Brahm of Arbor Hill Winery.  John graduated from Cornell in 1964 with a degree in Pomology and worked for Widmer Wine Cellars in Naples, New York for over 20 years.  He and his wife founded Arbor Hill in 1987 and they decided to plant some "experimental" grape varieties to see how they fared.  They are credited with being the first winery to produce a wine made from the Traminette grape, and are also credited with "re-introducing" the Vergennes variety as well. 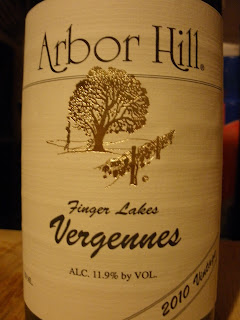 I bought a bottle of the 2010 Arbor Hill Vergennes for $10.50 from the winery.  I spent a little time on Google to see if I could find another Vergennes-based wine and came up blank, so this may very well be the only one in the world right now.  Though the skins of the grape are pink, this is a white wine and in the glass it was a fairly light silvery lemon color.  The nose was moderately intense with aromas of pear, green melon and a subtle but unmistakable note of foxy, musky grapiness.  On the palate the wine was on the lighter side of medium with high acidity and touch of sweetness.  There were flavors of pear and grape musk with something a little steely and minerally on the finish.  If you've ever tasted a slip-skin grape like a Scuppernong and kept the skin in your mouth for awhile after you've eaten the pulp, you'd have a really good idea of what this wine tasted like.  It had all the musk and flavor of a wild grape, but it lacked the sugary kick that you expect to go along with those flavors and aromas.  Much like the  dry Moore's Diamond from this same producer, I found this wine a bit disconcerting, odd and not really all that pleasant to drink.  While I applaud the spirit of experimentation that would lead one to make dry or mostly dry wines from native American grape varieties, I'm beginning to feel like the results are showing why so many producers make sweet wines from these grapes.  Some flavors just need some sugar, and these wild, musky grape flavors certainly fall into that category for me.
Posted by Unknown at 4:25 PM