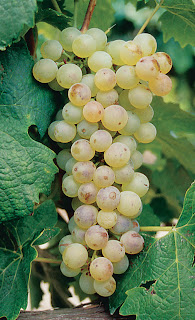 I've covered some pretty rare grapes on this site over the past three years or so, but today's grape is definitely the scarcest one that I've ever written about.   I would guess that prior to today, my post on Amigne probably would have taken the prize for rarest grape, as it is planted on less than 50 hectares of land in the world, and nearly all of them are in a single valley in Switzerland.  It's possible that something like Tempranillo Blanco may be planted on less land, but I haven't been able to find any planting statistics that would say for sure.  Today's grape, though, is grown on a scant 6 hectares of land, which only comes to around 15 acres.  To put it another way, 15 acres is 0.023 square miles (0.060 square km for those of you on the metric system).  When I was growing up in Georgia (the US state, not the country), my family lived just outside of a very small town on about 13 acres of land.  You could stand anywhere in the yard and see every other part of it with little trouble and if you wanted to run a lap around it, it would probably take you about 10 minutes at a good jog.  Six hectares is practically nothing.

But it's not absolutely nothing, and the wine made from the grapes grown on those scant six acres of land does occasionally find its way to our shores.  Before we get to the wine, though, I'd like to take a few moments to take a closer look at the Biancu Gentile grape itself.  References to Biancu Gentile can be traced back to 1822, when the grape was said to be growing in Pila Canale in the southern part of the island of Corsica.  It is thought to be native to Corsica and examples of Biancu Gentile have not been discovered anywhere outside of the island (though UC Davis does have a small experimental plot growing in the San Joaquin Valley in California).  The grape's name means something like "noble white," but the word gentile can also mean something like "grafted," or, "cultivated," as opposed to "wild."  Biancu Gentile is prized for its aromatic profile and can reach very high sugar levels, but the acidity begins to drop precipitously as the sugars rise so growers must be especially vigilant in order to pick grapes that can make balanced rather than heavy, flabby wines.

The grape was thought to be extinct when Yves Leccia, whose varietal Biancu Gentile we'll be taking a look at below, discovered a small block of it growing somewhere on the island of Corsica.  He took some cuttings and began to cultivate it in his own vineyards.  Since Biancu Gentile was supposed to be extinct, it was not permitted in the AOC wines of Corsica and so anyone making a varietal wine from it had to resort to the vin de table classification level for their wines.  As of 2010, Biancu Gentile is allowed in the new IGP classification (which is basically the new EU-wide term for what used to be called vin de pays in France or IGT in Italy), so wines made from it can have the grape name listed on the bottle (this is forbidden at the vin de table level, as is vintage information or specific geographic information).  Biancu Gentile is often blended with the local variety of Vermentino, but a handful of producers such as Yves Lecchia, Antoine Arena and Yves Canarelli of Clos Canarelli make varietal wines from their scant plantings (around 1 ha each) of the grape. 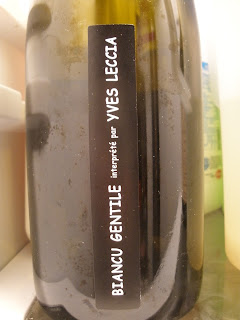 I was able to find a bottle of the 2011 Yves Leccia Biancu Gentile as a special order from my friends at the Wine Bottega for around $40.  All of Yves Leccia's white wines are pressed and cold soaked for 24 hours before allowing fermentation to begin.  Fermentation (2-3 weeks) and maturation (6 months) is done in temperature controlled stainless steel and there is no malolactic fermentation.  In the glass the wine was a medium lemon gold color.  The nose was moderately intense with aromas of ripe pear, lime, grapefruit, honeysuckle flower, lemon peel and chalk.  On the palate the wine was medium bodied with medium to medium + acidity.  There were flavors of lime, grapefruit, pear, and honeysuckle with a bit of chalky minerality on the finish.  The nose was an absolutely delightful citrus fruit cocktail, but the intensity and just general loveliness didn't really follow through that much on the palate.  The price tag on this wine is pretty steep for what you're getting, but then again, with only 6 hectares under cultivation, you may not get many chances to try a Biancu Gentile based wine.
Posted by Unknown at 4:26 PM

FW- Didn't know you were a good 'ol southern boy!

15 acres, wow that is mindbogglingly small!

If you had to describe this wine in terms of other wines / grapes, is it more Italian like or French like? Sauvignon Blanc meets Chenin Blanc?

I've enjoyed reading your informative post. By the way, you might wish to read about Malta's two native varieties Girgentina and Gellewza. Of the latter there is about as little as 35 Ha left. See www.georgesmeekers.me.