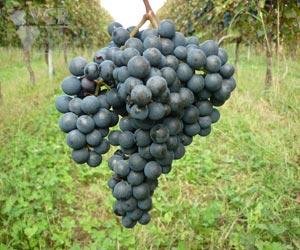 I frequently receive emails from readers who are looking for more information about a particular grape that they've come across that I haven't had an opportunity to write about yet.  A few months ago, several different readers started asking me about an Italian grape called Rebo, which at the time I had not heard of before.  One of the people inquiring was just starting to import wine into Ontario, Canada, under the name Don Emilio Brands, and a wine made from the Rebo grape was going to be his first import.  It took some creativity, but I was able to get a bottle of Rebo from him, and I'd like to tell you a little more about the grape and the wine made from it.

Rebo was created in 1948 by an Italian agricultural geneticist named Rebo Rigatti at the San Michele all'Adige research center in Trentino.  Rigatti lived from 1891 until 1971, which made him a contemporary of Luigi Manzoni, creator of many Italian crossings such as Manzoni Bianco.  Manzoni was certainly a more prolific breeder and his crossings are definitely more widespread today than Rigatti's, as evidenced by the fact that Rebo, Rigatti's most well-known crossing, is planted on less than 100 acres in Italy today, as opposed to 24,000 acres for Manzoni Bianco.  Many sources (such as Wine Grapes) indicate that Rigatti initially listed Rebo's parentage as Merlot x Marzemino, but that DNA evidence has recently shown that it is in fact a Merlot x Teroldego crossing.  Lacombe et al. (citation 1), in their massive study which analyzed several thousand grape varieties to test for synonymies and parental relationships, confirmed that the correct parentage is Merlot x Teroldego, but they list it as confirmation of the breeder's data, which suggests that Rigatti had the parentage recorded correctly all along.  I do not have access to Rigatti's papers or published reports so I'm not sure what he actually said, but I don't suppose it matters much since the actual parentage has been confirmed several times at this point.

Most of the Rebo grown in Italy is in the province of Trentino, where Rebo Rigatti lived and worked.  Wine Grapes claims that varietal wines from Rebo are grown only in the Trentino DOC, but I think what they mean is that the Trentino DOC is the only DOC or DOCG area in Italy that allows for varietal Rebo wines.  Today's wine, the 2009 Pratello "Nero per Sempre," is from the Benaco Bresciano IGT region, which is around the western shore of Lake Garda in Lombardy.  Nero per Sempre means something like "black forever" in Italian, but I'm not exactly sure what that's supposed to mean in this context.  This wine is made from 100% Rebo grapes that are dried in wooden boxes with forced ventilation for 30 days.  The partially dried grapes are then pressed and the juice is poured into stainless steel tanks for fermentation.  The process is very similar to the production of Amarone, but the drying time for Amarone grapes is much longer.  Pratello also makes a regular table wine from non-dried grapes that is 95% Rebo and 5% Barbera, but I wasn't able to try that particular wine. 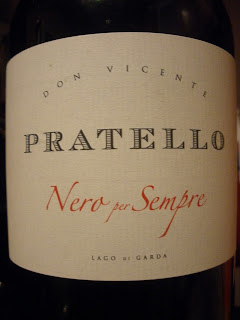 As mentioned above, the Nero per Sempre was sent to me as a sample bottle (online store here), and I'm not sure what retail on the bottle would be, though the importer told me it might be around $30 in Ontario.  As usual, I have not received any compensation for this review other than the bottle itself and what follows is my honest appraisal of the wine.  In the glass the wine was a deep, nearly opaque purple-ruby color.  The nose was fairly intense with delicious, fruity aromas of black cherry, blackberry jam, cocoa powder and dried cherries.  On the palate the wine was full bodied with fairly high acidity and soft medium tannins.  There were flavors of blac cherry, dried tart cherry, blackberry jam, bittersweet chocolate and espresso.  The wine clocks in at 15% alcohol and really shows it, as I found it very hot and a little clumsy.  It is an absolute whale of a wine, though, with huge, pure fruit flavors.  It doesn't have the depth and complexity of fine Amarone, but it also doesn't carry the whopping price tag either and if it's really only around $30, it's a very nice value for those looking for the Amarone experience on a budget.  It's such a powerful wine that I have trouble thinking of foods it might complement, and I find myself thinking that it's probably at its best after a meal, maybe with a little bit of cheese.