Xarel-lo is one of those grapes that most wine drinkers have probably had at some point in their lives, though many of them may not be aware of it.  It is grown on over 20,000 acres of land, nearly all of them in Spain, and it forms the backbone of one of the most popular and widely available wines on earth, but few people are even aware it exists.  Xarel-lo is kind of the ultimate team player.  It is an indispensable component of the wine that it has helped to make famous but it still plugs along in virtual anonymity.  It's a yeoman grape that hasn't been given its due so let's take a moment and have a look at Xarel-lo and its charms.

Xarel-lo is one of the three traditional grapes used in the production of the Spanish traditional method sparkling wine known as Cava.  Cava is made in the same way as Champagne and at one time was known as Spanish Champagne, though that practice had to be abandoned when Spain joined the EU in 1986 (it is still known locally as champán, champaña or xampany depending on where you are in Spain).  The other two grapes are Parellada, which we'll get to in a future post, and Macabeo, which is perhaps better known as Viura, the great white grape of Rioja.  Most Cavas are blends of some or all of these grapes, but the producers aren't under any obligation to inform the consumers about which grapes are used and in what proportions.  Most Cava bottles that you'll find in your local shops are mute about the components of their blend and it seems that most consumers really aren't that worried about it.

Many wine enthusiasts are under the misapprehension that only Parellada, Macabeo and Xarel-lo are used in the production of Cava, but this is not the case.  Most of the Cava that is produced is made from these grapes, but there are other grapes that are allowed.  Chardonnay, Pinot Noir, Garnacha, Monastrell and Subirat (which may be some form of Malvasia) are permitted for the production of your basic white Cava.  There is also rosé Cava which is made by adding in some still red wine made from Pinot Noir, Garnacha, Monastrell or Trepat (which is only allowed for rosé production) into the finished sparkling wine prior to bottling (most rosés are made by keeping the juice from crushed red grapes on the skins for a brief period of time to extract a little bit of color).  Cava is also a little bit different in that it is not a single geographically delimited area but is rather a collection of about eight different regions throughout Spain (though over 95% of it is made in Catalonia).

Those Cavas that are made from the three traditional Cava grapes are usually at least half Macabeo with Xarel-lo making up more of the remainder than Parellada.  Individual producers all have their own blends, though, and there are some varietal Cavas made from one of the three grapes, though these tend to be 100% Macabeo.  Xarel-lo is prized for its intense aroma and flavor profile which many believe is the ultimate source of Cava's unique character.  This uniqueness has also encouraged some producers to experiment with making varietal table wines from Xarel-lo which are generally being met with good reviews.  Cava production is really dominated by two producers and many smaller producers or growers are getting creative in order to find a niche in the marketplace for their grapes and wines.  Xarel-lo is rapidly establishing itself as a very good table wine grape and while table wines made from the grape aren't absolutely everywhere right now, they are slowly starting to show up more and more. 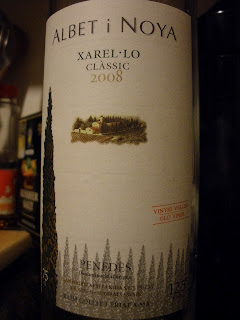 The only way to tell if the hype over Xarel-lo is genuine is to try some wines made from the grape and I was able to find two different still table wines made from 100% Xarel-lo grapes.  The first was the 2008 Albet i Noya "Classic" from the Penedes region of Spain.  I picked this up for about $14 from Marty's Fine Wines in Newton.  In the glass this wine was a medium lemon gold color.  The nose was reserved with green apple, lemon and pear aromas along with something a bit nutty, suggesting that this may be on the decline.  On the palate the wine was on the lighter side of medium with high acid.  It was really citrusy showing a lot of lemon flavors with a touch of lime and some tart green apple.  The fruit flavors were a bit washed out but they were definitely still there.  The flavor profile was simple and straightforward but the acidity kept it interesting and probably kept it alive in the bottle.  I enjoyed it, but I probably wouldn't go out of my way to pick this up again. 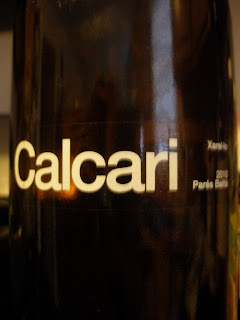 I couldn't help but wonder what a younger wine made from Xarel-lo might be like so when I came across the Pares Balta "Calcari" Xarel-lo at Curtis Liquors in Weymouth for about $15, I picked a bottle up for comparison's sake.  In the glass this wine was a fairly deep lemon gold color.  The nose was moderately aromatic with with a lot of green apple and candy apple flavors along with ripe pear and a touch of lime.  On the palate the wine was on the lighter side of medium with medium acidity.  There were flavors of green apple, lime, pineapple candy and a touch of apple cider.  It finished with a subtle, chalky kind of minerality.  Right out of the fridge, this wine was tight, simple and kind of boring.  It opened up a lot at room temperature and was more interesting, but still couldn't really rise above average.  It was definitely more interesting and more lively than the prior wine but I didn't really find either of them all that interesting.  I'd probably rather just drink a bottle of sparkling Cava to get my Xarel-lo fix and save myself $5 in the process.
Posted by Unknown at 7:31 PM