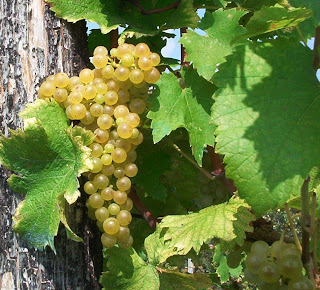 There's a lot to be confused about when it comes to the Friulano grape.  First of all, there's the fact that, historically, virtually no one has called it Friulano.  Traditionally it was known as Tocai or Tocai Friulano in the Friuli region of northeastern Italy or as Tocai Italico in the Veneto region where the grape is thought to have originated (though this may or may not be a different grape altogether).  The name was banned in 2007, though, because Hungary was able to convince the EU that the name Tocai may cause some confusion with their great sweet wine, Tokaji, which Friulano has absolutely nothing to do with, at least not anymore.  There's a theory that perhaps Furmint, the grape used in the Hungarian Tokaji, was the original grape used for a wine known as Tocai Friulano, but that certainly isn't the case today.  There's also a theory that some Friulano vines may have been brought into Hungary as a result of a 17th Century marriage between a Venetian princess and a Hungarian count, but regardless of whether either story is true or not, we do know that Friulano is not used in the modern day production of Tokaji and has no relation to any of the grapes that are.

There was some confusion about just what the grape would be called when the EU naming restriction came into effect in 2007 since there were a handful of other names that were somewhat widely used.  Two of the most widely used alternate names were Sauvignonasse and Sauvignon Vert (which is also sometimes a synonym for Furmint, confusingly enough), which might suggest some kind of a familial relationship to Sauvignon Blanc, but it turns out that there isn't one.  The two vines do resemble each other quite a bit, though, and this similarity has caused some notable confusion through the years.  At some point, though no one is quite sure when, some of the Tocai vines made their way into France, either from the Veneto or from Friuli, and eventually into Bordeaux, where they were mistaken for Sauvignon Blanc and planted among the Sauvignon Blanc vines already there.  When some of the Bordeaux vineyards sent cuttings from their fields over to Chile in the 19th Century, cuttings of Friulano made the trip as well since the proprietors were unaware of the mix-up in their vineyards.  Phylloxera eventually killed off the Friulano vines in Bordeaux, which were replanted with the correct Sauvignon Blanc vines in the aftermath, but since Phylloxera never came to Chile, the mistake persisted until the 1990's when some visiting ampelographers noticed the Friulano vines amidst the Sauvignon Blanc vines in many of the Chilean vineyard sites.  Most of those vines have been pulled up since then and planted with true Sauvignon Blanc vines so that total planting figures for Friulano in Chile (where it is called Sauvignon Vert ) stood at less than 200 hectares by 2000.

Friulano is also somewhat widely grown in Slovenia (where it was historically known as Tokaj), which is just to the east of Friuli.  The border between Friuli and Slovenia is fuzzier than in many other places and there is a distinctive mix of cultures around where the two countries meet.  There are actually a few Italian DOC areas whose borders extend onto Slovenian soil, which is a situation that I'm not aware of anywhere else on earth.  There is an ancient wine making history in the area where Slovenia is now situated, but it's a bit difficult to speak of a Slovenian wine tradition since the country has only existed as a sovereign nation since 1991.  It was a part of the Austro-Hungarian empire until that country was dissolved after World War I.  In December of 1918, it was included as part of the Kingdom of Serbs, Croats and Slovenes, which became the Republic of Yugoslavia in 1943.  Slovenia seceded from Yugoslavia in 1991 with mercifully little bloodshed and was recognized by the EU as an independent nation in 1992 and accepted as a member by the UN very shortly thereafter. 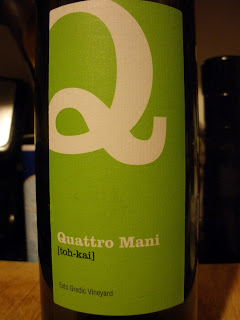 The first Friulano based wine that I tried was the 2008 Quattro Mani "toh-kai" from the Goriška Brda region of Slovenia.  Goriška Brda is an extension of the Collio region of Friuli onto Slovenian soil, meaning that it is very close geographically and traditionally to Italy.  I picked this wine up for about $10 from my friends at Bin Ends.  In the glass the wine was a medium lemon gold color.  The nose was moderately intense with lovely aromas of pineapple, white flowers, peaches and mint leaves.  On the palate the wine was medium bodied with medium acidity.  There were light pear, pineapple and lemon fruit flavors with a distinct and somewhat aggressive kind of vegetal and herbaceous edge to it.  There was a kind of stewed asparagus and tarragon character that I wasn't a particular fan of.  The nose was wonderfully fresh and perfumed but the palate just didn't follow through enough for me.  Wines made from Friulano are generally meant to be drunk young and this could have been a bit past its prime. 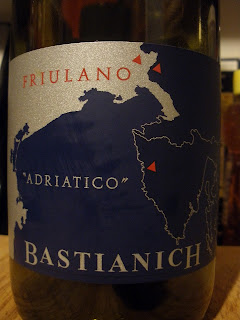 The second wine that I tried was the 2009 Bastianich "Adriatico" Friulano from the Friuli region of Italy.  I also picked this wine up at Bin Ends for about $13.  In the glass this wine was a medium lemon gold color.  The nose was reserved with peach and pear fruit along with some honeysuckle flower, orange blossom and marzipan.  On the palate the wine was medium bodied with medium acidity.  There were flavors of peach and orange fruit with a touch of honeysuckle flower.  There was also a touch of fennel to this wine, but the vegetal edge wasn't nearly as pronounced as in the prior wine.  Peaches were really the dominant flavor component with a some really nice flowery honeysuckle to boot.  I could have personally used a bit more acid, but it was fairly pleasant overall.  The general consensus on wines made from Friulano grapes is that they're nice enough but rarely have the depth or complexity of wines made from Sauvignon Blanc and I'd have to say that my experience matches up with that pretty well.  I doubt very seriously that I'll go very far out of my way in the future to drink Friulano based wines, but I certainly won't actively avoid them either.
Posted by Unknown at 4:26 PM

Ventosa Vineyards in Geneva, NY is making a very nice Friulano these days. TOH! from Italy is another good one. The name is an obvious in-your-face response to the name Tocai Friulano no longer being allowed in Italy.