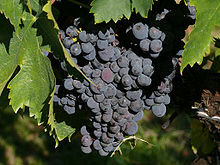 Over the past few weeks I've been profiling a series of wines that were given to me by Paul Turina of Turina Italian Wines.  I've recently written about a series of Groppello-based wines, a Vespaiola-based wine and a Grechetto-based wine which Paul was generous enough to share with me.  All of those wines were made with grapes that I'd not yet written about, but this final bottle was made from the Sagrantino grape, which I wrote about way back in January 2011.  Since I've already covered quite a bit of ground about the Sagrantino grape in that post, I've decided to feature this wine in my sporadic "Free Wine Friday" series and try to cover some of the ground that I may have missed in my previous post.

Though Sagrantino has been around since at least 1879 (when it was first mentioned in an Ampelographic Commission report), it isn't a particularly well known grape for a few reasons.  The first reason is that there just isn't that much of it.  There are only a few hundred acres planted to the grape (nearly all of them around the town of Montefalco in Umbria) and only a couple dozen producers who make any wine from it.  Further, wines made from Sagrantino were traditionally sweet dessert wines made from partially dried grapes.  The market for dessert wines hasn't been that great over the past few decades so very little of these wines were exported.  Table wine production has been on the rise over the past few decades, but the quality of these wines has been uneven since many producers have been unable or unwilling to invest in newer technology and/or techniques in their vineyards and in their wineries.

Most of the table wines that we see are bottled under the Sagrantino di Montefalco DOCG which covers both dry table wine production (secco) and dessert wine production (passito).  In order to qualify for the secco designation, the wine must be made from 100% Sagrantino grapes and must be aged for at least 12 months in oak barrels and at least 30 months altogether prior to release.  Why such a long time?  Sagrantino is an incredibly tannic grape and it typically requires several years of oak aging as well as some time in bottle before it is approachable.  Many producers actually exceed the minimum aging time prior to releasing their wines because of just how ferocious young, untamed Sagrantino can be.  Sagrantino is also allowed in the Montefalco Rosso DOC wines, but is only allowed to make up 15% of the blend at the most (the majority of these wines are made from Sangiovese grapes).

What was really interesting to me about the wine that Paul brought for me was that it was a 100% Sagrantino wine from the Montefalco region, but it was bottled as an Umbria IGT because it wasn't aged for the required period of time to qualify for the DOCG label.  The producer, San Clemente, makes a Sagrantino di Montefalco (and makes an excellent Grechetto which I reviewed in my post on that grape), but for some reason they also make this wine called "Ilucis" which is only aged for 9 months in barrel before release.  The bottle that Paul provided to me was from the 2009 vintage, which is apparently the first year that this winery has made this wine.  My best guess is that they've got some young vines that aren't yet mature enough to meet their quality standards for their DOCG level wine, but that's total speculation. 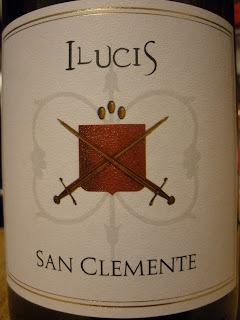 This wine was provided to me as a free sample so I'm not sure what the retail price for it is.  I believe it would be somewhere in the $20 range, which is significantly lower than you'd be able to find a Sagrantino di Montefalco for.  As usual I have not been compensated in any way for reviewing this wine other than by receipt of the bottle.  I do not have any business affiliation with Paul Turina, Turina Italian Wines, or any of their business associates.  In the glass this wine was a medium purple ruby color, which was a bit unusual since Sagrantino based wines are usually inky black due to the amount of time that the juice is left in contact with the skins after crushing.  For their DOCG Sagrantino di Montefalco, this particular winery leaves the juice on the skins for a whopping 21 days.  They don't specify how long the maceration period is for this wine, but you can bet it's nowhere near that long.  The nose was fairly intense with smoky, savory, meaty aromas along with black cherry and blackberry fruits.  On the palate the wine was on the fuller side of medium with fairly high acidity and fairly high tannins.  I was expecting to have the inside of my mouth ripped apart by this but the tannins were kept somewhat in check.  It was a big, brawny wine with black cherry and blackberry fruit with a hint of raspberry as well.  There was a distinct smoky, meaty, almost bacon-y kind of taste to it as well which did blow off somewhat as the wine opened up.  It was a bit harsh and probably could have used a bit more time in the bottle, but it was pretty nice overall.  It's certainly not as deep or complex as a DOCG Sagrantino di Montefalco, but it's a reasonable substitute for the money and is a good introduction for those curious about the grape but unwilling to shell out $50-$100 for a taste.  The high acidity and intense tannins demand food and I would lean towards grilled red meats to soak up some of those tannins.
Posted by Unknown at 3:50 PM