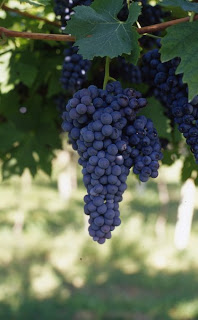 Last week we took a look at the Xarel-lo grape and noted that while it wasn't all that uncommon to find a wine with Xarel-lo in the blend, it was fairly uncommon to find a wine made from 100% Xarel-lo.  Today's grape, Corvina, is very similar to Xarel-lo in that it is also generally found in a blend with at least two other grapes and is rarely found as a varietal wine.  Since I was able to track down and try one of those unusual wines I thought I'd take a few minutes to share some information about it.

Corvina is the main component in the red wines of Valpolicella and Bardolino in the western part of the Veneto region of northeastern Italy.  Both of those wines are generally made from a mixture of Corvina, Rondinella and Molinara grapes though other grapes like Rossignola, Negrara Trentina, Oseleta, Barbera, Sangiovese or Corvinone are also permitted.  Bardolino is south of Valpolicella on the eastern shore of Lake Garda and tends to make lighter bodied wines.  In Bardolino, Corvina is required to make up 35 to 65% of the total blend for all styles and subregions.

The table wines of Valpolicella are thought to be more intense and deeper than those of Bardolino and Corvina is required to make up between 40 and 70% of the Valpolicella and Valpolicella Classico table wines.  Rondinella is required to make up 20 to 40% of the blend and miscellaneous grapes are allowed to make up the difference (to a maximum of 15%).  Molinara used to be a requirement in the blend but was thrown out when the area was applying for DOCG status as Molinara is not considered to be a quality grape (only Amarone and Recioto della Valpolicella were ultimately granted DOCG status in 2009).  For the famous and powerful Amarone wines of Valpolicella, made from dried grapes, and for the Recioto wines, made from passing Valpolicella wine over the dried grape skins left over from Amarane production, Corvina must make up between 45 and 95% of the blend, Rondinella 5 to 30% and miscellaneous grapes up to 25%.

For many years there was a grape grown in the Valpolicella and Bardolino regions which was known as Corvinone because it was thought to be a large-berried mutation of a Corvina vine (Corvinone means essentially "big Corvina").  A study done in 2003 has shown that Corvinone is actually a distinct cultivar from Corvina, and, further, that Corvinone doesn't appear to be related to any of the other Veronese grapes that were analyzed in that study.  Many online sources indicate that Corvina has a parent/offspring relationship with Rondinella, but I haven't been able to find any specific study that corroborates that assertion.  Most sites are just cutting and pasting the text from the Wikipedia entry on Corvina, whose citation points to the Oxford Companion to Wine, whose entry reads "DNA profiling at San Michele All'Adige in 2005 supported a parent-offspring relationship with Rondinella."  Those of you who have been reading this site over the last few months are already well aware of my issues with the OCW and their treatment of these kinds of issues, so I'll abstain from another rant on the subject and will merely direct unfamiliar readers to these posts on Hondarrabi Zuri (part 1 and part 2), Emerald Riesling and Ciliegiolo for context and background.  I will say that I was unable to locate the study they are referring to from that description and so I really can't say what the relationship is between Corvina and Rondinella.

In his Barolo to Valpolicella, Nicolas Belfrage writes that references to a wine called Corvini appear as early as 1627, though it isn't clear whether this reference is to the modern Corvina.  The first specific written reference to the Corvina grape (also known as Corvina Veronese,  Cruina or Cassabria depending on where you are) occurred in 1818, so its history in this region can be traced back at least that far.  He quotes one modern grower as saying that "Corvina is a great grape variety with a great defect," which is that the first few buds on the cane do not produce any fruit, so the vines have to be trained long and given plenty of space, which means that they can't be planted very densely and thus yields per hectare are fairly low.  The skins of Corvina are very thick which not only makes it resistant to rot or fungal diseases in the vineyard, but also means that it can stand up to the drying process necessary to transform it into Amarone with little trouble.  In 2010, a team at Verona University were able to fully sequence Corvina's DNA, and what they found was that there were over 400 different genes in Corvina that activated when undergoing the drying process which are responsible for many of the unique flavors found in Amarone wines.  Some of these genes were present in other grapes such as Pinot Noir, but they do not activate when dried and so those flavor compounds are not created. 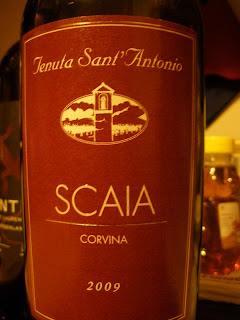 I was able to find a bottle of the 2009 Tenuta Sant'Antonio "Scaia" Corvina from my friends at Curtis Liquors for about $12. This bottle is an IGT because no DOC zone allows for a 100% Corvina wine.  I've come across a few different vintages of this wine and it seems like these guys like to change their label almost every year so whatever is available at your local shop may look much different from the picture at right.  In the glass the wine was a medium purple ruby.  The nose was moderately intense with red cherry, stewed berry and plum fruit with a touch of dry leather and espresso.  On the palate the wine was on the fuller side of medium with fairly high acidity and medium tannins.  There were strong cherry and red plum fruit with a bit of chocolate and spice. There was also a bit of dried cherry and espresso on the finish.  The wine was nicely balanced between juicy cherry fruit and earthy chocolate and coffee flavors.  Fans of Valpolicella or Bardolino will obviously find a lot to like here, and it should provide an interesting opportunity for aficionados of those regions to get a sense of what Corvina contributes to the blended final products there and what it is capable of on its own.
Posted by Unknown at 4:11 PM

How handy for me to find your post - so timely, as I needed a wine for a short story I am writing and, via other sources, found myself leaning toward the qualities of Corvina -- your detailed comments have convinced me that this is the wine I shall use. Thanks!
- judy

I was in Curtis liquors a few months a ago an decided to try this wine which was on sale for $10.99.
I agree with the folks at Curtis that this is a great wine for $10.99.