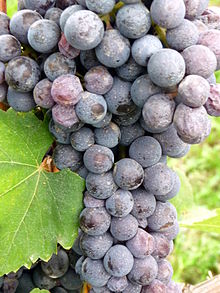 At some point in the next few hours, Fringe Wine will pass the 50,000 page view mark.  When I first started writing this blog, I had no idea if anyone would care about these grapes and wines and, further, I didn't know if anybody would care what I had to say about them.  The first full month that the blog was online I got a total of 21 pageviews.  The next month was somehow worse as there was only  a total of 20 pageviews.  I kept plugging away at it and slowly but surely traffic started to rise.  It has taken 19 months to get to 50,000 views, but if traffic holds steady, it will only take about another 7 to get 50,000 more (and if it continues to increase as it has, we'll get there in about half that time).  I've learned so much in the course of writing this blog and have gotten to meet many interesting and amazing people.  I'm blown away every day to see how many people are reading the things that I've written and am grateful to everyone who takes the time to check it out.

In celebration of reaching this milestone I'd like to write about a couple of really interesting wines I've had recently that were made from the Nebbiolo grape.  Nebbiolo is one of the world's great grapes, forming the base of two of the world's most spectacular wines, Barolo and Barbaresco.  I wouldn't ordinarily write about wines made from it, but these two wines were made in very unique styles.  One of them was a white table wine, similar in style to the Blanc de Franc I took at look at a few months back, while the other was a fully sparkling metodo classico rosé wine made by four young winemakers in Piemonte who became friends while attending oenology school together.  But before we get to those wines, let's take a look at the Nebbiolo grape and see if we can learn a bit more about it.

Nebbiolo's name is thought to come from the Italian word nebbia, which means fog and is a reference to the dense fog that tends to form in the Langhe river around harvest time each year.  To be as widely esteemed as it is, plantings of Nebbiolo are shockingly low and not geographically widespread at all.  It is planted on only about 5,000 hectares (about 12,700 acres) of land, which places it well outside of the top 20 most widely planted grapes in Italy (Aglianico sits at number 20 with just over 18,000 acres planted as of 2000).  For comparison's sake, Catarratto is planted on over 100,000 acres of land in Italy, but you'd have a much more difficult time finding a wine made from Catarratto at your local wineshop than you would one from Nebbiolo.  Nebbiolo is planted almost exclusively in northwestern Italy in various parts of Piemonte, the Valle d'Aosta and Lombardia.  There are plantings scattered in other areas of the world, but the grape just doesn't seem to do well outside of very selected areas in Italy.  It is a unique grape in that it seems to perform well in a few very specific, very small places and nowhere else.  Of all of the great wine grapes in the world, Nebbiolo is far and away the most scarce and prices for the best wines made from it definitely show it.

There are three main Nebbiolo clones that make up most of the plantings of the grape: Lampia, Michet and Rosé.  Nebbiolo Lampia is the most common of the three and is the vine we are generally referring to when we talk about Nebbiolo.  The Nebbiolo vine is particularly susceptible to viral infections and Nebbiolo Michet is essentially a Nebbiolo Lampia vine that has been infected with a particular virus which causes the vine's canes to fork.  In a presentation (link is currently dead...similar paper can be found here, in Italian) given at the Nebbiolo Grapes conference in 2004 (in Italian), a team of scientists reported that Nebbiolo Rosé is actually a genetically distinct variety, though it does have a parent-offspring relationship with Nebbiolo Lampia (though we don't know which way the arrow is pointing).  This team also found that Nebbiolo Lampia was very closely related to Freisa and to Vespolina, among a handful of other Piemontese obscuranda.  Decanter filed a report based on this presentation later that year where they claim that Nebbiolo is related to Viognier, though close reading of the article shows that they are overstating the case.  Since Freisa is related to Nebbiolo, then grapes that Freisa are related to are also grapes that Nebbiolo is related to.  The research team found that Freisa had a lot of genetic similarities to Viognier, but they stopped short of saying that there was any provable familial relationship and I've not been able to find any publications since that time which were able to comment on the case with any certainty.  It seems likely that there's some kind of relationship, but we just don't have enough evidence at this point to say one way or the other. 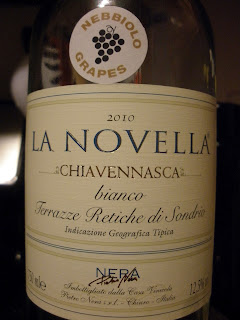 The first of the two wines that I'd like to talk about was the 2010 Pietro Nera "La Novella" from the Terrazze Retiche di Sondrio IGT, which I believe is in the Valtellina area of Lombardia.  The wine is made from 80% Nebbiolo and 20% Chardonnay and, as mentioned above, is a white wine.  I picked this bottle up from my friends at the Gypsy Kitchen for about $21.  In the glass the wine was a very pale silvery lemon color with some greenish tints to it.  The nose was moderately intense with aromas of pears and ripe red apples.  On the palate the wine was on the lighter side of medium with high acidity.  There were flavors of green apple and meyer lemon with some ripe pear and white peach.  It was sharp and zippy but had a bitter, pithy kind of finish.  From the nose you'd expect a broad, ripe flavor profile, but it's actually fairly lean and little bit tart.  It's a really cool wine and it's good, but the price is a little high for what you get.  It's an interesting novelty but it's hard to imagine buying a case of something like this. 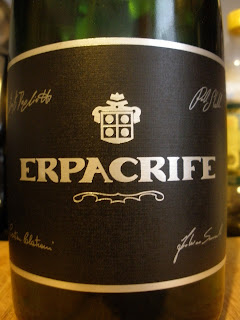 The second wine that I tried was the 2006 Erpacrife sparkling Nebbiolo which I picked up from my friends at the Wine Bottega for $75.  This wine is made by four young winemakers who met in oenology school and decided to make a sparkling Nebbiolo for their thesis project.  They continued to make it after they graduated by using the fruit from some of the younger Nebbiolo vines on their properties.  The name "Erpacrife" is a combination of the first syllable of each of their names: Erik, Paolo, Cristian and Federico.  It's a traditional method sparkler with no added dosage.  In the glass this wine was a medium pink color with vigorous bubble.  The nose was strikingly intense with candied strawberry and rose petal aromas.  On the palate the wine was light bodied with very high acid and intense bubbles.  The flavor was very floral with rosewater, dried strawberries and something a little bit tarry.  There wasn't a great deal of depth to the wine but the flavors were pure and intense.  $75 is a lot of money to pay for wine but this was so unique and so tasty that I wouldn't have any problem at all paying that amount again for another bottle.  It's really just a fantastic wine.
Posted by Unknown at 3:25 PM

Congratulations on the milestone! I find that your writings have taught me a lot more about wine than the typical blogs and articles...keep 'em coming!

I came across a couple of Nebbiolo/Chiavenasca Biancos while in the Valtellina recently. You are correct about the origin of the wine, and its IGT is named for the terraced vineyards that cling precariously to the southern facing slopes by the city of Sondrio. Sondrio lies at the heart of the wine-growing areas within Valtellina. I also had a similar impression of this wine style: good, but mostly a curiosity that is hard to place as Nebbiolo. Of course, there it is more like $10 so it makes a decent quaffer.

Also, if you follow my somewhat outdated profile to my blog The Cab Franco Files, there is a series posted on Valtellina. Notes on a couple of white Nebbiolo wines are embedded in a few places.

Conte Sartoli Salis produces a Nebbiolo "in bianco" as Chiavennasca, too....has a bizarre marzipan quality to it.