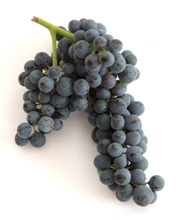 Calling something a "blending grape" is usually a nice way to say that it has some good qualities, but just isn't good enough to be made into a wine on its own.  So-called blending grapes are usually prized because they bring one or two nice things, like color or acidity, to the table, but they tend to be seriously lacking in some other oenological aspect.  Because of this, they typically are either used sparingly to add a little something to an otherwise mostly varietal wine, or in combination with other grapes whose collective shortcomings are overcome through the blending process.  These grapes are supporting actors at their very best and mere extras at their worst and are only rarely given the opportunity to shine on their own.

In the past few years, a few blending grapes, like Malbec and Carmenere, have actually achieved relative stardom as they've been planted in new locations that have allowed them to demonstrate qualities that many didn't know they possessed.  A new climate and a new terroir has shown that these are serious grapes that are capable of making serious wines.  It's much rarer, though, for a grape to rise from blending grape to star status in its native land, and while it may be a bit premature to call Susumaniello a star just yet, it certainly wouldn't surprise me if it rose to that level in the very near future.

Susumaniello is currently grown only in Puglia, the spike heel of the Italian boot, in the southeastern part of that country.  Some sources indicate that Susumaniello is an ancient grape, but I'm not sure what the evidence is for that claim.  The name Susumaniello means something like "the load of the donkey," because it is a prolific yielder as a young vine.  The grapes from these prolific harvests tend to make unappetizing, boring wines, but after about 10 years, the yields fall significantly and careful growers can make dense, full-bodied wines from the grapes.  It has historically partnered with Negroamaro and Malvasia Nera in the red and rosato wines of Brindisi, and has been prized for its ability to add color, acidity and alcohol to the final blend.  Jeremy over at Do Bianchi notes that as recently as 2006, the editors of the landmark Vitigni d'Italia (Grape Varieties of Italy) said of Susumaniello that it was never vinified on its own and was used strictly to produce vino da taglio, or a heavy, densely colored wine used to beef up thinner, less colorful bulk wines.  Over the past 10 years or so, though, many producers have been experimenting with varietal Susumaniello wines and the results have been very promising.

Many sources indicate that the grape likely came to Puglia from the Dalmatian coast of Croatia, just across the Adriatic Sea.  I'm not sure what the source of this bit of information is, but I'm not sure that it's right.  In 2008, a team of Italian scientists conducted a study to see whether they could link Sangiovese and Garganega to a host of other grape varieties in Italy.  They found that these two grapes had parent-offspring relationships to several different Italian grapes, but most importantly for our purposes, they found that Sangiovese had a parent-offspring relationship to Susumaniello.  The scientists believed that Susumaniello was likely an offspring of Sangiovese, though they were unable to determine the second parent.  It seems unlikely to me that the grape would be from Croatia with Sangiovese as one of the parents, so it's probably the case that Susumaniello is actually Italian, and given that it really isn't grown outside of a few small areas in Puglia, it's probably a safe bet that it's from somewhere around the Brindisi area. 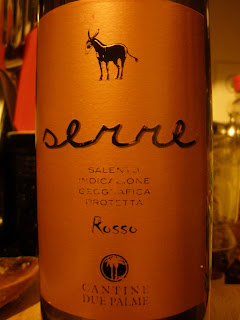 I was able to pick up a bottle of the 2006 Cantine due Palme "Serra" Susumaniello from my friends at the Wine Bottega for about $23.  In the glass the wine was a deep, inky, purple-black color with a very narrow purple rim.  The nose was fairly intense with smoky blackerry, charred meat, cedar wood and bitter chocolate aromas.  On the palate the wine was on the fuller side of medium with fairly high acid and low tannins.  There were flavors of tart red cherry, black cherry, blackberry and plum fruit along with some smoky chocolate.  The wine actually had a kind of tart, berryish quality to it and there was some zippy dried cranberry and cherry pit flavors as well.  The wine really walked a  line between bright berry fruits and dark, smoky earthy notes and did it pretty well.  If this wine is any indication of the quality of Susuamniello in general, I think it would be a shame to relegate this grape to mere blending status, as this wine was rich, balanced and very tasty.  I'm on the Susumaniello bandwagon now and hope to see it take its place among the other star red grapes of southern Italy.
Posted by Unknown at 3:29 PM