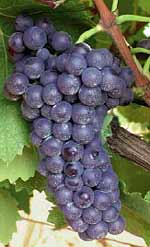 I know that this probably isn't news to any of you, but there are a lot of different grapes grown in Italy.  It is estimated that there are over 2,000 grape varieties that are indigenous to Italy, though only (only!) about 400 of them are authorized for use by Italy's Ministry of Agriculture.  The top 20 most planted grapes in Italy  represent only about 5% of the total varieties approved for use (and only about 1% of the total varieties estimated to exist within the country), but they account for almost 60% of the total plantings, meaning that the hundreds of other grapes in Italy, which represent about 95% of the approved varieties (or 99% of the total estimated varieties), account for only 40% of the nation's total plantings.  It's not quite as dramatic (or as important) as the inequities that prompted the Occupy movements of 2011, but there's a comparison to be made there, if you so desire.  This is a wine blog, though, and not a political or economic blog, so let's leave that stuff behind and concentrate on the Centesimino grape, which is what we all came here for today.

Centesimino is a relative newcomer to the Italian wine scene, as references to the grape can only be traced back to the mid 20th Century, with some sources indicating that the grape was being cultivated as early as World War II and others saying that it really started around the 1950's.  The story goes that an Italian fellow by the name of Pietro Pianori discovered the vine growing in a garden in the center of the town of Faenza in the Ravenna province in the eastern part of Emilia-Romagna.  This garden had high walls surrounding it that supposedly prevented the phylloxera louse from getting inside, and this vine was able to survive the epidemic.  Pianori took a cutting from the plant and began to cultivate it on his estate.  When the grape grew well, a few other farmers took cuttings from Pianori's vines to plant themselves, and today all of the Cenetesimino vines in existence can be traced back to Pianori's "Terbato" estate.  Pianori was apparently something of a miser and one of his nicknames was Centesimino, which means something like "little cent," but which is idiomatically used to denote one who is excessively careful with their money.

The grape is also sometimes known as Savignôn Rosso or Sauvignon Rosso, though it has no relation whatsoever to either Cabernet Sauvignon or Sauvignon Blanc.  The origin of this name is a little unclear.  One story has it that a man named Paolo Visani commissioned a local art publisher to create specialized labels for Centesimino wines that he was trying to sell.  Visani, for whatever reason, put "SAUVIGNON – vino rosso di Faenza" on the label, though whether this was a stroke of his own imagination or merely a reflection of what the locals were calling the grape is difficult to say.  The latter explanation is probably more likely, as there's very little chance that Pianori was calling the vine Centesimino, so he may have called it Sauvignon Rosso because of the wild condition that he discovered the vine in.  Whatever the story was, there was no way that the grape would receive any official recognition with a name so similar to Cabernet Sauvignon, so the official name of the grape became Centesimino in honor of Pietro Pianori, the man who saved it from oblivion.

Centesimino was included in the Italian national catalog of vine varieties in 2004 after a round of testing to determine whether it was actually different from other grapes in cultivation in Italy (source, in Italian, for this entire paragraph is here).  It was said to resemble Alicante Bouschet and Grenache vines and had to be conclusively differentiated from them before being allowed to enter the registry.  The first round of tests (using an older DNA testing method known as isoenzyme analysis) showed that it was definitely distinct from Grenache and Alicante Bouschet, but the tests showed similarities between it and seven other grapes (interestingly, among those seven were Cesanese and Ciliegiolo).  The second round of tests was more conclusive and Centesimino was shown to be distinct from the other grapes in the national catalog.  Centesimino became official on May 7, 2004.  I do not believe that it is allowed in any DOC wines at the moment, but it is permitted in the Ravenna IGT.  There are a total of 8 producers who grow the vine today and all of them are located around the town of Faenza where the grape was discovered.

The wine that I was able to try was the 2009 Poderi Morini "Savignone," which I picked up from my friends at the Wine Bottega for about $20.  Morini's website explains why they elect to call the wine Savignone rather than Centesimino:

Dedicated to the great Gino Veronelli, a well-known Italian wine expert who believed that the name “Centesimino” belittled this great native variety and preferred to call it Savignone, the Italian translation for “Savignôn”, its name in the local dialect.

Poderi makes a few different Cenetesimino based wines.  Their "Traicolli" bottling is aged in wood for a year before being bottled, while this wine is stainless steel tank fermented only prior to bottling.  They also make a sparkling wine from Centesimino grapes that they call "morosé" which comes from some of the younger vines on the property (and which I would love to get my hands on).  Production is fairly small for all of these wines with about 5,000 bottles of the Traicolli and 6,000 bottles of the Savignone and morosé made each year. 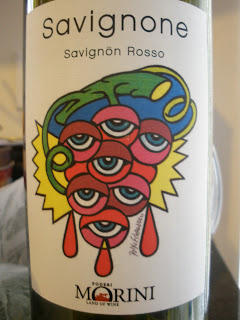 In the glass this wine was a fairly deep purple ruby color.  The nose was fairly intense with black cherry, black plum and dusky raspberry fruit with something pleasantly funky about it.  On the palate the wine was on the fuller side of medium with medium acidity and light tannins.  There were flavors of black cherry and blackberry fruit along with some charcoal, licorice and a lot of black plum.  The stainless steel treatment for this wine really allowed the fruit to shine through, and the fruits in this wine are pure, intense and gorgeous.  I was so taken with this wine that I chose it as one of the two bottles I brought to the BYOB dinner at Taste Camp Virginia this past year.  I don't know if the other attendees were as enamored with it as I was, but I can definitely say that this is one of the better wines that I've tried in the course of doing this blog.  This grape is now on my "buy on sight" list, though I don't have high hopes for finding many more wines made from it.  If you run across it, definitely pick it up and give it a shot.
Posted by Unknown at 3:21 PM

made me curious, I will get a bottle here in Tuscany...

Good to have found your blog as my interests and yours seem similar. Looking forward to someday hearing about longanesi........salute