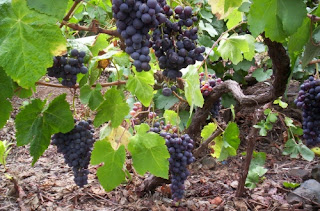 Pop quiz time: what Vitis vinifera grape has been grown in California the longest?  Though Chardonnay and Cabernet Sauvignon are currently the kings of California viticulture, they are relative newcomers compared to the Mission grape.  It is thought that the Mission grape was first brought to California in the mid 18th Century, and it was pretty much the only grape grown in the entire area until the  late 19th Century, though there are less than 1,000 acres remaining in California today.  At this point, you might notice that the title of today's post says Listán Negro from the Canary Islands and not Mission from California and may be wondering just what is going on.  Hold on to your hats and we'll see how these two grapes and two areas nearly 6,000 miles away from one another are related.

Those of you up on your American history will remember that before California became a part of the United States, it was a part of Mexico, and before that, it was a part of Spain.  Way back in the 15th Century or so, when Spain colonized a new region, one of the first things that they did was set up missionaries there in order to spread Christianity throughout their new colonies.  Wine was an important part of religious life, as it was used in many different ceremonies, but the Spanish had difficulty shipping wine across the Atlantic Ocean to its new colonies in the Americas.  The wine typically spoiled before it arrived at its destination, so rather than ship barrels of wine to the new colonies, the Spanish began to send vines instead.

The vines were first sent to the Spanish colonies of Peru and Mexico in the early 16th Century.  As the missionaries moved north through Mexico and into modern-day Texas, they established missionary outposts and planted grapes so that the missions could produce all of the sacramental wine that they needed. The most popular grape came to be known as Mission, for fairly obvious reasons.  This grape was adaptable to a wide range of climatic conditions and also tended to yield very generously, though the wine made from it wasn't particularly good.  Since this was sacramental wine and not quality wine, this particular flaw was overlooked , and the grape slowly worked its way through the American southwest in the 17th Century before finally making it to California around 1769.  For many years, Mission was the only grape grown in California, and it can be said that the foundation of California wine making was built with the Mission grape.

You might be thinking that Phylloxera was the ultimate undoing of the Mission grape, as it was a Vitis vinifera vine and is susceptible to the louse, but that's not the case.  Phylloxera was mostly an issue in the eastern United States and it didn't make its way into California until the late 19th Century.  Before Phylloxera hit, California became a part of the United States in 1847 and the importance of the Spanish missions began to decline.  There was also the gold rush in the mid 1800's which brought a huge wave of immigrants who were seeking their fortune.  The gold rushers needed something to drink and a number of private wineries were founded to provide for these thirsty prospectors.  Nobody was really crazy about the wines made from the Mission grapes, so other grape varieties were brought in in large numbers.  By the time Phylloxera finally did arrive in California, Mission was already mostly on its way out and Phylloxera was merely the final nail in its coffin.

All of which is very interesting, but we're not here to talk about Mission, we're here to talk about Listán Negro.  Listán Negro is also known as Listan Prieto or Palomino Negro, and it is the red-berried form of the same Palomino vine used in Sherry production on the Spanish mainland.  Listán Negro is hardly grown at all on the European mainland, but it is widely planted on the Canary Islands, where it covers almost 12,000 acres of land.  The Canary Islands are a small archipelago located off the western coast of Africa (map) which belong politically to the nation of Spain and have for many centuries.  The Canary Islands were often the last stop for ships headed to the new world colonies in the Americas, and it is thought that Listán Negro was originally from mainland Spain, but was brought to the Canary Islands by Spanish settlers.  From there, the vine was carried to the new world colonies, particularly those in the Americas, and planted.  Phylloxera wiped out virtually all of the Listán Negro planted in Europe, but the louse never reached the Canary Islands and so the vine has continued to flourish there.

In 2007, a Spanish research team (citation below) discovered that vines growing in California under the name of Mission were identical to many vines growing in South America under the names of País and Criolla.  Furthermore, all of these vines were identical to Listán Negro, which means essentially that the Listán Negro of the Canary Islands is the same as the Mission grape that was grown so widely in the early days of California viticulture!  Though Canary Islands wines aren't exactly widespread, they are much easier to find than California wines made from the Mission grape, so if you've always wondered what wines from the Mission grape might be like, just hunt down a Listán Negro based wine and give it a try. 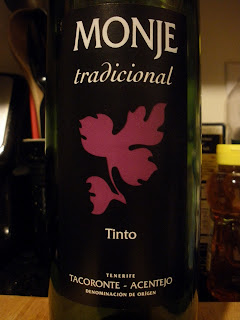 I was actually able to find two different Listán Negro based wines, both from the island of Tenerife in the Canary Islands.  Tenerife is located right in the middle of the Canary Islands archipelago (map), and it is dominated by the Teide volcano, which is the highest mountain in Spain and the third tallest volcano on earth.  There are a handful of sub-regions on Tenerife, and this 2008 Monje "Tradicional" (which I picked up from my friends at the Spirited Gourmet for about $23) is from the Tacoronte-Acentejo region in the northwestern portion of the island. This wine is mostly Listán Negro with a little bit of Negromoll blended in.  In the glass the wine was a medium purple ruby color.  The nose was moderately intense with bright black cherry and crushed berry fruit along with a touch of smoky charcoal.  On the palate the wine was medium bodied with fairly high acidity and medium tannins.  There were flavors of black cherry and black plum fruit along with smoky char, baking chocolate, coffee and black pepper.  It was very dark, smoky and spicy with nice black fruits.  I found it pretty enjoyable and think it's probably priced about right at just over $20. 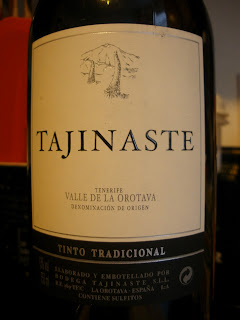 The second wine that I tried was the 2010 Bodegas Tajinaste Tinto Tradicional ($25), which is from the Valle de la Orotava region of Tenerife.  This area is on the western side of the island in the foothills of the Teide volcano.  In the glass the wine was a fairly deep purple ruby color.  The nose was very intense with wild, brambly crushed blackberry, raspberry and red currant fruit.  On the palate the wine was on the fuller side of medium with fairly high acidity and low tannins.  There were flavors of black cherry and wild blackberry fruit, smoke and tar.  Right out of the bottle this was very smoky with lots of dark black fruits, but as it opens up, the smoke blows off a bit and the fruits move more towards the red end of the spectrum.  This wine was  bit more energetic and wild than the other example and its relative youth probably had a lot to do with it.  Both wines were very good, but neither really represents a great value.  If you're a value wine shopper, the Canary Islands really aren't for you, though, as prices for these wines tend to be on the high side.  They're unique and distinctive, though, and offer opportunities to not only taste interesting grapes, but also historical ones as well.