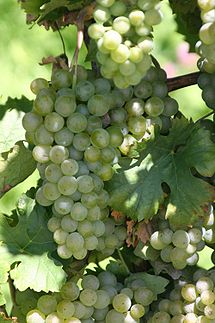 It may be a stretch to consider Müller-Thurgau a fringe grape.  It is planted on about 40,000 acres of land in Germany alone and as recently as the early 1990's, it was the most widely planted grape in that country (Riesling surpassed it in the late 1990's and has been pulling away ever since).  There are also significant plantings of Müller-Thurgau in Austria, Switzerland, northern Italy, Slovenia and much of eastern Europe, and Müller-Thurgau is thought to be the most widely planted deliberate crossing on earth.  I was on the fence about including Müller-Thurgau here, but there were a few things that swayed my decision.  First of all, it was much more difficult than I thought to actually buy a bottle of varietal Müller-Thurgau wine.  Secondly, when I finally did find a bottle, it was from Italy and not Germany, which isn't all that unusual, but it's not all that common either.  The biggest reason I decided to write about Müller-Thurgau, though, was because of the really interesting story of its pedigree, and how that pedigree remained a mystery for more than 100 years.  Much of the information below can be found in this paper, which ultimately solved the mystery of Müller-Thurgau's parentage in 2000, 118 years after its creation, and any papers that are not directly linked below are cited in that piece (most of them are in German and so even if I could access them, I'd have no idea what they said).

The Müller-Thurgau grape was created in 1882 by Dr. Herman Müller, who was born in the Swiss Canton (something akin to a state in the US) of Thurgau, which is located in the northeastern part of Switzerland.  Thurgau is bordered to its northeast by Lake Constance, which separates Switzerland from southwestern Germany.  Dr. Müller created this grape, known as No. 58, while he was working at the Geisenheim institute in Germany, but took it with him (along with the cuttings of about 150 other seedlings he had been working on) when he assumed the role of director at a research institution in Switzerland in 1891.  No. 58 was first propagated in 1897, and in 1913, a Franconian grapevine inspector named August Dern brought cuttings of the vine back into Germany.  Dern gave the grape the name Müller-Thurgau, and by 1930, experimental plots of the vine were being grown in every winegrowing region in Germany.  Müller-Thurgau plantings soared after WWII when Germany was trying to rebuild their wine industry and replant their vineyards quickly, as Müller-Thurgau is a generous yielder that is very easy to work with in the vineyard and the winery.  Plantings have been steadily declining in Germany since the late 1970's, but it is still responsible for about 15% of the total plantings in Germany, and is the 2nd most planted grape in that country.

The parentage for No. 58 was given as Riesling x Silvaner, but doubts about this were raised quickly.  Dr. Müller wrote a letter to Dern at one point informing him that the cuttings that he brought into Germany from his lab were not the offspring of a Riesling x Silvaner cross, but no correct parentage was offered by Dr. Müller either.  Some believed that the vine was a selfling of Riesling, meaning that a Riesling vine pollinated another Riesling vine and the resulting seed was planted.  An ampelographical study done in 1957 by a man named Eichelsbacher attempted to rule out Silvaner as a parent by analyzing the shapes of the leaves and tips of Riesling, Silvaner, Müller-Thurgau, but ampelography has never been an exact science and Eichelsbacher's theory never gained universal acceptance.

In 1994, a German research team performed an RAPD analysis (an early form of genetic testing that has been supplanted by microsatellite testing in more recent years) on Riesling, Silvaner and Müller-Thurgau (source).  Their analysis was able to show that Riesling was one of the parents of Müller-Thurgau, but Silvaner definitely was not the other.  In 1996, another German research team proposed that the other parent could be a member of the Chassleas family and their research seemed to confirm their hunch.  Their analysis only analyzed 8 microsatellite markers, though, and most scientists believe that at least 20 sites should be analyzed for conclusive results.  In 1997, another research group ran a more extensive analysis and were able to rule out Chasselas as a parent of Müller-Thurgau, but they discovered that it was a grandparent.  The other parent of Müller-Thurgau was actually a grape called Admirable de Courtiller, which is a table grape bred by a guy named Courtiller in the 19th Century by crossing Chasselas with Bicane.

The DNA evidence was unequivocal, but many found the results hard to believe.  Müller-Thurgau did not resemble Admirable de Courtiller at all physically and you would expect that some physical characteristics would be passed on from a parent to its offspring.  In 2000, another German research team set out to re-test Riesling, Admirable de Courtiller and Müller-Thurgau.  The team requested leaf samples for each of the vines from two different holding facilities.  The first set of samples came from Kolsterneuburg, Austria, which was where the 1997 research group got their material, while the second set came from Geilweilerhof, Germany.  Once the leaves arrived from each institution, the team noticed that the samples for Admirable de Courtiller from each institution didn't match one another at all.  Their ampelographic analysis led them to believe that the sample from Kolsterneuburg was actually from a grape called Madeleine Royale, which is a fairly common table grape bred in the mid 19th Century.

What had happened was essentially the same thing that happened with Hondarrabi Zuri in Spain.  The accession for Madeleine Royale was mislabeled in Kolsterneuburg as Admirable de Courtiller, and so the team that obtained their samples from that holding facility in 1997 were misled as a result.  When the 2000 research group ran the parentage studies on the correct version of Admirable de Courtiller, they were able to rule it out as a parent.  The group also checked Madeleine Royale as a parent and confirmed that Müller-Thurgau was the result of crossing Riesling and Madeleine Royale.

The story isn't quite over, though.  A guy named Moreau-Robert created Madeleine Royale in 1845, but there was no record of the grape's parentage.  It was long suspected to be an offspring of Chasselas, but its pedigree wasn't scientifically investigated until 2010 when a Swiss duo was able to conclusively show that Chasselas could not be a parent to Madeleine Royale.  What was more surprising, though, is that they were able to show that Pinot and Schiava Grossa were almost certainly the real parents of Madeleine Royale, meaning that Pinot and Schiava are also the grandparents of Müller-Thurgau.

There is still some confusion in many reference materials about Müller-Thurgau's true parentage.  Oz Clarke's Grapes & Wines and Stephen Brook's The Wines of Germany continue to list the parents as Riesling x Admirable de Courtiller, and when I first learned about Müller-Thurgau a few years ago, the material that I was reading (which I can't recollect or seem to find again) listed the parentage as Riesling x Silvaner.  This mistaken parentage is perhaps still perpetrated in part by the fact that one of Müller-Thurgau's most widely accepted synonyms is Rivaner which is clearly just a contraction of Riesling and Silvaner.  There are a lot of German crossings that were the result of a Riesling x Silvaner cross, because many scientists have been trying to combine the quality of Riesling and the hardiness and high yields of Silvaner, but so far none have been particularly successful. 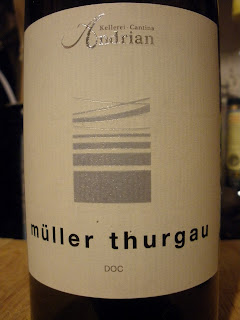 I was able to try a 2008 Andrian0 Müller-Thurgau from the Alto Adige region of Italy.  I picked this bottle up for about $13 locally.  In the glass the wine was a medium lemon gold color with a greenish tint.  The nose was fairly intense with white pear, lemon, white flowers and peach.  On the palate the wine was medium bodied with medium acidity.  There were flavors of tart green apple, lemon, pear and under-ripe pineapple.  It finished with a bitter, pithy kind of flavor that wasn't all that nice.  Overall this wine was fairly non-descript and average, as a lot of wines made from this grape tend to be.  The Oxford Companion to Wine calls it "the bane of German wine production" because of the oceans of bland, sickly sweet wines that were pumped out of Germany from the 1970's up to the modern day.  This is better than most of the junk that comes out of Germany under the Müller-Thurgau or Rivaner name, but it's still nothing all that exciting.  The story of the grape is definitely more fascinating than the wines that are made from it.
Posted by Unknown at 4:25 PM