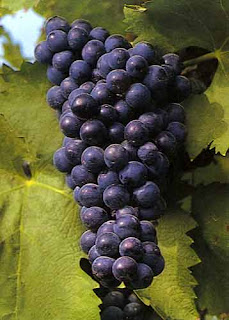 It is often the case when you are talking about grapes that you are actually talking about families of grapes that are all very closely related.  Sometimes all of the individual variants are grouped together under a single grape heading and the differences are chalked up to clonal variation.  Sangiovese is a good example of this kind of grape.   There are a large number of different "strains" of Sangiovese grown, but virtually everywhere you go, people consider the grape to be Sangiovese, even though the wines made from the grapes can be very different from one another.  One only has to think of the difference between the wines of Chianti and of Brunello di Montalcino to see the effect that clonal variation and selection can have.  Pinot Noir is another good example, but we have made allowances for a few Pinot variants to be recognized as individual grapes.  Pinot Blanc, Pinot Gris and Pinot Meunier are known to be mutations of Pinot Noir (as all clonal variants are), but are considered distinctive enough to warrant consideration on their own.

What's never been clear to me, and isn't fully clear even now, is when exactly a clonal variant or mutation is significant enough to consider the new grape on its own.  Skin color is obviously a major factor, and we have no problem accepting that Pinot Gris, Pinot Blanc and Pinot Noir are different enough from one another that we should consider them separately and on their own merits, even though most modern genetic marker testing for grapes would be unable to tell that the three grapes are different at all.  In other words, if you ran the genetic testing that is done to test for grape parentage on those three grapes, the test would come back that all three were in fact the very same grape.  This says more about the limits of modern genetic testing than it says about the similarities between the grapes, but it has always struck me as interesting.

The issue gets really tricky when you start to look at very old grapes and the families that have sprung up around them.  Some grapes mutate more quickly than others, but virtually all of them do mutate and when you look at those grapes over a long enough period of time and over a fairly large geographical distribution, you inevitably end up with some confusion.  With these grapes, the geographic dispersal seems to be one major key.  What it seems like may have happened is that as the grapes spread out geographically, the local growers began to select clonal variants that were more appropriate for their terroir (or, perhaps that just sold better in that particular region) and these variants spawned their own variants until, over time, you end up with enough genetic diversity to merit consideration as individual grapes, but these grapes are still closely related enough that they can fall under the same family banner.  Consider the Muscat grape, for example.  The Wine Century Club, while not an official mediator of these kinds of disputes, is interesting in that they accept three different white Muscat grapes as distinct and eligible for reaching 100, though Sangiovese and Brunello are not listed separately and, one assumes, would not be counted twice if one were to write Brunello in.

The Malvasia "family" is similar in many ways to the Muscat "family."  Both are extremely old and are grown in many different wine regions, though members both can be traced back with relative certainty to Greece.  There are two competing theories for Malvasia's origin.  The first is that the grape's name comes from the Monemvasia fortress off the Peloponnese coast that was controlled by Venice through the Middle Ages (there is a grape known as monemvasia in Greece today which is apparently unrelated to Malvasia).  The Venetians were heavy traders of wine and became so heavily involved in the Malvasia game that their shops in Venice were known as malvasie.  The other theory maintains that the grape's name comes from the district of Malevizi on the island of Crete.  Whatever the case, Malvasia spread through the ancient world and has retained an impressive presence today.  While many of the grapes that have the name Malvasia are related to one another in some way, many of them are not related at all, so to speak of a Malvasia "family" isn't entirely accurate.  Malvasia is more of naming group and it isn't altogether clear how or why many of the grapes called Malvasia got tagged with that particular name.

Most Malvasia grapes are white, but there are a handful of red ones as well.  The most common variety, and the one this wine is mostly likely made from, is called Malvasia Nera di Brindisi.  It is grown in a few regions in Italy, though it is most often used as a blending grape as the wines produced from the grape tend to be deeply colored, powerfully aromatic and softly textured.  It was once a major blending grape in Tuscany, but is being supplanted there by Cabernet Sauvignon more and more these days. It is perhaps easiest to find in the Negroamaro based wines of Puglia in southern Italy (especially Salice Salento, where it typically comprises 10-15% of the blend), and in fact, Negroamaro is one of the parents of Malvasia Nera (the other is Malvasia Bianca Lunga, which is the most common white-skinned variety of Malvasia in Tuscany).  There are two DOC zones within Italy (both in Piemonte) that allow for varietal bottlings of Malvasia Nera, but the total area covered by these zones is less than 100 hectares, and the specific variety of Malvasia Nera is different there (Malvasia di Casorzo is used in the Casorzo region of Piemonte while Malvasia Nera Lunga is primarily used in Asti). 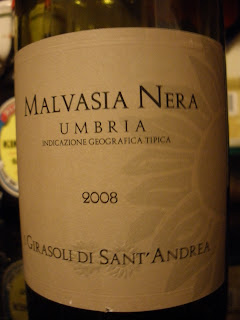 The grape is also apparently grown to some extent in Umbria, as I was able to find a bottle of the 2008 I Girasoli di Sant'Andrea Malvasia Nera for about $15 from Bauer Wine and Spirits in Boston.  The wine was bottled as an IGT since there is no DOC zone that allows 100% Malvasia Nera within Umbria.  In the glass, this wine was a medium purple ruby color.  The nose was fairly aromatic with candied red cherry fruit, chocolate and flowers.  It smelled a bit like chocolate covered dried cherries.  On the palate the wine was on the fuller side of medium with medium acidity and medium tannins.  There were flavors of cocoa and espresso with a touch of dried cherry and black fruit, but on the whole, there was very little fruit to this wine.  It was dominated by bitter, earthy chocolate and coffee flavors with a sawdust or pencil shavings character to it as well.  The wine tasted lean and austere, despite the fairly weighty body on it, since there was virtually no fruit to fill it out.  It's hard for me to imagine the kind of person who would take pleasure in a wine like this, to be perfectly honest.  You'd probably be better off throwing a shot of Bailey's in your hot cocoa if you're in the mood for those kinds of flavors with an alcoholic kick to them.

For a further discussion on grape families and the distinction between clones and individual varieties, see my Roter Traminer post published the day after I wrote this piece.
Posted by Unknown at 3:19 PM

I sell girasoli in concord at our shop and find the Malvasia compelling and for many Italians bitter as in amaro is very appealing. It's a tough sell for the fruit bomb and explosive alcohol California buyer but for real wine drinkers and Italians not such a far stretch for the palate to understand.

Find it difficult for someone to enjoy this wine? You mean anyone that isn't a typical California snob or someone that isn't only drinking new world fruit bombs that are alcohol explosions?

Maybe look around a little bit more before getting all hostile and throwing accusations around. I'm hardly a California snob or a fruit bomb/alcohol explosion kind of drinker. I didn't like this wine and that's all I said. Take your ad hominem junk and go cool off somewhere else.