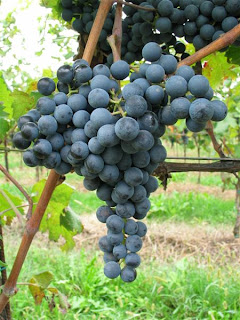 Let's go ahead and get this out of the way: yes, Marzemino was mentioned in Mozart's opera Don Giovanni.  Just before being sent to Hell, Don Giovanni says, "Versa il vino! Eccellente Marzemino!"  Which means something like, "Pour the wine!  Excellent Marzemino!"  Every single source that has anything to say about the grape relates that little vignette (including the blurb on the back of today's bottle), so in that grand tradition, there you go.  You have to wonder about a wine who's major claim to fame is a throwaway line in a 300 year old opera.  Marzemino is certainly not held in that kind of esteem these days, as the most enthusiasm that The Oxford Companion to Wine can muster is to call the grape "interesting," while Nicolas Belfrage (in his Barolo to Valpolicella), in a colossal feat of back-handed complimenting, says "there is no producer today, as far as I am aware, whose wine may be described as 'eccellente,' but then even a hamburger might be delicious if your next stop is Hell."  I happen to think that hamburgers are delicious in all sorts of circumstances, so I was very curious to check out Marzemino for myself.

Marzemino is a fairly old grape, known in northeastern Italy since at least the 16th Century.  It is thought to be native to this area, but solid evidence was lacking until recently (there's an alternate theory that it may originally be from around the Marzemin village in Austria, but I can't find any corroboration for that).  DNA testing has shown that Marzemino has a parent-offspring relationship with both Teroldego and Refosco dal Pedunculo Rosso, both of which are indigenous to northeastern Italy.  It is also a full sibling of Lagrein, meaning that both grapes share the same set of parents.  In my Refosco post, I was confused about the exact nature of the Marzemino-Refosco relationship, but a family tree on this page was most helpful in sorting that out.  What's going on is that Teroldego and an unidentified grape are the parents of both Marzemino and Lagrein, while Marzemino and another unidentified grape are the parents of Refosco.

Marzemino can be a high yielding vine, which may explain why it is still around despite its many problems in the vineyard.  It ripens late, which can be an issue in the some of the cooler areas of northeastern Italy (and which may explain the high occurrence of grassy and herbaceous notes that litter many descriptions of wines made from the grape).  It is also highly susceptible to a large number of fungal diseases which can make it a challenge to grow in wetter regions.  Yield control and proper planting are needed to produce quality wines from the grape since, as mentioned above, it can yield very large crops and suffers badly if planted at very high densities.  All of this adds up to a very high maintenance vine for quality production.

As Mozart's mention of the grape indicates, there was a time when Marzemino was rather in fashion.  It was a big deal in Austria for awhile, and still enjoys a certain popularity there to this day, but on the whole, Marzemino's star has fallen in more recent centuries and the grape has become more of a local phenomenon than an international player.  These days, most Marzemino is grown in the Trentino region of Italy, though there are also plantings in Lombardia, Friulia and the Veneto.  There may well be plantings in other countries, but you'd be hard pressed to find a varietal Marzemino outside of northern Italy. 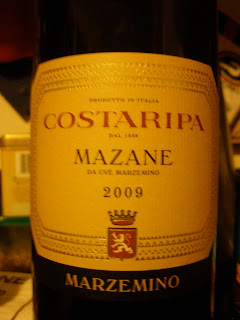 I was able to pick up a bottle of the 2009 Costaripa "Mazane"  Marzemino for about $20 from my friends at Curtis Liquors.  The wine is from the Garda DOC (named for Lake Garda) which straddles both the Veneto and Lombardia, but this estate is located in Brescia, which I believe is on the Lombardy side of the border.  All the grapes for this wine come from a single vineyard on the hillsides bordering Lake Garda.  The yields are kept low and the wine sees very little oak with most of it fermented and matured in stainless steel.  In the glass, the wine had a medium ruby color.  The nose was medium intensity with red cherry, strawberry and stewed raspberry fruit aromas.  On the palate the wine was medium bodied with fairly high acidity and medium tannins.  There were flavors of sour cherry and wild strawberry fruit with a touch of leather and a little funk on the finish.  If someone asked you to describe a typical Italian food wine, you'd probably come up with something that very closely resembled this. The fruit flavors here are straightforward without being Kool-Aid simple and there's just enough tannic grip and acidic bite to complement a wide variety of foods, but especially tomato sauce based foods.  You can drink this on its own, but you'll get so much more out of it with something on your plate.  It's definitely not the kind of bottle that I'd reach for before being sent to my ultimate demise, but it's nice and is especially worth checking out for Chianti fans.
Posted by Unknown at 12:56 PM