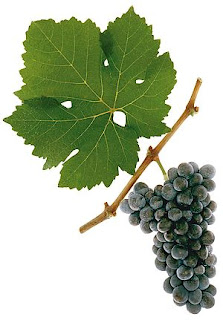 Today we head back into Austria to take a look at the St. Laurent grape.  Like seemingly every grape that we take a look at here, St. Laurent's past is somewhat murky and a little controversial, though recent research has helped to shed some light on certain parts of its parentage and history.

Galet did have part of the story right, though, as he surmised that the grape came into Germany and Austria via Alsace.  The evidence seems to bear this out, as there are references to the St. Laurent grape in southern Alsace dating back to 1850, and the grape's entry into Germany can be traced precisely to 1870 when a German grower purchased some St. Laurent vines from a viticulturist in Alsace.  Some sources presume that the grape is named St. Laurent for the town of the same name near Bordeaux, but since there isn't really any Pinot Noir or Pinot offspring grown in the region, that explanation doesn't make a lot of sense.  It is more likely that the grape is named for St. Laurentius Day on August 10, which is approximately when the grapes go through veraison.  This is significant because it is between 10 and 12 days sooner than Pinot Noir goes through the same process, meaning that St. Laurent ripens sooner than Pinot Noir and is thus more suited to cooler regions with shorter growing seasons, like Germany and parts of Austria.

St. Laurent isn't grown in enormous quantities anywhere, but it has found a home in a few different places.  The vine covers about 600 hectares of land in Germany with the best examples coming from the Pfalz region. In Austria, which is perhaps St. Laurent's best known area of cultivation, the vine covers about 800 hectares of land.  Perhaps more importantly for Austria, though, is that St. Laurent is one of the parents of Zweigelt, Austria's signature red grape (the other parent is Blaufränkish).  Interestingly, St. Laurent is the most widely grown red grape in the Czech Republic, covering almost 10% of their total vineyard area (just over 1700 hectares in total).  There are smaller plantings in New Zealand and Canada as well.  The grape is finicky in the vineyard, as it buds very early making early spring frosts especially dangerous, and is susceptible to coulure (poor berry set) and rot (despite the grapes' thick skins, the bunches are very compact and moisture that gets into the bunch has a hard time getting back out, leading to rot). 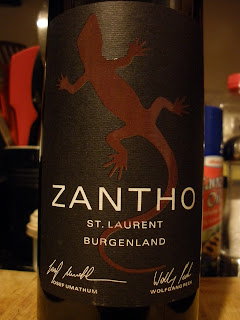 I was able to pick up a bottle of the 2008 Zantho St. Laurent from my friends at Curtis Liquors for about $15.  In the glass, the wine was a deep purple ruby color that was nearly opaque at the core with a narrow crimson rim.  The nose was nicely aromatic with savory, meaty aromas, sweaty leather, Asian spice and plummy fruit.  On the palate, the wine was on the fuller side of medium with fairly high acidity and low tannins.  There were earthy meat and wet leather flavors with black plum and stewed cherry fruit.  There were also notes of Asian spice and black pepper.  As the wine opens up, the meaty, savory aromas dissipate a bit and the fruit flavors step more into the forefront and the fruit character shifts to more towards the cherry end of the spectrum.  Therry Theise, in one of his wine catalogs, describes St. Laurent as "Pinot Noir with a 'sauvage' touch," and John Schriener writes that "it comes across as a Pinot Noir wearing hiking boots," both of which pretty much sum up my feeling on the wine as well.  I had actually written in my notes that the wine was like a brooding, meaty Pinot Noir but denser and darker.  For fans of gamier, meatier Pinot Noirs, St. Laurent is a can't miss, especially considering the price that most of them sell for.
Posted by Unknown at 1:39 PM

Thanks for such a well written informative essay. I have the opportunity to make some St. Laurent this year, from a Sonoma Carneros vineyard. Think I'll try it!--David Noyes/David Noyes Wines