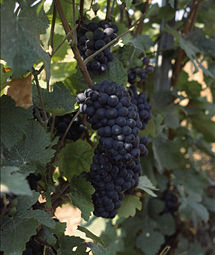 Today marks the 100th post on Fringe Wine!  When I started a little over a year ago, I had only three bottles in my cellar and I wondered whether I would be able to find enough unusual grapes to warrant having a site that was dedicated exclusively to them.  I now have over 100 unusual bottles in my cellar and about 20 tasting notes written up that should keep this site active for at least another 100 posts!

To celebrate, I generally like to open up some bubbly wine, but I don't currently have any tasting notes written on any celebratory bubbles, so I figured I'd do the next best thing.  Today's grape is Pinot Meunier, which is one of the three major grapes of the Champagne region in France.  What makes this wine unusual is that it is a still red wine made from Meunier grapes grown and vinified in Oregon. I visited Oregon wine country a few years ago to sample their Pinot Noir wines and left profoundly impressed.  I didn't run across any Pinot Meunier while I was out there, but as we will see, it makes sense that it's grown in the same kinds of regions that Pinot Noir thrives in.

You might guess just from looking at the name of the grape that it has some relation to Pinot Noir, and you'd be right.  Just what the relationship is is a little more complicated, though.  A study in 2000 concluded that Meunier was likely one of the parents of Pinot Noir, but more recent genetic testing has not only disproved that, but it has also found much more interesting stuff.  The dummy version that you'll find most places today is that Meunier is a mutation of Pinot Noir, and that's true, but it's not the whole story.  What Meunier actually is is a chimera, which in botanical terms means that the plant itself is made up of two genetically distinct kinds of tissue.  In most organisms, cells taken from any part of the organism will have identical DNA.  Cells taken from your nose will have the same DNA as cells taken from your heart or your blood cells.  In chimeras, one part of the organism is genetically distinct from the other parts, though all the parts still co-exist within a single organism.

The whole story is complicated, but essentially what's going on is this.  There are different layers of cells throughout the plant and what has happened with Meunier is that one of those layers is genetically different from the others.  In Meunier's case, this cell layer is responsible for the downy white appearance of its leaves which gives it its name (Meunier is derived from the French word for "miller," or baker, due to its resemblance to flour).  Sometimes this mutated cellular layer gets turned off or overridden by the other layers and you end up with leaves that have sections that have the white hairs and sections that don't sometimes on the same leaf!  Chimeras aren't incredibly rare in the plant kingdom, but they're not especially common either and Pinot Meunier is the only example of a chimera in the world of commercially grown grapes that I am aware of (though there certainly could be others).

The study mentioned above that discovered the chimerical nature of Meunier also stripped the cell layers out and propagated new plants from both the mutated layer and the non-mutated cells to see what would happen.  What they  found was that the normal cells ended up making a plant very similar to Pinot Noir while the mutated cells created a dwarf plant that had the characteristic downy white hairs on the leaves.  Neither plant, though, resembled Pinot Meunier itself, indicating that it was the interplay between the normal and the mutated cell layers that give the Meunier plant its characteristics.  Those interested in checking the article to see if my science holds up (keeping in mind that I'm not a professional botanist or geneticist) can look it up through this citation:

So now that we have the geekery out of the way, let's talk a little about Meunier.  As mentioned above, it is best known for its role in the production of sparkling wine in Champagne. Growers there like it because it buds later and ripens earlier than Pinot Noir, meaning it has a shorter growing season and attains ripeness more often than Pinot Noir (which is kind of a mixed blessing for sparkling wine production).  This ripeness, it is said, gives richness, body and weight to the final Champagne blend.  For many years, producers didn't want to admit the use of any Pinot Meunier (excepting Krug who proudly acknowledged its use) though that stigma seems to be slipping away.  It is thought that Meunier covers about 40% of the vineyard area in Champagne, making it the most widely grown grape there, though it is giving ground to modern plantings which emphasize Chardonnay and Pinot Noir over Meunier.

The grape is also grown in Germany where it is knowns as schwarzriesling (black riesling), Müllerrebe, and/or Müller-Traube.  It covers about 2,500 hectares of land in Germany and is gaining popularity.  Meunier also has a long history in Australia, where still wine production from the grape actually pre-dates Pinot Noir production.  Current plantings are scant, though, at a mere 150 hectares, mostly used in sparkling wine production.  There are also some plantings in the USA, again, mostly used for sparkling wine production.  I had an example from a winery on Long Island a few years back that was pretty unmemorable as well. 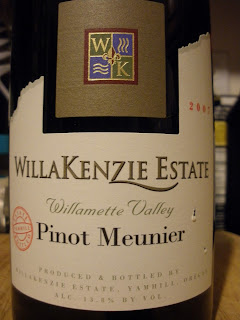 And then there's this bottle from the Willamette Valley in Oregon.  I was able to find a bottle of the 2007 Willakenzie Estate Pinot Meunier from a local shop for about $27.  In the glass, the wine was a medium crimson ruby color.  The nose was fairly aromatic with juicy strawberry, tea leaf, raspberry and forest floor characteristics.  On the palate, the wine was medium bodied with acidity on the higher side of medium and low tannins.  There were flavors of strawberry and raspberry fruit along with black tea, baking spice and a touch red cherry.  The alcohol seemed a little hot and slightly out of balance, but overall, it was a very nice wine. The overall impression from this wine is very similar to Pinot Noir and I would have liked to taste this side by side with a Pinot Noir from the same vintage and producer to see what the differences really are.  If I had this served to me at a blind tasting, I would peg it as Pinot Noir every single time and probably wouldn't hesitate about it.  If you are a fan of Pinot Noir, you should definitely give Meunier a shot, if you can track a bottle down.
Posted by Unknown at 12:28 PM