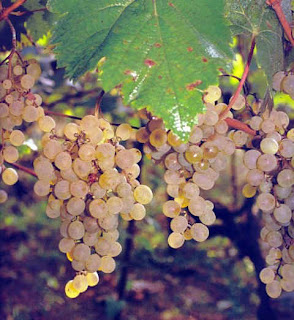 It's with something like a heavy heart that I bid a temporary farewell to the nation of Georgia and its wines. I still have a few Mukuzani wines in my cellar that I plan to drink, but today's post is likely the last one from this country for quite some time. I have exhausted the one shop where I have been able to find these wines, so, barring an unexpected discovery, this is likely it. Georgia was the first real discovery for me with this website and while they aren't exactly producing mind-blowing wines at the moment, I see a lot of potential there and will be keeping an eye out for future developments. It has been very enlightening and interesting for me to taste these wines and research the history of a region with such a great vinous legacy.

Today's wine is called Tvishi and it's made from the Tsolikauri grape. Tvishi is the name of a small village in the Rioni Gorge of the Lechkhumi province in north-central Georgia. The Rioni Gorge is formed by the Rioni river which is apparently a hot spot for white water rafters. The 1965 edition of Wines and Cognacs of Georgia describes Tvishi as "refreshing with a fruity flavour," and promises "one who has ever tasted this wine will never forget its delicate and gentle bouquet and inimitable harmonious taste." I'm still not sure what the numbering convention means in this book, but for what it's worth, Tvishi is listed as No. 19.

Tsolikauri is widely planted throughout Georgia, accounting for an estimated 90% of plantings in Western Georgia. It is used in the production of still dry and semi-sweet wines and is also used for distillation into spirits. According to Russian statesman Vyacheslav Molotov (of the Molotov-Ribbentrop pact, AKA the Nazi-Soviet non-aggression pact enacted in 1939), Tsolikauri was a favorite of Joseph Stalin, who was himself born in Gori, Georgia (which is located between Tvishi and the capital city of Georgia, Tbilisi). The bottling I was able to find was a Marani (Telavi Wine Cellars) from 2008 which set me back $16. Marani is actually a Georgian word that refers to the room where the large buried clay jars (called

kvevri) used in traditional Georgian wine making are located. Telavi Wine Cellars is a thoroughly modern operation (though their website seems to have not been updated since the 2003 vintage) that does not vinify their wines in the traditional way, and my guess is that this was vinified in stainless steel.

In the glass, this was a pale lemon color with hints of green. The nose was interesting with honeydew melon and white flower aromas. On the palate, the wine was medium bodied and semi-sweet with medium acidity. There were ripe flavors of apricot, honeysuckle and a bit of ruby-red grapefruit juice. It is really dominated by stone fruit and floral flavors, though, and there is just the faintest hint of citrus. This was much more balanced than some of the semi-sweet Rkatsiteli wines that I tried and is probably the most well-integrated white wine that I've had from Georgia. The sweetness was nicely counterbalanced by the acidity so that this never tasted cloying or treacly. Think fleshy off-dry Riesling with the acidity dialed back a bit and you'd be in the ballpark here. This could certainly work as a dessert wine, but it would also be nice with light, spicy foods as well.
Posted by Unknown at 11:37 AM