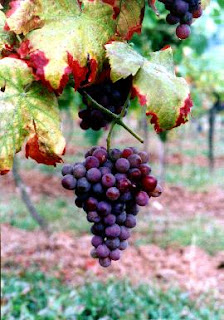 I'd like to start this post out with a public service announcement: if you have Google's safe search turned off, I do not recommend doing an image search for Schiava if you are at your place of employment or in any other public setting. You should probably make sure you search for "schiava grape" or "schiava wine" unless you want to get quite a surprise.

With that out of the way, we can now focus on today's wine. When we think about other countries, it's too easy to fall into the trap of thinking of whole countries as a single undifferentiated monoculture. With Italy, for example, it's easy to think that the whole country eats the same kinds of foods or even speaks the exact same language within its borders. For the US readers who aren't totally with me yet, think about how different the cultures of Georgia and Massachusetts are (a cultural divide that I've lived and experienced, being originally from Georgia and currently located in Massachusetts). One of the great things that has happened in writing this blog is that I've been able to look at smaller regions and see the differences in these regions compared to other regions within the same country. Some of the most interesting regions are those that are on a country's borderline, like Alsace in France. There is often an interesting mix of two cultures in these geographical regions that borrows some from each, but is individually distinct from both.

The Alto Adige region of Italy is one of these border territories. Located in the northeastern corner of Italy, Alto Adige constitutes the northern half of the Trentino-Alto Adige zone and is the most northerly section of Italy. It is a mountainous region (it is estimated that only about 15% of the land here is suitable for agriculture of any kind) that shares a border with Austria and Switzerland. Historically, the region was a part of Austria-Hungary and that empire's predecessors, but the region was annexed by Italy following World War I. The culture here is very Germanic and the region has two official languages: German and Italian. On wine labels, you are as likely to see "Alto Adige" as the region as you are to see its Germanic name, Südtirol, which means "South Tyrol," so named because the southern part of the Tyrol river flows through here.

Most production in this region today is focused on white wines, though at one point in time Schiava was by far the most widely grown grape in Alto Adige, accounting for 60% of the region's production, though that number has shrunk considerably in the more recent past. There are some other interesting native red grapes that can be difficult to find in the US. Lagrein and Teroldego are grown here and they will be the focus of a future post, but today's wines are made from Schiava, aka Trollinger, aka Vernatsch. Schiava has been grown in Alto Adige since the 15th Century and in Württemberg, Germany since the 17th Century. It is eaten as a table grape in Great Britain under the name Black Hamburg. It is a vigorous and hardy grape that must be aggressively pruned and managed in the vineyard to prevent out of control yields. The grape is thin-skinned and not particularly powerful in the first place so overcropping can have serious deleterious effects. The wines produced from Schiava are rarely imported into the US because even at their densest, they tend to be light in color and extract and resemble hearty rosés rather than the full bodied red wines that are currently in such fashion in here.

Schiava as a varietal is rarely printed on a wine label, but the first wine under consideration today is a varietally labeled 2009 Schiava Nera from the Vigneti delle Dolomiti IGT region. The producer was Gino Pedrotti and the wine was $20. In the glass, the wine was a very pale ruby color. It resembled a dense rosé more than a red wine (I'm certain I've had Argentinian Malbec Rosés that were denser than this). The nose was full of bright red strawberry and raspberry fruit. In the mouth, this was light bodied with good acidity, but a little hollow. There were some dusky raspberry and strawberry flavors, but the overall impression was that there was something missing in the midpalate. Stylistically, it was definitely right between a rich rosé and a very light Pinot Noir (like the Rhode Island Pinot tasted here previously). Overall, it was fairly nice and refreshing and is tremendously versatile with food, but there are many rosé wines that would I would rather have for much less money. 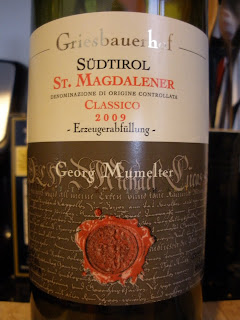 The second Schiava wine was from the St. Magdalener DOC (it is sometimes printed as Santa Maddalena...it really depends on whether your producer is more German or Italian leaning in their disposition). As you can see from the label at the left, if you just took a quick glance at this bottle, you would probably think you were about to have a German wine. This is another 2009 bottling from Georg Mumelter Griesbauerhof which cost $19. Once again, the color was a light ruby in the glass. The nose was full of red berries and the raspberry component was a bit more pronounced here. The wine was light bodied with good acid and no tannins. There were waxy red cherry and strawberry fruit flavors and a more pronounced dusky earthiness that came through on the finish tasting like bitter dried herbs. This wine was much denser and more complex and had fuller, riper fruit flavors. It definitely drank more like a light-bodied red wine rather than a meaty rosé. My biggest complaint here was that the alcohol tasted a little out of balance, giving this an almost cough-syrup kind of flavor. Still, it is a unique wine experience and one that certainly has its place at the table. It would pair with pretty much anything you would throw at a light-bodied Pinot Noir and do quite well with it I believe. The biggest sticking point with these wines is price, as it's tough to justify spending $20 a bottle for these wines. I'd be comfortable in the $12-$15 range with these all day long but am a little less enthusiastic at the $20 price point.

We recently found the St. Magdalener at Wine Sense in Andover, MA. Had been searching locally for a schiava-based wine. Popped the cork this past weekend and paired it sausage, roasted cherry tomatoes, and escarole. It worked well. The wine was not overly complex, but had nice fruit, making it suitable for a late summer meal.