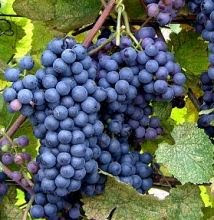 I can't prove this, but I would guess that wine drinkers (at least American ones) have a bias for grape names that sound like they originate from a Romance language. If you take a good look at the list of grapes that dominate the marketplace, nearly all of them have a French, Italian or Spanish name. Now, I'm not saying that it's purely a linguistic preference that has elevated Cabernet Sauvignon or Chardonnay to their esteemed positions. In fact, I think it's probably the opposite effect; since most of the big time wine grape names have a certain kind of sonic resemblance, then we are probably more likely to associate similar sounding words with quality wine than we are words that sound drastically different. Like Zweigelt, for instance.

In the pantheon of mellifluous grape names, Zweigelt sticks out a bit, but it could have been worse. It was created in 1922 by Fritz Zweigelt in Klosterneuberg, Austria, who originally named it Rotburger, which would be a very tough sell in the US. There is another red grape created in 1928 by crossing Trollinger (Schiava) and Riesling that goes by the name of Rotberger which is completely unrelated (interestingly, there is also Kerner, which is a white grape with the same parentage). My first thought was that perhaps Zweigelt came to be named after its creator in order to avoid confusion with the other grape, but it appears that Rotberger is hardly planted, and, in some places, the old Rotburger name is still used. My guess is that it was probably a marketing decision that somebody made to make the wine sound a little friendlier to non-German speaking consumers.

In any case, Zweigelt was created by crossing Blaufränkisch and St. Laurent. Austria, like its neighbor Germany, is predominantly a white wine producing nation and most of their focus is on Grüner Veltliner and Riesling (in fact, almost two-thirds of all wine production in Austria is white wine). Zweigelt is the most planted red grape in Austria, accounting for about 10% of the total vineyard area. It is not limited to a particular place, but seems to be grown all over Austria and even Canada is beginning to have some significant Zweigelt plantings. The grape has a late bud break, which allows it to tolerate colder climates a bit better since it can miss many of those early frosts that can decimate vineyards. It is also early ripening which further shortens the growing season, allowing the extremes at both ends of the growing season in many northern climates to be bypassed. 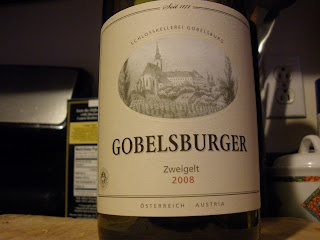 Zweigelt is relatively accessible in US markets. Many larger wine shops may have one or two different bottles kicking around in the German section. I was able to pick up a 2008 Gobelsburger Zweigelt for about $15. In the glass, the wine was a mulberry purple color with medium saturation. The nose had a little funky earth thing happening with raspberry and strawberry fruit and a wet leaf character. On the palate, the wine was medium bodied with fairly high acid and little tannins. There were racy tart cherry, tart plum, and wild strawberry flavors with a bit of clove and allspice hanging around. The funkiness in the nose doesn't really extend to the palate, which is a very good thing for me. Some people are very tolerant of or may even relish those funky, gamey notes in a wine but they are generally unwelcome for me. This wine is very similar to its parent Blaufränkisch and also shares some similarities with Pinot Noir as well. This is a very versatile food wine that could probably cover everything from salmon or tuna fish dishes up to roasted red meats. I would probably stop short of grilled meats with this wine and reach for something with a bit more stuffing to it.

I've recently been able to try a very interesting sparkling Zweigelt from Ewald Gruber called "Punkt Genau," which means "on the dot."  This line and winery is perhaps best known for its production of sparkling Gruner Veltliner (which will be featured on this site soon).  These are non-vintage bottlings and this particular wine ran me about $15 from Bauer Wine & Spirits.  In the glass, the wine was a very pale pink color with frothy bubbles.  The nose on this was very fruity with nice strawberry and candied red raspberry notes.  On the palate, the wine was very fruit-forward with strawberry and raspberry fruit and nice acidity.  The bottle says this wine is dry, but it tastes a little sweet, either because of the strong fruitiness or because there may just be a touch of residual sugar here.  I'm not sure how this wine was fermented, but it was probably done in the Charmat method or it was laced with CO2.  The style here is definitely more frizzante than fully sparkling and there's virtually no chance this is traditional method as it just doesn't have the yeasty, toasty secondary  fermentation aromas or flavors that you get in a traditional method sparkler.  The wine is actually under screwcap, which is a new one to me in a fizzy wine. It's a very clean, refreshing, friendly wine that would be great with brunch or just to unwind on a hot day.
Posted by Unknown at 10:16 AM

Ever since my friend Enrico (expert in ampelography) posted on fb a link to your blog I have become a fan of it: excellent idea concentrating on particular - "fringe" - wines and the reviews are just superb. So I was quite astonished to read here: "this wine is dry, but it tastes a little sweet, either because of the strong fruitiness or because there may just be a touch of residual sugar here." Sparkling wine labeled "dry" does contain always residual sugar, actually quite a lot, according to the Italian legislation between 17g/l and 32g/l. So one shouldn't be surprised that "dry" in sparking wine (any Champagne or Charmat, it's all the same when it comes to residual sugar). If you want to drink "dry" (in the sense of not containing any residual sugar) you have to opt for a bottle saying "brut nature" or "pas dosé" where actually only up to 3g/l residual sugar is allowed. Next levels are "extra brut" (residual sugar between 0 and 6g/l), "brut" (less than 12g/l), "extra dry" (between 12g/l and 17g/l) "dry"(between 17g/l and 32g/l, which is actually quite a lot of sugar), "medium-dry" or "demi-sec"(between 32g/l and 50g/l)and finally "doux" or "sweet" with more than 50g/l.
Have a look at the Italian site http://www.vinoinrete.it/sommelier/sommelier%20-1-%20vini%20speciali.htm

Thanks for your comment. I have a few responses.

1) This wine isn't Italian and I don't live in Italy, so the Italian regulations aren't much help here. Further, the word "dry" doesn't actually appear on the front label, but rather in the description on the back, which, as far as I know, isn't subject to any kind of regulation. That's all I was referring to when I said that "the bottle says the wine is dry."

2) I'm aware that most sparkling wine is bottled with some residual sugar, and, further, that a lot of table wines have a touch of residual sugar as well. In a lot of cases, this sugar falls under the human threshold for detection, meaning that wines with some sugar left over will still taste dry. Other factors in the wine, such as acidity level and alcohol level, can affect the perception of sweetness, with acid acting as a damper on acid perception and alcohol acting as an amplifier. Residual sugar is rarely the whole story with dryness because dryness is a perception and not an absolute category and when most wineries/marketers use the word dry, they don't mean 0% sugar, but rather that the wine doesn't _taste_ sweet.

The point I was trying to make is that the wine is _marketed_ as dry, not officially labeled as such, but my personal experience led me to think that there was more residual sugar than the winery was letting on. If they had indicated a dryness level on the front label, then we'd have a more precise idea of how much sugar there is in the final wine. Since the wine is only indicated as dry on the back, though, there's no telling what the sugar level actually is, and all I was trying to do was to say that I think there's a bit more there than the winery's description would lead you believe.

Thank you Rob for setting things right!
In particular I think your remark "dryness is a perception and not an absolute category" and "when most wineries/marketers use the word dry, they don't mean 0% sugar, but rather that the wine doesn't _taste_ sweet" can be regarded as some sort of landmarks in this respect.
Unfortunately my main point got somehow truncated due to some faulty copy and paste of mine, the whole sentence should read "dry in sparking wine (any Champagne or Charmat, it's all the same when it comes to residual sugar) doesn't actually mean "dry" - if dryness is conceived of no or very little sugar." The usage of the terminology in this regard, and I think I am not mistaken to believe that the scale from "extra brut" down to "semi-doux" is worldwide, reminds me a bit of calling a sausage "meat-sausage" when there is at least some 60% meat in it or, remaining here in Tuscany, calling any olive oil as long as it is bottled in the region of Tuscany "olio d'oliva toscano" even if the oil in actual fact has been imported from Greece.
Anyway I recall some real fruity Zweigelt last winter in Souyh Tyrol, from a small farm some 800m high above the Eisack valley (valle d'Isarco), the place is called "Foeranerhof" on the high-plateau of Ritten.