Today's wine is one that I knew absolutely nothing about prior to purchasing the bottle you see on the left. I was in a local wine shop, Brookline Fine Wine & Gourmet, which has an nice selection of Greek and Eastern European wines, looking for new things to try when I stumbled across this bottle. My familiarity with Georgian wine begins and ends with the trivial bit of information that the Rkatsiteli grape is native to that country and is grown voluminously there (Rkatsiteli is grown in limited quantities in the Northeastern US and will be the subject of a future post on this blog).

So I went ahead and bought the bottle. I've done some research since, and it turns out that Georgia is a pretty highly regarded wine country in Eastern Europe and their wines are considered the best of all the former Soviet Republics. They rank second in production for the region behind only Moldova (there's Moldova again!). Wine history in this region goes back to between 7000 and 5000 BC and there are nearly 500 native vinifera varietals! Of those, only 38 are grown commercially, and one of those grapes is saperavi.

Saperavi is a very unusual grape. It belongs to a group known as teinturier grapes which are unique because in addition to having red skins, they also have red pulps, and therefore red juice. Most red wine grapes have dark skins and clear pulps; the color in your red wine comes from the juice's contact with the skins during the fermentation process. The pulp of teinturier grapes contains the pigment anthocyanin (the same pigment that gives beets and red berries their color and which is also a powerful antioxidant) which gives it its unusual color. Few teinturier grapes are used as the primary grape in a bottle of wine, but saperavi is one of them. Saperavi originated in the Kakheti region of Georgia, but is planted widely throughout the country. This particular bottle is from Kakheti, a rare chance to taste a wine produced in a grape's natural home.

So what does Mukuzani mean? Well, Georgian wine is labeled much like French and Italian wine. What you see on the bottle is the name of the place where the wine comes from, and within those places, very particular kinds of wines are made. Mukuzani is an area in Kakheti where they are only allowed to make dry wines from 100% saperavi grapes. These wines tend to be made from grapes selected for their high quality and are watched over very carefully through the vinification process. The wine must be kept in oak for 3 years before release.

What does it taste like? I'll confess, when I first opened it, I had a sinking feeling. The cork popped and a very sour smell came out of the bottle. It's a smell that I've never been able to pin down, but it seems to hang around cheap, poorly produced bottles and tends to make the wine taste sour and out of balance. A first sniff in the glass and a first taste weren't very encouraging either. The smell and flavor were akin to canned, stewed tomatoes. In color, it was dark. Really dark. Opaque, inky black in the middle to a crimson rim. At the time, I was not aware that saperavi was a teinturier grape (I'll confess, I had never heard of teinurier grapes until about an hour ago when I was doing research for this post), so the deep, intense color was bit mystifying to me, given how hollow and sour the initial nose was. At first sip, the wine was definitely full bodied with soft, well-integrated tannins, but it just tasted a little off. I poured a full glass, finished making dinner, and then sat down with the wine one more time.

An amazing thing happened. The sour, tinny, stewed smell dissipated and in its wake was a dense, solid core of charcoal, pencil lead and dark dark dark cherries. Those flavors p 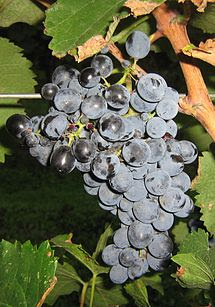 ersisted on the palate and added some notes of black licorice and a lingering kind of scorched taste, but not in a bad way. Scorched like how sometimes a pizza from a really hot brick oven gets some black spots on the crust and those little scorched bits add complexity and character to it. That's what these flavors were like. If I had to make a comparison, I would say that it reminds me of wines from the hotter parts of the Rhone Valley like Gigondas, or even of a Paulliac from Bordeaux with the pencil lead and dark black flavors.

The take home message here is that this wine is dark in every way you can think of. It is inky black in color with charcoal, smoky, ripe black fruits in the nose and palate. It is dense and layered. It is probably the Platonic Ideal of wine to serve with grilled meats, especially steak or sausage. If I have a gripe, it's that I think it could have stood to have a bit more tannic structure to hold some of that density up and the acidity could have used a little boost as well (I would rate it as low/med acidity), but on the whole, this was a huge shock and a very pleasant surprise to me. I think the producer of my bottle was JSC Corporation, but that's a guess. The picture above is the same bottle I had (mine was a 2005 vintage) and it only cost $13. This is a stellar wine at that price, and would probably improve with a few more years in the bottle.
Posted by Unknown at 3:09 PM