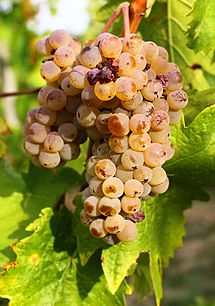 Welschriesling is a hard grape to get a handle on.  It goes by many different names in many different central European countries and though many of those names might lead you to believe it has certain relationships with other grapes, it actually doesn't.  Today I'd like to try and sift through what we do and don't know about this grape before getting to a few different wines I've recently tried from it.

The first thing one must do when dealing with this particular grape is to sort through the various synonyms it is planted under.  These synonyms fall into three broad categories:

1) The Welschriesling group.  This group consists of the names Welschriesling (as it is known in Austria, Canada, parts of Germany and Switzerland), Wälschriesling (Germany), Laški Rizling (Slovenia, Croatia and parts of Serbia), Rizling Vlašský (Slovakia), or Ryzlink Vlašský (Czech Republic).  In this group, Welsch, Wälsch, Laški and Vlašský all come from the same root word, but it isn't totally clear what that root word might be.  The most likely explanation is that they come from the German word welsch which means "foreigner," and that the name of the grape therefore means something like "foreign Riesling," meaning that it probably came into Germany or Austria from abroad.  Why and how the grape came to be identified with Riesling is unclear since Welschriesling bears no genetic, ampelographic or vinous relationship or similarity to Riesling.  It has also been suggested that the Welsch- prefix means "from Wallachia," which is a wine-making region in Romania.  This would be a possibility except for one thing...

3) In Croatia, the grape is known as Graševina, or sometimes Graševina Bijela.  I don't read or speak Croatian, but when I enter the word Graševina into Google translate, it is translated into the word "Riesling," which is really interesting (Bijela just means "white").  If Graševina translates as Riesling, then it would make sense for Germans to refer to it as "foreign Riesling" to differentiate it from their Riesling.  Furthermore, Graševina is the most widely planted grape in Croatia, with over 21,000 acres devoted to the grape as of 2009.  Wine Grapes concludes from all of this that Welschriesling likely originated from Croatia, and the evidence seems fairly convincing to me. 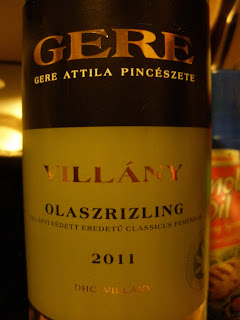 Welschriesling is made into a wide range of styles, but the two most common are dry table wines and late harvest/botrytized sweet wines.  I was able to try a variety of wines made from the grape from several different areas and in different styles. The first wine was the 2011 Gere Attila Pincészete Olaszrizling from the Villány region of Hungary (area 15 in red on this map).  I picked this wine up from my friends at Blue Danube Wine for around $13.  In the glass the wine was a fairly pale silvery lemon color.  The nose was fairly intense with aromas of apricot, pink grapefruit, pear and orange peel.  On the palate the wine was medium bodied with medium acidity.  There were flavors of lemon peel, lemon water and pear.  It was mild, delicate and subtle, but finished with a really strong, clean mineral note.  It was light and fresh and just the kind of thing that I would reach for on a screaming hot summer's day.  It's not going to blow your mind, but it does have its subtle charms. 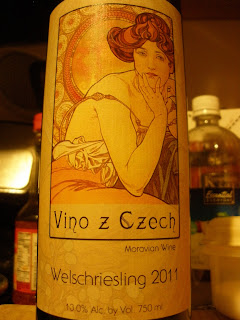 I have recently met the acquaintance the man and wife importing team at Vino z Czech, which is one of the few (and possibly only) importing companies in the US bringing wines from the Czech Republic here.  They sent me all of the white wines in their portfolio (as free samples, in the interest of full disclosure), and I will be writing about those wines, as well as writing more about their company and Czech wine in general, very soon.  Two of the wines they sent me, though, were made from Welschriesling grown in the region of Moravia in the southeastern part of the Czech Republic.  The first wine was the 2011 Spielberg Welschriesling, which can be purchased for around $20 a bottle here.  In the glass, the wine was a medium lemon gold color.  The nose was moderately intense with aromas of white pear, golden apple, chalk and a touch of white flowers.  On the palate the wine was on the lighter side of medium with fairly high acidity.  There were flavors of lemon, green apple, pear and a touch of lees.  It finished with a strong steely, chalky minerality.  Right out of the bottle, the wine was lean, sharp and bright, but as it opens up, the flavor profile shifts from the sharp lemon to more of the soft white fruits.  It stays light and crisp the whole time, though, and is very nice. 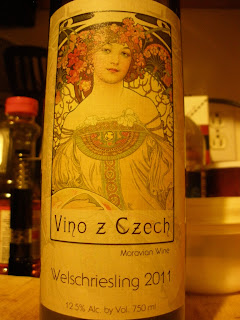 The second Vino z Czech Welschriesling was the 2011 Galant, also from Moravia, which retails for around $27 per bottle (about $24 with the case discount through their online retailer). You do have to really read the back labels with these wines since all of them look very similar to one another.  Vino z Czech is a kind of umbrella brand that these guys are using, but all of the wines that they put out are from individual producers.  Spielberg and Galant are two of the producers that they are working with, and the producer information is usually found on the foil cap and the back labels of these wines.  In the glass, this wine was a medium lemon gold color.  The nose was fairly intense with aromas of white pear, orange peel, pineapple, Meyer lemon and cantaloupe.  On the palate the wine was medium bodied with fairly high acidity.  It was dry with flavors of white pear, lemon water, golden apple and river stones.  Like the Hungarian wine above, this wine was subtle and delicate.  My tasting note calls it "a light, lean wine with quiet citrus and white fruit wrapped around a clean, subtle mineral core."  It wasn't as sharp and austere as its fellow countryman, but was still bright and zippy.  It is just a lovely little wine that's shy and a little flirty at the same time. 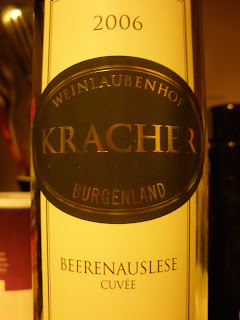 The final wine that I tried was the 2006 Kracher Beerenauslese from the Burgenland region of Austria.  This wine is made from 70% Welschriesling and 30% Chardonnay grapes that have been botrytized, and it cost about $25 for a half bottle (from my friends at the Spirited Gourmet). In the glasss the wine was a medium bronze gold color.  The nose was intensely aromatic with beautiful aromas of honey, orange marmalade, pineapple, grapefruit, and mango.  On the palate the wine was on the fuller side of medium with fairly high acidity.  It was very sweet with flavors of honey, candied pineapple, grapefruit curd, and orange marmalade.  It had a curious bitter citrus pith kind of finish that was a bit unpleasant and unwelcome.  It's a very good wine, but it really wasn't anything exceptionally exciting, though it is a decent value.  Welschriesling isn't much of a blockbuster grape and I found that I enjoyed its subtle delicacy more in dry table wine form than in this more concentrated style.  It felt a little bit like if the cute librarian you had a crush on showed up one day in a leather mini skirt and a tube top.  She's still a lovely woman, but she doesn't strike your fancy in quite the same way.
Posted by Unknown at 3:42 PM