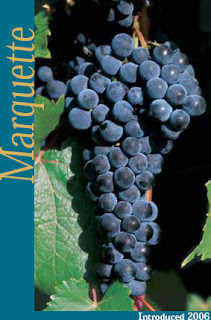 *The story below first ran in the Midwest Wine Press about two weeks ago.  I have added a review of a wine that I was able to try from the grape, but the bulk of the article has remained unchanged, with only a few additions and minor edits.  Mark runs a great site over at MWP and I'd encourage everyone to go check it out*

For the most part, the wines that you drink today are made from the same grapes as the wines your grandparents and great-grandparents drank. The great wine grapes of the world have been around for several hundred years, and some of them for much longer than that. For example, the Georgian grape Rkatsiteli is thought by some authorities to date back to 3000 BC, while the Greek grape Limnio was reputedly mentioned by Aristotle and Hesiod in ancient Greece. Those are extreme examples, but even Chardonnay can be traced back to the 16th Century while Cabernet Sauvignon was first mentioned in the late 18th Century.

And then you have a grape like Marquette. Marquette (named for 17th Century Jesuit missionary/explorer Père Marquette) has only been available to the public since 2006, though the original cross responsible for creating it happened in 1989. It was created by Peter Hemstad and James Luby at the University of Minnesota, which has become one of the foremost cold-hardy grape breeding facilities in the United States. Marquette is a complex hybrid grape, which just means that it has more than two different grape species in its lineage. A simple hybrid would be the result of a crossing between two grapes that were of different species and which had no other species in its parentage. A pure Vitis vinifera crossed with a pure Vitis labrusca would produce a simple hybrid. If we crossed this simple hybrid with a pure Vitis aesitvalis, the resulting offspring would have three different species of grapes in its lineage and it would be a complex hybrid. Marquette actually has eight different Vitis species in its lineage. In addition to Vitis vinifera, there is also Vitis riparia, labrusca, aestivalis, lincecumii, rupestris, cinera, andberlandieri, all of which are different North American species of grapevine.

The pedigree map below is not complete, but it does show some interesting relationships in Marquette’s close family tree. Marquette is the result of crossing MN 1094 with Ravat 262, neither of which are commercially important in their own right, but we can see that Ravat 262 is a direct offspring of Pinot Noir, making Marquette a grandchild of Pinot. On the other side of the tree, we can see a few commercial hybrids (Landot Noir, for example) and another vinifera variety, Schiava Grossa, as Marquette’s great-great-great grandparent. It was also pointed out in the MWP comments section that if you trace MN 1019's pedigree a little farther back, you'll find Cabernet Sauvignon and Merlot in there as well.  Marquette is also a cousin of Frontenac, another University of Minnesota cold-climate creation, though I’m not exactly sure where Frontenac would fit in on the pedigree chart. 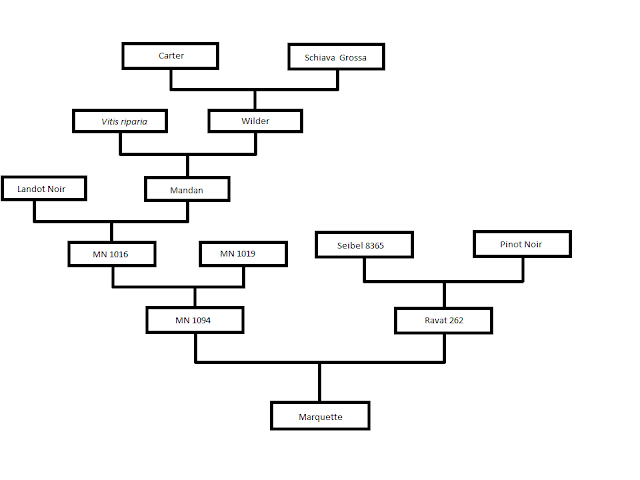 Though Marquette is a very young grape, it is proving popular with growers in cold climate states. Minnesota leads the way with just over 200 acres planted (as of 2007, but this figure is almost certainly higher today), but there were also about 10 acres planted in Indiana as of 2010 and 6 acres in Iowa as of 2006. It is prized in these areas because it is extremely cold hardy, regularly tolerating temperatures between -20º and -30º Fahrenheit (and at least one report of a vine surviving -36º conditions with no injury). It does bud early, which can be a problem in frost-prone areas, but secondary buds can also be fairly productive. It has good resistance to downy mildew, powdery mildew, and black rot and ripens around mid-September in central Minnesota. The grape is typically made into a dry table wine that is characterized by black fruit and earthy notes with some “typical hybrid” aromas and flavors as well. The grape can suffer from high acidity when picked, but malolactic fermentation and barrel ageing can help to keep this in check in the finished wine.

One of the interesting “side effects” of Marquette’s being such a young grape is that the University of Minnesota actually has a patent on it, and those interested in growing the vine must buy their planting materials from a nursery licensed to sell them by the University. Furthermore, individuals are not permitted to asexually propagate their vines without a license from the University. Think of it like a modern best-selling novel. You can buy the book from a bookstore or borrow it from a library, but you can’t make copies of it and sell them to your friends. Chardonnay, on the other hand, is public domain, and while you can go down to the bookstore and buy a copy of it, there are other free(and legal) ways to get your hands on (and share) the materials as well. Whether Marquette will stick around long enough to become a “world classic” like Chardonnay or Cabernet Sauvignon is something that only time will tell. 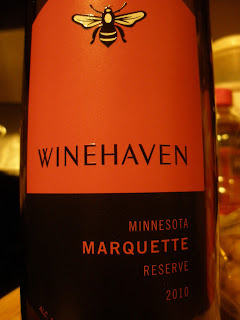 I was able to pick up a bottle of the 2010 Winehaven Marquette Reserve from their website for about $25 (they don't ship to Massachusetts, but they were able to ship to my brother in another state).  Winehaven is located in Minnesota, about 35 miles north of Minneapolis.  I picked up a few wines from them that I hope to write about in the next few weeks.  In the glass the wine was a fairly deep purple-ruby color.  The nose was fairly intense with aromas of crushed wild berries, red cherry, raspberry, black plum, redcurrant and semi-sweet chocolate.  On the palate the wine was on the fuller side of medium with medium acidity and very low, soft tannins.  There were flavors of smoky black plum, baking chocolate, black cherry and black pepper.  The wine clocks in at 13.9% alcohol, but wears it kind of clumsily and comes across a little hot and off-balance.  There was something vaguely and distantly foxy on the nose and the palate, but it's not a foxy wine, if that makes any sense.  Overall, it's a fairly nice wine, especially considering the challenges of ripening grapes in the unforgiving climate of Minnesota.
Posted by Unknown at 6:48 PM

This wine Marquette is originally from Minnesota, USA. Now i know what to serve at my dinner party.