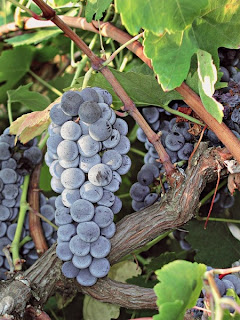 A few months ago, I was invited to a trade tasting of Greek wines.  The wines were from the portfolio of Athenee Importers, while the tasting itself was hosted at the offices of Winebow in Somerville.  I don't get a lot of invites to trade tastings and I don't end up going to most of the few that I'm actually invited to.  I have a day job that generally conflicts with the timing of these things, and, furthermore, it's hard for me to find a tasting that I think might have stuff I can use for this site.  On top of that, I don't really believe in reviewing wines that I've only tasted in a walkaround wine tasting environment.  I think that large-scale tastings are important, but are really only useful for helping me to identify wines that I'd like to spend a bit more time with.  The average person doesn't drink 50 different wines in a night and so I feel like whatever conclusions I draw from tasting in that particular environment are limited.  I like to drink wines that I review at home with food in order to really give them a chance to show their stuff.

It can be difficult to get full bottles to take home from trade tastings, though, so as I said above, I don't usually go to very many of them.  This particular tasting and the organizers behind it (Stephanie Teuwen and her team at Teuwen Communications) did a really great job of helping me get my hands on some sample bottles of really interesting wine that I was able to try there.  The room was full of great producers and really cool wines, but I picked out about a half dozen bottles that really intrigued me and Winebow was generous enough to get me some samples.  Today I'd like to take a look at just one of the cool grapes that I sampled at that tasting, but I'll be covering the other bottles in a future Odds and Ends post.

The grape I'd like to take a look at today is called Avgoustiatis.  Avgoustiatis takes its name from the Greek word for the month of August, Αύγουστος (which I think is pronounced like "avgustos"), because that's the month that the grapes get ripe.  It is found primarily on the western coast of the Peloponnesos and on an island called Zakynthos (which is part of the Ionian islands, where Avgoustiatis is the second most widely planted red grape) just offshore, but Wine Grapes, for unstated reasons, claims that it is likely from the Cyclades Islands originally, which are southwest of the Peloponnesos and just north of Crete.  Wine Grapes also claims that there is a possible parent/offspring relationship between Avgoustiatis and Mavrodaphne and cites as their source the Master's thesis of Mihalis Boutaris, published in 2000.  Boutaris's thesis is not available publicly, but he was kind enough to send me a copy of it a few months ago, and when I checked his research, his findings actually showed that Avgoustiatis and Mavrodaphne were genetically identical at the 8 microsatellite loci he examined.

Avgoustiatis and Mavrodaphne are considered separate cultivars by pretty much everybody, so I emailed Mihalis about his curious finding.  He assured me that the two cultivars are distinct and can be discriminated ampelographically and physiologically and having tasted wines made from each of these grapes, I'm inclined to believe him, since they are very different from one another.  It is curious, though, because his paper actually had six total samples, four of Mavrodaphne, one of Avgoustiatis and one of something called Agustiatico, which he says is a clone of Mavrodaphne.  The sample of Avgoustiatis came from Mercouri Estate, whose wines I'll actually be looking at below.  The samples of Mavrodaphne and of Agustiatico all came from university and national germplasm collections, except for one, which came from Mercouri as well.  The mostly likely explanations are either Mercouri sent a mislabeled sample, or a labeling error occurred at some point during the experiment.  Unfortunately, I haven't been able to find any other studies with genetic information on Avgoustiatis, so it doesn't look like we have the scientific information available to draw any firm conclusions.* 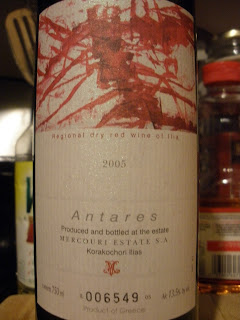 I was able to try two different wines made from the Avgoustiatis grape, one of which I purchased locally and one of which was a sample from the show I attended.  The first was the 2005 "Antares" from Mercouri Estate, which is a blend of (I think) about 80% Avgoustiatis and 20% Mourvedre that is aged for about a year in oak.  I picked it up for about $30 from my friends at the Spirited Gourmet.  In the glass the wine was a fairly deep brickish red color.  The nose was fairly intense with aromas of black cherry, plum, sweaty leather, smoke and animal funk.  On the palate the wine was full bodied with medium acidity and medium, chunky tannins.  There were flavors of smoke, graphite, leather, black cherry, cedar wood, espresso and meat.  It was dark and savory with a lot of earthy, funky animal notes to it.  These are a major hallmark of the Mourvedre grape, and I found myself wondering how much of the finished wine's character was due to Mourvedre and how much was coming from Avgoustiatis. 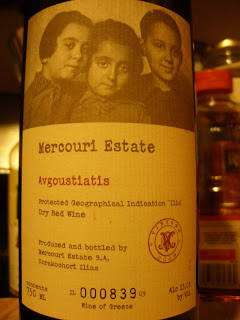 Fortunately, I was able to get my hands on a bottle of the 2009 Mercouri Estate Avgoustiatis, which is 100% Avgoustiatis.  This wine was provided to me as a sample, so I'm not sure exactly what the retail price on it is.  They only make about 2,000 bottles of it per year, though, so it may be hard to lay hands on.  In the glass this wine was a fairly deep brickish ruby color.  The nose was moderately intense with aromas of smoke, black cherry, and blackberry with a little meatiness and a little sweatiness to it as well.  On the palate the wine was full bodied with fairly high acidity and medium tight, grippy tannins.  There were flavors of black cherry, blackberry, spicy plum, smoke and charred meat.  There was a little bit of animal funk to it, but it was really dominated by smoke and plummy fruit.  Having tasted this wine, I understood why the winemaker would think that Avgoustiatis would play well with Mourvedre.  They have a lot of similarities, but Mourvedre seems to be a little earthier and funkier while Avgoustiatis is a little fruitier and smokier.  Both wines were very good, though, and would be outstanding with grilled red meats (especially lamb).

*I'm not really interested in getting into all this again, but I do want to mention to first time visitors that this is one of the biggest problems I have with Wine Grapes (read all about it here).  Much of the information is good, but a lot of findings are misreported or mis-cited by the authors, and I find that when I do my due diligence and follow up on some of the citations, the original paper isn't saying anything like what the authors of Wine Grapes are reporting.  If one were simply reading Boutaris's thesis, the conclusion one would come to about Avgoustiatis and Mavrodaphne is not that they had a parent-offspring relationship, but rather that they were actually the same grape.  I'm not sure how they got to the conclusion they got to given the actual information at hand, but it's turning out to be a recurring problem with the book.
Posted by Unknown at 3:13 PM

sonoma private wine tours said...
This comment has been removed by a blog administrator.
September 4, 2013 at 7:45 PM