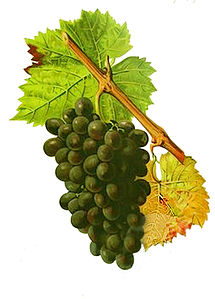 One of my favorite kinds of Fringe Wines are those made from grapes that are somewhat common in certain blended wines, but which are rarely found playing the star role.  As I mentioned in my post on Susumaniello, blending grapes usually get their reputation by having one or two very nice qualities, but by also being somewhat deficient in several other areas.  A grape may have a nice aroma and good color, but may be low in acid or excessively high in tannins so if you can find another grape with good acid and a soft body but which lacks perfume and is lightly colored, the two of them together can create a well-balanced wine.  Though I generally focus on varietal wines for this blog, that's mostly a decision made on the nature of the content that I write about and not a personal preference.  I enjoy varietal wines, but some of my favorite wines in the world are blends, and I try to represent that section of the wine world, when I can, in my erratic Weird Blend Wednesday feature.  Since the focus of this site has really shifted more to individual grape varieties, though, it stands to reason that the majority of my posts deal with varietal wines.

All of which kind of takes me away from what I really wanted to talk about today, which was varietal wines made from traditional blending grapes.  Sometimes blending grapes really are useful only for the handful of attributes that they can contribute to a blend, but sometimes they just need a little change of scenery in order to show their true colors.  Carmenere, for instance, was a very minor component in Bordeaux blends for many years, but when the grape was exported to Chile and growers figured out how to work with it there, it became a star grape in its new home.  Malbec has a similar story, though it was a star player in a little area called Cahors before hitting it big in Argentina.  Even Cabernet Sauvignon and Merlot, the two king red grapes of the New World, were originally blending components of the great wines of Bordeaux, though they certainly played a more prominent role in those wines than Carmenere or Malbec ever did.

Which brings us to today's grape, which is one that a lot of people may have had at some point or another, but very few have had in a starring role.  It is known in Tuscany as Mammolo and it was once a crucial part of the Chianti blend.  It has been known in Tuscany since the early 17th Century under a variety of names, all of which relate in some form or another to the many different morphological characteristics of the many clones that are out there.  There's Mammolo Piccolo, Mammolo Grosso, Mammolo Asciuto and Mammolo Tonda, among many others.  The Mammolo part of the name is thought to come from the Italian name for violets, Viola mammola, because of the perfumed quality that the grapes can impart to a finished wine.  It was once widely planted throughout Tuscany, but its numbers have been on the decline and as of the 2000 agricultural census, there were less than 150 hectares (360 acres) under vine in all of Italy.

Off the western coast of Italy is the island of Corsica which technically belongs to France, but which is closer geographically and culturally to Italy.  We paid a brief visit to Corsica a few months back to take a look at a blended wine made mostly from a grape they call Nieullccio, but which happens to be none other than Sangiovese.  That particular wine also had a dollop of something called Sciacarello in it, which recent DNA testing (citation 1) has shown to be none other than the Mammolo of Tuscany (there is another Corsican grape called Malvasia Montanaccio which is also identical to Sciacarello and Mammolo, but that name is far less common than the others).  Like Sangiovese, it is thought that Sciacarello was brought to Corsica from the Italian mainland, and the fact that it has parent-offspring relationships with several other Tuscan grapes (none of which are widely known today) seems to back this theory up.  The name Sciacarello means "crunchy," but I'm not really sure how that adjective fits in with the grape itself.  Sciacarello is currently grown on just under 800 hectares of land (just under 2,000 acres) throughout the island of Corsica, though much of it, including both wines I'll be taking a look at today, is around the area of Ajaccio on the western part of the island. 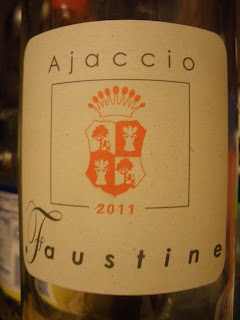 I was able to find two Corsican wines from the same producer, but in two very different styles.  The first was the 2011 rosé from the Domaine Comte Abbatucci, which is 100% Sciacarellu (the local spelling of the grape's name), and which I picked up for around $30 from my friends at the Wine Bottega.  In the glass the wine was a very pale salmon-pink color.  The nose was fairly intense and very leesy with aromas of cheese and strawberry and little else.  On the palate the wine was medium bodied with fairly high acidity.  The pronounced leesy, cheesy character followed through on the palate and was joined by some tart strawberry and cherry fruits with a bit of a stony mineral finish.  The fruits were strangled at room temperature, but as the wine approached cellar temp, they began to open up a little bit and the strong aroma and flavor of cheese began to fade into the background.  It's a well structured, but somewhat austere wine that I had a hard time falling in love with.  At $30 a bottle, it's probably not something I'll be reaching for on a regular basis. 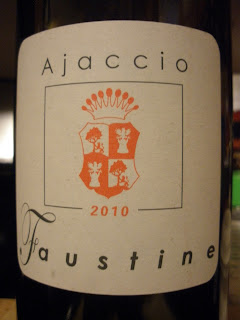 The other wine that I was able to try was the 2010 Domaine Comte Abbatucci red wine, which is 70% Sciacarellu and 30% Nieulluccio, and which I picked up for around $37 from Marty's in Newton.  In the glass the wine was a fairly light purple ruby color.  The nose was moderately intense with aromas of wild, brambly red fruit like red cherry and raspberry along with some dried leaves, underbrush and leather.  I thought I may have picked up a hint of violet, but it could have been my imagination running away with me.  On the palate the wine was medium bodied with fairly high acidity.  There were flavors of red cherry, raspberry, sour plum, dusty leather, cigar tobacco and damp tea leaves.  The wine reminded me more of Pinot Noir than Chianti and while I found it enjoyable enough, I thought that the nearly $40 price tag was a bit too steep for what you get here.  If this wine's price were slashed in half, then I think you might be a bit closer, but it's always very difficult to assign an exact price to a wine's experience.  If money is no object, then this is a very lovely bottle from a grape that is becoming increasingly harder to find in a starring role.