Hello everyone and welcome once again to my erratic Odds and Ends feature, where I take a look at a few wines I've tried recently that I feel either don't warrant a full post or which feature grapes that I've already written a full post about.  I've got a handful of interesting wines here that I hope you'll enjoy reading about, so without further ado, let's get to them! 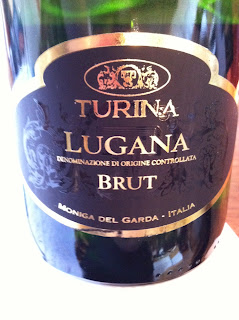 I've written several times (as in my posts on Groppello, Vespaiola, Grechetto and Sagrantino) about the wines of Paul Turina, an Italian importer from Maine who is a friend of mine.  Paul has some distant relatives who make wine in the area around Lake Garda in Italy and I've written about some of their offerings in the post on Groppello linked above.  His family also works with the Turbiana grape, which, as we discovered in my post on that grape last year, is actually Verdicchio.  I've tried a sparkling Verdicchio from the Marche, but I've never tried a sparkling Turbiana from Lugana so when Paul gave me the opportunity to taste his family's wine, I graciously took him up on it.  In the glass the wine was a fairly pale lemon gold color with steady bubbles.  The nose was somewhat reserved with aromas of apple and pineapple and little else.  On the palate the wine was on the lighter side of medium with fairly high acidity and a loose bubble structure.  There were flavors of ripe apple, pear, baked white fruits, candied apple and pineapple.  This is a tank fermented wine that has more complexity and depth than your average prosecco.  It's really a lovely little bottle and those interested in trying it are advised to contact Paul via his website. 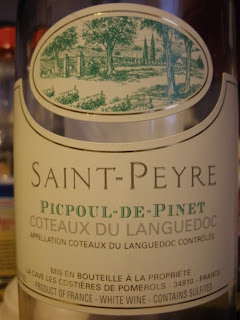 Next up is a wine made from one of the very first grapes that I wrote about, Picpoul Blanc.  Even though that post was only the tenth one that I had written, I really don't have any new information to add to it.  Picpoul is a pretty straightforward grape without any real controversies or interesting family connections.  I'm still a big fan of it, though, and this bottle, the 2010 vintage from the Saint-Peyre winery in the Coteaux du Languedoc region of France, was given to me as a gift by my wife (retail is around $11).  In the glass the wine was a fairly light silvery lemon color.  The nose was fairly intense with aromas of grapefruit, grapefruit peel, pear and some grassy herbs.  On the palate the wine was medium bodied with fairly high acidity.  There were flavors of pear, grapefruit peel, golden apple, lemon and cut grass.  Picpoul always reminds me a bit of Sauvignon Blanc, and this wine was certainly no exception.  It's bright and zippy with a wonderful wild, grassy vein running through it as well. 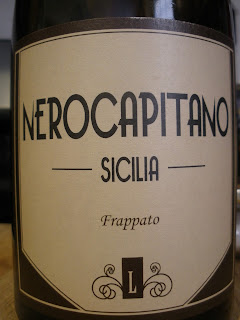 I've mentioned one of my favorite shops, The Wine Bottega in the North End of Boston, over and over again because they always have an interesting selection and are always incredibly nice and knowledgeable about their merchandise.  Matt is one of the co-owners of the shop and he has recently started his own importing label on the side called Selectio Naturel.  Like the Bottega, Selectio Naturel is focused on representing small producers making natural wines.  One of those producers is Lamoresca whose vineyards are located deep in the hills of central Sicily at an altitude around 430 meters above sea level.  Their approach in the vineyard and in the winery is minimalistic, and you can read more about it here.  Matt imports their Rosso, which is a blend of Nero d'Avola and Frappato, their Bianco, a blend of Vermentino Corse and Roussanne which I'll have a full review of shortly, and the Nerocapitano, which is 100% Frappato.  Frappato is absolutely one of my favorite grapes and in my prior post on it, I got a little carried away with an example from Occhipinti, so I had high hopes for this bottle, the 2011 vintage, which I picked up at the Bottega for around $30.  In the glass this wine was a fairly light pinkish ruby color.  The nose was intense with aromas of red cherry, wild strawberry, raspberry and rose petals.  On the palate the wine was medium bodied with fairly high acidity.  There were flavors of bright red cherry, raspberry, rose water and wild strawberry.  While it wasn't as intoxicating as the wine from Occhipinti, it was still gorgeous with a beautiful perfume and pure fruit flavors on the palate (and it costs about $20 less per bottle). 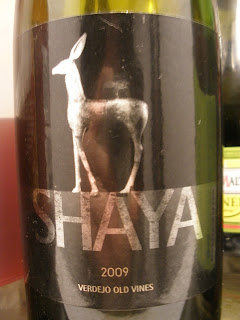 Another one of my very early posts was on the Verdejo grape from Spain.  In that post, I wrote that Verdejo was best known in Rueda, Spain, but the bottle that I was able to try was from La Mancha, which is a little further south, a little further inland, and a bit hotter and drier than Rueda.  I enjoyed the bottle that I had picked up, but I was curious to try a more representative sample from an area where the grape was more traditional and more highly regarded.  I found the 2009 Shaya Verdejo ($17) a few months after I wrote my initial post and have had the tasting note kicking around in a notebook for quite some time now.  In the glass the wine was a pale silvery lemon color.  The nose was moderately intense with aromas of pear, white peach and fresh cut lemon.  On the palate the wine was medium bodied with medium acidity.  There were flavors of pear, lemon peel, and lees with a stony, chalky minerality on the finish.  It was an OK wine, but I didn't like it as much as the example from La Mancha, which was actually a little bit cheaper than this bottle. 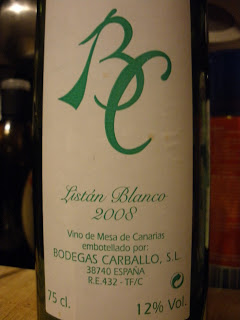 A few months ago, I was shopping at another one of my favorite local stores, the Spirited Gourmet in Belmont, and came across a bottle of wine made from the Listán Blanco grape (the 2008 Bodegas Carballo, which cost around $24). I had recently picked up a few bottles made from Listán Negro and was excited to find something that I didn't think I had tried before. I bought the bottle without asking anyone about it or bothering to look it up on my phone and so was somewhat disappointed when I looked it up at home and discovered that Listán Blanco is actually just another name for Palomino, which I've already written about.  This wine was from the Canary Islands, though, and was made with some skin contact, so I was curious to see what it was like.  In the glass the wine was a fairly deep lemon gold color just starting to go bronze.  The nose was intense with aromas of red apples, apple cider, fresh cracked pecans, seawater and autumn spice.  On the palate the wine was medium bodied with medium acidity.  There were flavors of baked apple, apple cider, fresh cracked pecans, toasted walnuts, autumn spice and dried leaves.  When I used to jump into raked leaf piles as a kid, I remember there being a particular smell and taste that would result from the leaves being crushed by our bodies.  A fine powder would form and coat the inside of our noses, our mouths and our clothes and that powder had a very distinct kind of taste and smell that I had essentially forgotten about until I drank this wine.  Everything about this bottle screams autumn and I almost felt like the wine had a kind of mulled character to it.  This was miles better than the Palomino I tried previously and it gives a hint as to what Palomino may be capable of in careful hands.
Posted by Unknown at 4:09 PM

Hi Rob - a few years ago Picpoul was definitely Fringe; these days, here in the UK at least, it's on the cusp of becoming the Next Big Thing after the ubiquitous Pinot Grigio.

It's the sort of simple, pleasant wine one buys on holiday in the south of France for a couple of euros.

Or a picnic wine: http://cambridgewineblogger.blogspot.co.uk/2011/06/six-summer-picnic-wines-from-naked.html

I was going to say what Tom did :)

While Picpoul has become a bit more common here in the US since I wrote my first post on it a few years ago, it still isn't nearly as ubiquitous as something like Pinot Grigio. Many major wine shops will probably have one or two bottles of Picpoul in stock, but most small shops still don't carry wines made from the grape. Since I'm only familiar with my local wine selection, that's what I have to use in trying to decide what may or may not qualify as unusual, but it is interesting to hear what the markets are like in other places in the US and in the world.

I look forward to hearing your thoughts on the Lamoresca Bianco!