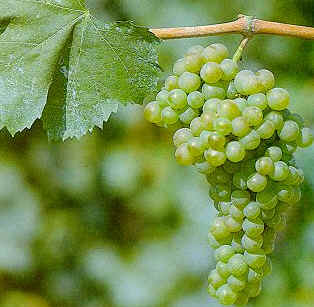 It isn't often the case that I end up more confused after researching a grape than I was when I started, but that's almost what has happened in researching today's grape, Turbiana. The confusion that I had to sort through in order to figure out just what Turbiana actually is has steeled my resolve to provide citations in any blog post where I refer to published results.  In the past, I've tried to provide links whenever the articles are freely available online, and when they aren't, I've tried to either provide a citation or give enough information so that an interested reader can pursue the article themselves, but from now on, any research that I consult, I will be sure to cite.

It all started today when Nick over at the Spirited Gourmet sent me an email letting me know he had just gotten a wine made from the Turbiana grape in his shop.  By chance, I had recently had a different wine made from the Turbiana grape and was working my way through my notes to post about it.  Nick's email spurred me on, so I started to do some digging.  The Oxford Companion to Wine had no listing for Turbiana, but, in the entry on Lugana, did mention that Trebbiano di Lugana, the former name for Turbiana, was the same as Trebbiano di Soave, which is similar to Verdicchio.  When you search for Turbiana in Wikipedia, it automatically redirects you to the entry on Verdicchio.  The VIVC takes you directly to the entry on Verdicchio when you search for Turbiana as well.  Once you get past those three frontline sources, though, all hell starts to break loose.

What nearly all of the sites (except for the winery's) are trying to get at is that Turbiana is an independent grape variety that sciences has recently freed from the Trebbiano family.  Nearly every site linked above refers vaguely to "research" but none of them give a direct citation. I've noticed that The Oxford Companion to Wine does this constantly, which drives me a little bit crazy.  When I see a reference to "DNA research" and I know the person making the reference isn't a scientist or geneticist themselves, I always like to try to find the paper myself to be sure that the paper is actually saying the things that the writer is attributing to it.  It took a few hours of really creative googling, but I believe that the paper that is being referred to is actually this one from 2001.  In that paper, the researchers perform microsatellite analysis on 7 different Trebbiano subvarieties and 17 other grape varieties that look similar to Trebbiano.  What they found was that there was a lot of genetic diversity among the samples that they tested, but the samples that were the most similar were Trebbiano di Soave and Verdicchio (which, it turns out, are the same grape [additional source]) and Trebbiano di Soave and Trebbiano di Lugana.  The researchers are clear that Trebbiano di Soave and Verdicchio are synonyms, but it is a little less clear what the relationship is between Trebbiano di Soave and Trebbiano di Lugana.  The two grapes were 97% similar in the sections of their genetic code that the scientists tested for, but the only conclusions that the researchers draw is that the grapes are "genetically similar."

The more interesting thing that the study found is that the various members of the Trebbiano family are genetically dissimilar enough from one another for the researchers to conclude that they probably do not share a common ancestor.  Which not only means that they are all different grapes, but, further, that they probably aren't even related to one another!  The experiment examined Trebbiano Toscano, Trebbiano d'Abruzzo, Trebbiano Spoletino, Trebbiano di Spagna and Trebiano Romagnolo in addition to Trebbiano di Soave and Trebiano di Lugana and found that only the latter two were similar enough to be considered related.  So even though all of the grapes above are considered under the same banner of "Trebbiano," and, though they certainly have many of the same kinds of physical characteristics, genetically speaking, they're as different as they can be.

At this point, it's reasonable to ask why they all have the same name if they aren't related to one another.  Most theories about the origin of the name Trebbiano posit some geographical origin like the name of an ancient town in Tuscany or the Trebbia river in  Liguria.  That kind of origin story makes sense only if all of the grapes known as Trebbiano are the same grape or if they all can be traced back to a common ancestor located in that geographical area.  Since we know that isn't the case, the researchers conclude that the name probably comes from the word "draibio" which means "vigorous shoot" in Frankonian.  I don't know about the details (it has something to do with Charlemagne, I think) since the paper that they cite for that theory is in German, but the crux of the matter is that name Trebbiano comes from a description of how the vine grows rather than a location, which would explain the genetic diversity of the multitude of grapes with that name. 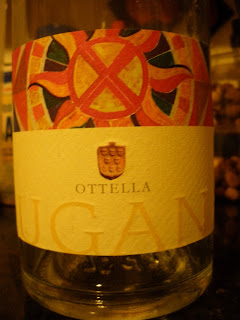 I was able to find a bottle of the 2009 Ottella "Lugana," which is grown near Lake Garda in the Veneto region of Italy.  In the glass the wine had a medium silvery lemon color.  The nose was nicely aromatic with lemony citrus, white peach and a kind of clean, stony river water sort of smell.  On the palate the wine was medium bodied with medium acidity.  There were flavors of white peach and lemon peel with that same stony kind of minerality on the finish.  It was a little flat and could have used a bit more acidity.  The nose was more enjoyable than the palate was, but it was still and pretty good wine for around $15.  It wasn't all that complex or deep, but it was crisp and refreshing and sometimes that's just the sort of thing you need.  I prefer Verdicchio from the Marche, but this is an interesting wine with a really crazy story you can tell to your friends while drinking it.  Or you can just enjoy it.

I've also reviewed a sparkling Turbiana in this post.
Posted by Unknown at 4:47 PM

Allow me to congratulate you with making such an interesting and useful review.

Fascinating, and quite useful as I will be leading a tasting this saturday featuing a trebbiano di laguna / Verdecchio / Trebbiano di Suave / Turbiana.

I just wish your color palate was better suited to reading - white text on black background is eye twisting hell.

The grapes and the wine are so delicious in Italy!

Love your approach to wine and wine research. I'd like to throw my two cents in and then throw two more in to muddy the waters, for consistency's sake with the path your research on this led you on. The Frankonian "Draibio" being Germanic sounds a lot like the German word for grape "trauben" which brings us closer to Trebbiano/Turbiana though now with a different meaning. However, the Italian "trabocare" also sounds like Trebbiano/Turbiana and means "overflow" which is similar to the idea of vigor in a way.