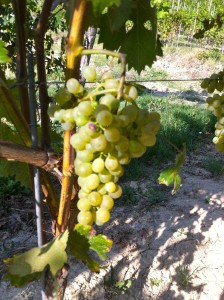 Generally speaking, the more obscure a particular grape is, the harder it is to research.  Grapes like Roscetto, Casetta and Blatterle are excellent examples of grapes that are grown in minuscule quantities and which were virtually impossible to find any information on.  All three of those grapes are Italian and were essentially brought back from the verge of extinction through the efforts of an individual producer, who is still essentially the only game in town as far as wines made from each individual grape are concerned.  The story of today's grape, Nascetta, is very similar to the stories of the grapes mentioned above, and as I started my first line of research, it looked like I was going to be dealing with the old dearth of research materials problem again.  None, and I mean none, of my print sources had any mention of the grape.  The Oxford Companion to Wine, Wikipedia, Vino Italiano, Barolo to Valpolicella, The Wine Atlas of Italy and Oz Clarke's Grapes and Wines were all blank on the subject of Nascetta.

My second line of attack if primary sources fail me is to see what Google can turn up.  I wasn't expecting to find very much, but I got quite a surprise as I shuffled through the search results.  It turns out that there are a lot of really excellent pieces online already about the Nascetta grape, from Evan Dawson's piece in Palate Press to Do Bianchi's bit on the history of the grape's name, to MW Christy Canterbury's piece on the grape posted only a few days ago.  I'd encourage anyone really interested in the grape to check out any of those links, as all are full of really great information.  Most of what follows is taken in some form from those pieces and a handful of others (which will be referenced in turn).

Nascetta is thought to be native to the Langhe region of Piemonte and references to it can be found in the literature as far back as the mid 19th Century.  It was named by Piemontese enologist Giovanni Gagna who mistakenly believed that it was related to a Sardinian grape called Nascu.  The most substantial and often-quoted historical reference to Nascetta can be found in in an 1879 work called Monografia sulla Viticoltura ed Enologia Nella Provincia di Cuneo which was written by a fellow named Lorenzo Fantini.  The grape is listed as Anascetta in that work (the A has something to do with the Piemontese dialect, which you can read all about in Do Bianchi's post linked above, if you're so inclined), and the relevant passage (translated by the writer of Rivetto Winery's blog) reads:

“Its goodness is uniquely owing to the nature provided by an exquisite grape, but tending toward art, which makes it absolutely defective for producers. Some try producing a white wine with Nascetta on the order of the wines of Reno, and they obtain results that are technically satisfying but economically burdensome, for which reason they renounce their studies of perfection and so from creating competition for Schloss-Johannisberg!”


The phrase "technically satisfying but economically burdensome" could be the epitaph for an untold number of grapes.  As you can see from the picture above, Nascetta's bunches appear to be pretty small and small bunches don't give much juice.  Couple these low yields with its temperamental behavior in the vineyard, and you've got a perfect recipe for a slow decline into oblivion.  As with so many other grapes, after phylloxera wiped most of the Nascetta plantings out, few producers were willing to replant the grape and opted for less finicky, higher yielding varieties instead.

The grape didn't die out completely, though, as a few farmers held on to a few stray vines and made wines from them for their own personal use.  In 1991, Valter Fissore, winemaker at Elvio Cogno, tried one of these wines from the 1986 vintage made by a man named Francesco Marengo.  Valter was so impressed that he devoted some land to the grape himself (it's unclear whether he received cuttings from Marengo or from the collection at the nearby University of Torino), and in 1994 bottled 800 bottles of Nascetta from his own plantings.  He called the wine "Nas-cetta," but was fined by the Italian wine authorities for including an unauthorized grape name on his label, as Nascetta was not recognized at the time as an approved variety (and they didn't believe that the hyphen was sufficient to mask what he was obviously trying to do).  The grape was added to the listing of approved varieties for the Langhe region of Piemonte in 2000, so any wines made prior to that time had to be labeled as vino di tavola.  The change in 2000 meant that Nascetta grapes could be used in Langhe Bianco DOC wines, but the grape name still couldn't be mentioned.  In 2004, Valter begins to bottle his Nascetta under the Langhe Bianco DOC under the fantasy name of “Anas-cëtta” in order to dodge the naming regulations.  After substantial lobbying, the grape name Nascetta was allowed onto the label of Langhe DOC wines starting with the 2010 vintage (the wines can be labeled Langhe Nascetta DOC rather than Langhe Bianco).


When I bought my bottle of Nascetta, Joe over at Curtis Liquors told me that he was told that Nascetta was essentially just a local clone of Vermentino and wasn't necessarily its own grape variety.  A handful of other sources online indicate that there may be some kind of relationship between Vermentino and Nascetta, but no one is clear on what that relationship might be, or even what their reasons are for postulating such a relationship.  Do Bianchi does mention that Nascetta was frequently blended with Favorita (which is another name for Vermentino, it turns out) in Piemonte in the 19th Century, but I don't see anything else that would indicate a relationship between them.  Since I can't find any studies dealing with DNA analysis of Nascetta grapes and since the VIVC has its own entry for Nascetta separate from Vermentino, I'm going to believe that it is a distinct variety until I see some genetic evidence to the contrary. 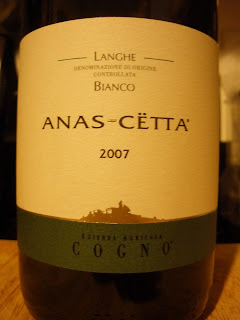 I was able to find a bottle a bottle of the 2007 Cogno “Anas-cëtta” from my friends at Curtis Liquors for about $25. In the glass the wine was a fairly deep gold color.  The nose was moderately intense with fresh cut green apple fruit along with almonds, honey and something vaguely woody.  On the palate the wine was on the fuller side of medium with fairly high acidity.  It was cidery with some granny smith apple fruit, dried sage, and almonds.  About 30% of the juice for this wine is aged in large, neutral oak barrels in contact with the lees for several months, and there was something slightly leesy and dairy-ish about this wine, though it was subtle and pretty well integrated.  Overall I felt that this was a bit washed out and maybe a little over the hill, but many, including Valter Fissore who made this particular bottle, seem to believe that Nascetta can age for up to ten years or more.  It's hard for me to believe that this wine will improve for another five years given how it's showing right now, but without having tasted a decade-old bottle, I guess I can't weigh in authoritatively either way.
Posted by Unknown at 4:18 PM