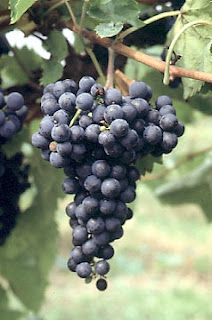 Chancellor is a hybrid grape that was created by our old friend Albert Seibel, who, among his 16,000 grape creations, also created the Verdelet grape we took a look at a few months back.  Those interested in Seibel's life and work are advised to click on the Verdelet link, as I went into some detail about him there and don't plan to repeat most of it here.  Seibel created Chancellor around the 1860's and named it Seibel 7053.  S 7053 was the offspring of two other Seibel crossings, Seibel 5163 and Seibel 880.

I've written a few times about how hybrid grapes are named, but Chancellor offers a unique opportunity to really see the process.  As I've mentioned before, nearly all of the hybridizers who were working in France in the mid to late 19th Century only named their grape creations with their own last name and a number.  These grapes typically retain these names until they start to gain some acceptance as viable commercial crops, and then someone, usually a body in the area where the grape is gaining prominence, names the grape in order to make it appealing and memorable to consumers.  Seibel 7053 is not only an unenticing name, but also would get very confusing if there were 10 different Seibel grapes available with only a three, four or even five digit number differentiating their names  Do I want Seibel 7053 or Seibel 7063?

As mentioned above, Chancellor was created in the 1860's in France and was, at one time, the most widely planted hybrid in France, but it was never really used to produce commercial wines, and so was never given a proper name.  It was introduced into the US in the 1940's and into Canada in 1946.  It became an important grape in some of the cooler regions of the US and Canada, such as the Finger Lakes region of New York.  In 1970, the Finger Lakes Wine Growers Association decided to rename Seibel 7053 Chancellor, and that name has stuck ever since.  The letter proclaiming Chancellor's new name can be viewed here, and it is interesting to see that this is also the same letter that gave Vignoles its current name.  It is also interesting to note that the names given in these circumstances don't always take.  Seibel 9549 is given the name Cameo by the Growers Association, but that grape is currently better known as DeChaunac.

Chancellor is considered to be one of the finest French hybrid vines for wine production.  It is considered cold-hardy, but does have an early bud break that can be a problem in areas with late spring frosts.  The vine is also susceptible to a handful of vine disesases, but it is thought that its susceptibility to both downy and powdery mildew has limited its plantings, especially in damp, humid areas like the eastern United States.  Chancellor is the grandparent to Noiret, a grape we took a look at a few months back that is generating some excitement as a promising new hybrid grape. 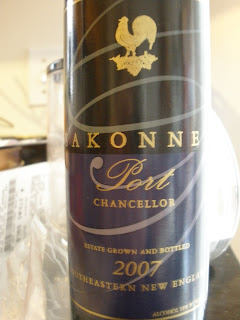 I had expected to be able to find a table wine made from the Chancellor grape during my trip to the Finger Lakes last summer, but ultimately was unable to do so.  The wine that I do have is from a winery in Rhode Island called Sakonnet, which is located about 45 minutes south of my home and just a few minutes outside of Newport, RI.  It is interesting in that it is a sweet fortified wine made in a Port style, rather than a table wine style, which is not something that very many people are trying to do with the grape.  I picked up this half-bottle of the 2007 Chancellor port for $25 at the winery. In the glass the wine was an inky, opaque purple-black color with a narrow crimson rim.  The nose was fairly intense with aromas of raisins, dried blueberries and dried figs.  On the palate the wine was on the fuller side of medium with medium acidity and high alcohol.  It was medium sweet with velvety dried blueberry, blackberry jam, prune, raisin and fig flavors.  I've tried this wine on a few different occasions and have found nearly every time that the alcohol is excessively prominent and the wine burns as you drink it.  Most fortified wines taste a little hot, but the high alcohol is generally carried pretty well and balanced by the ripe, sweet fruits, but the alcohol in this wine is really out of balance.  The wine is pretty tasty overall and is definitely interesting, but it is a bit pricey and has some obvious flaws as well.
Posted by Unknown at 2:39 PM