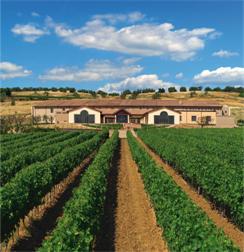 Roscetto is one of those rare Italian grapes that is grown in a single place and made by a single producer and is not produced anywhere else in the world.  If you've found this page, you've probably gone through quite a few pages that have written about the grape and every single one of them mentions a single producer and winemaker: Riccardo Cotarella of Falesco Winery.  Wikipedia comes up empty, Jancis Robinson's Oxford Companion of Wine makes no mention, and even the VIVC (Vitis International Variety Catalog) has no results for Roscetto.  The only information that is available is coming from the winery, either in articles written about the winery or winemaker or from the winery's website itself.  Normally, I like to use a variety of sources so I can check them against one another, but in this case, not only is all the wine on earth made from this grape coming from a single estate, but seemingly all the information on earth about the same grape is coming from there as well.

So what do we know?  Falesco winery has a bottling called Ferentano that is the only 100% varietally bottled Roscetto on earth (some of their Roscetto crop goes into their Est! Est!! Est!!! bottling).  According to Falesco, the grape is an ancient variety indigenous to the Lazio region (and more specifically, Montefiascone, a town in northeastern Lazio about 100 km from Rome).  It is a white grape that turns a little pinkish as it ripens.  It has thick skins and after the grapes are crushed, the skins and juice are held together at a very low temperature for awhile (a process called cryomaceration) in order to extract the phenolic compounds from the skins.  The wine was first bottled by the Falesco winery in the 1998 vintage.  And that's about all I can find.  There's plenty of information out there about the winery itself, which is perhaps best known for their Merlot bottling called Montiano, though they have a pretty wide variety of offerings. Wine.com informs me that "in 2006, our customers purchased more bottles of wine from Falesco than from any other winery in the world."  I don't know how many cases of the Ferentano are produced, but I have found this wine in two different wine shops in the Boston area so I don't think production is down in the cult numbers. 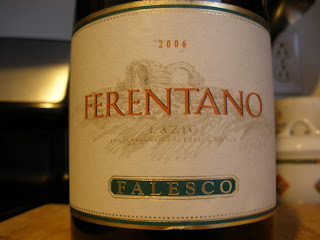 The bottle I was able to pick up was from the 2006 vintage (oddly, both local stores where I've found this wine were from the 2006 vintage).  It cost me $12 at Bin Ends, but I picked it up from a sale rack marked 50% off.  I believe this usually retails for around $20.
The wine had a rich, gold color in the glass.  When I first pulled the cork, the wine had a heady, appley perfume that faded pretty quickly into something fairly neutral with some buttery toast notes.  It was rich and full-bodied on the palate with good acidity and a creamy texture.  There were ripe apple, buttery toast, lime peel and toasted nut flavors with some vanilla.  It was pretty clear that this had seen some oak, and the winery web site confirms that the wine spends four months in oak barriques.  I was very pleasantly surprised at how lively this was at five years old.  This probably has the stuffing for a few more years in bottle.  It's very similar to white Burgundy or some of the more restrained California Chardonnays.  I don't know what kind of oak is used here, but it's almost certainly not American, and if you made me choose, I'd guess its mostly new French oak.  This is not really the style of white wine I go for, but this was really an exceptional bottle.  If you can track this bottle down, definitely give it a shot as it's a very unique grape (even if it is made in an international style).
Posted by Unknown at 2:57 PM

I know you know a lot about grapes. In this case though I guess there is more information available as you think. "Roscetto" seems to be a different spelling for "Rosetto" (also known as "Trebbiano giallo") used since ever for a lot of white wines (e.g. est!est!!est!!!) around Lake Bolsena, as member in a blend. Falesco seem to be the only ones to produce a single-vatiety wine. And, yes, Jancis Robinson in her blog writes about Ferentano

I just checked on Rossetto in Robinson & Co's Wine Grapes and it does look like Rossetto and Roscetto are the same grape, but according to Vouillamoz, it is not the same as Trebbiano Giallo. Rossetto is also known as Greco di Velletri, Greco Giallo and Greco Verde, but it is not related to the Greco of Campania or of Calabria. It is allowed up to 15% in Est! Est!! Est!!! and can be made into a varietal wine in the Colli Etruschi Viterbesi DOC in Lazio, but it doesn't look like it is used in "a lot" of wines, as Wine Grapes indicates that it is not a very popular grape with local farmers because of its low yields.

Also interestingly, a couple of Italian enologists who were experimenting with making varietal Rossetto found that they had to freeze the grapes in order to get them to release their yellowish pigments into the must. Apparently the wines were too clear without taking this particular step.