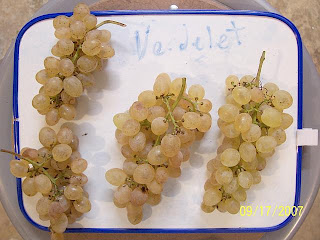 Entering words blindly into Google image search isn't always a wise idea.  There isn't usually a lot of overlap between grape names and tawdry photos, but I do occasionally get some racy results.  Other times, I find out that there's a weird kind of synonymy between the grape I happen to be researching and some random thing in the world.  Today, for example, I found out that there is apparently a character named Verdelet in a video game called Drakengard who "is a pious man who is always careful of his words and of doing the right thing, but places himself first should the situation becomes dire."  Sure, I could eliminate these kinds of results by always including the word "grape" in my searches, but sometimes those wrong results can shed some interesting light on how a grape may have gotten its name, like with the Trousseau grape.  Most of the time, though, those wrong turns just end up at dead ends like the pious, self-interested Verdelet of Drakengard who, I think we can safely assume, has nothing to do with today's grape.

Today's grape is Verdelet and it is a hybrid grape that was created by the great French hybridist (hybridizer? hybridder?) Albert Seibel, who we've mentioned in passing in a few posts around here but who we've never really taken a good, detailed look at.  Seibel lived from 1844 - 1936 and was a physician by trade.  Those of you who are up on your vinous history will note that Seibel was a young man through the heart of the Phylloxera epidemic, which really started to become a noticeable problem in France around the 1860's.  Once it became known that native American vines were the source of the louse and, further, that the native American vines seemed to be immune to it, one of the proposed solutions to the scourge was to create hybrid grapes by crossing native European vines and native American vines.  This solution was successful, but was not ultimately the answer to the problem since the resulting hybrid vines were unable to produce wines that were qualitatively similar to the native European vines.  But just because it wasn't the ultimate solution doesn't mean that it wasn't a viable (and profitable) solution in the short term, and Seibel ended up creating a company that was focused on developing new hybrid grape varieties.

Seibel and his group ultimately created over 16,000 different hybrid grapes and had as many as 500 of those available for commercial cultivation at one point.  While nowhere near that many are still cultivated today, it is shocking how many are still planted and made into wine.  One might wonder why anybody would bother with these vines since the Phylloxera louse has been rendered virtually obsolete by the technique of grafting European vines onto native American rootstocks.  The answer is that many of the hybrids created are also tolerant of more extreme climactic conditions, especially cold conditions, such as those found in the northeastern or mid-western United States or in the UK.  Further, they tend to be quite disease resistant and also tend to yield generously.  For climactic regions that are too harsh for the cultivation of vinifera species, the French hybrids that Seibel and others like him created are a good second choice.  Even though the wines made from them aren't as interesting or complex as wines made from vinifera grapes, they are much better than the foxy, ultra-sweet wines made from native American grapes.

When I visited the Finger Lakes region of New York recently, I came across a wide variety of hybrid grapes, many of which were created by Seibel.  Verdelet, also known as Seibel 9110, is certainly one of them, but Chancellor, Chelois, De Chaunac and Vignoles were also well represented.  Grapes like Aurore, Rougeon, and Rosette are also relatively well represented in other parts of the US, Canada and the UK, while the Plantet grape still covers quite a bit of ground in the Loire Valley in France.  Verdelet is one of the less common Seibel grapes, and as a result, specific information about it is limited.  As you can see from the picture above, the grapes are nearly clear when ripe with little green pigmentation their skins.  Most nurseries that offer the vine for sale indicate that it is mostly used as a table grape, and a very productive one at that.  In a book on wines from British Columbia in Canada, the author gives an anecdote about a producer who obtained 120 tons of fruit from only 6 acres of land planted to Verdelet.  Acreage devoted to the grape is declining pretty much everywhere, though it is apparently still fairly popular in Texas. 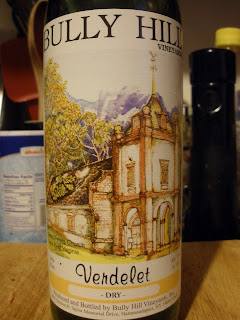 While in the Finger Lakes, I only came across a single wine made from the Verdelet grape.  It was made by Bully Hill Vineyards, who we've had some dealings with before around here, and it was a NV wine that I picked up for about $8 in their tasting room.  In the glass, this wine was a medium lemon gold color.  The nose was moderately intense with aromas of pear, ripe apple, grapefruit and a bit of peachy stone-fruit.  On the palate the wine was on the lighter side of medium with high acidity.  The label says the wine is dry but I found it to be just off-dry.  There were flavors of lime citrus, peach and grapefruit that were tart and zippy.  It wasn't a particularly complex wine, but the flavors were bright with a nice intensity.  It reminded me a little bit of Riesling, though without the depth and concentration that good Rieslings can have.  Overall, I was very pleased with this wine, especially at only $8, and would be eager to try it again the next time I find myself in the area.  It was definitely the best thing that I tried from Bully Hill, though that isn't exactly saying a lot.  Bully Hill makes a ton of different wines (I mean a ton) and I tried only a few while I was there (for the reasons why, see this post on the St. Croix grape).   For the most part, the quality of wines made here isn't that great, but this wine and the Chardonel I wrote about last week were were pleasantly surprising.  The Verdelet isn't listed on their webpage, for some reason, so I don't know what kind of availability they usually have, but if you happen across it, it's definitely worth a try.
Posted by Unknown at 4:15 PM