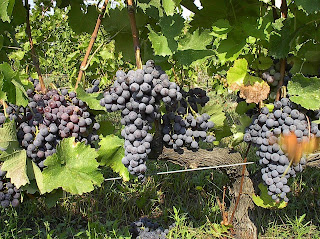 Xinomavro just sounds exotic.  You look at the word with all those rare consonants and rolling syllables and it just feels different somehow.  I was reading through a few wine sites' April Fools posts this past year and the grape that was mentioned the most in their joke posts was Xinomavro by a fairly large margin.  Let's face it: there just aren't that many words that start with the letter "X" and there certainly aren't very many grapes that do either.  While it's certainly not the most obscure grape on the planet, it sure sounds like it should be.  I've briefly covered Xinomavro on this site before, though I wrote about a white wine produced from the grape.  Since I wrote that post, I've found that there are some white wines made from the Xinomavro grape, but the most exciting examples are universally red.

Xinomavro is found mostly in the Imathia subregion of Macedonia in northern Greece.  Within Imathia is the town of Naoussa where the best Xinomavros are made.  It can be a little tough to find Xinomavro wines because the grapes is not usually mentioned on the label, but rest assured if your label says "Naoussa" then you're in very good shape as this area is a monoculture and does not produce wine from any other grape.  The name Naoussa is a Greek corruption of the Roman name for the village, "Nova Augusta," and the region has produced wine for thousands of years.  When the Ottomans took over Greece, the townspeople of Naoussa were able to negotiate some particularly favorable deals with them and they were able to keep and maintain their vineyards for the duration of the Ottoman occupation (since the Ottomans were Muslim, many regions in Greece were forced to abandon wine production in order to comply with Ottoman religious custom).  Political struggles between local leaders and a disastrous revolt against the Ottoman occupiers in the early part of the 18th Century were major setbacks for the region as they exacted serious financial, territorial and human tolls on the region.  They've since rebounded nicely and the region was given Appellation status in 1971.

Xinomavro itself is a finicky grape to grow.  It doesn't like very dry conditions, is susceptible to several fungal diseases, and is very sensitive to soil types, planting densities and canopy management.  There are also many different clones of the grape which differ markedly from one another in virtually every way that you can think of.  They flower and ripen at different times, have different bunch and berry sizes, have different vinous characteristics (fruit, acidity and tannin) and reach their peak ripeness in different microclimates.  No one clone seems to have the magic combination so many different clones are grown on different sites and blended together in the winery.  Once you get past all the growing troubles and issues in the winery (many clones have poor color stability and can create very odd aromas when vinified), the wine that you get tends to be fairly light in color and very high and acidity and tannin.  In short, it is the polar opposite of the kind of wine that is very much in fashion right now in that it's not very accessible in its youth and tends to demand food.  Needless to say, Xinomavro is facing several uphill battles in the world marketplace. 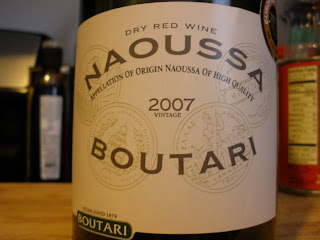 But is it all worth it?  I was able to sample two different bottlings from the same producer in order to find that out.  The first wine I tried was the basic Boutari Naoussa bottling.  I picked up a bottle of the 2007 vintage for around $18.  The wine had a light ruby color in the glass and and a generous nose of crushed red berries, stewed cherries, rich raspberry and some redcurrant with kind of a leafy, herbal edge.  There was kind of a chocolate note in it too, like a chocolate covered dried cherry.  The texture was a little thin and the wine had a very high acidity and very grippy tannins.  I've seen a lot of comparisons between Xinomavro and Pinot Noir, but I definitely agree more with Konstantinos Lazarakis (in his The Wines of Greece) in that I think the more appropriate comparison is with Nebbiolo based wines from the Piedmont.  This wine demands food (think meats and pretty much anything you'd serve with a Barolo) and has the structure to age for awhile yet. 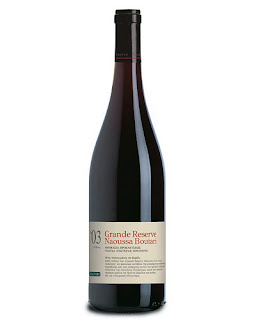 The second wine I tried was also from Boutari, but it was their Grand Reserve bottling.  I grabbed the 2003 vintage of this for about $40.  The Grand Reserve level from Boutari are held for a few years before they are released.  They see two years in oak barrels that are a little larger than the barriques used in most of the world (those hold about 225 liters while the ones at Boutari are either 400 or 500 liter barrels), half of which are new oak and the other half neutral oak.  They are aged an additional two years in bottle.  In the glass, this was a very pale violet color with little saturation.  The nose had a spicy, woody kind of aroma with redcurrant, stewed tomatoes, crushed sage, tobacco and old leather.  The wine was medium bodied with high acid and high tannins (again, this is a food wine and not an afternoon sipper).  The fruits were faded pretty badly from this with just a vague sense of raspberryish red fruit along with dried sage and something a little floral.  Though the nose was more interesting and complex on this wine, the palate was not as generous as the entry level Naoussa wine and I don't know if it was in a dumb phase or whether this was just an off-year (Greek wine vintage charts aren't very common).  It's not that it was a bad wine, but for the money I'd much rather drink the entry level Naoussa bottling rather than run the risk of a bad vintage of the Grand Reserve, especially since Xinomavro is so finicky in the vineyard and very susceptible to vintage variations.  These Grand Reserve bottlings are famously long-lived (from good years, anyway) so I'd like to have a chance to taste one with about 10 years of age on it and see how it's doing at that point.  In the meantime, if you're in the mood for something Barolo-like but don't want to fork over Barolo bucks, give Xinomavro a shot.
Posted by Unknown at 4:15 PM