Let's talk about the Blauer Portugieser grape.  Of the two words in the grape's name, Blauer may seem like the one that needs the most explanation.  Not true.  Blauer simply means "blue" and is a fairly common prefix for German/Austrian grape names (think Blaufränkish or Blauburgunder).  Of course, that may immediately lead to another question: why does a grape called "Portugieser" need a Germanic prefix?  Well, Austria and Germany are the most prolific growers of Portugieser, as it is the third most planted red variety in each of those two countries (it occupies between 4,000 and 5,000 hectares in each).  The vine is also widely spread throughout Eastern Europe and is grown in Croatia, the Czech Republic, Romania, Slovenia, and Hungary, where it is one of the permitted grapes in the Bull's Blood blend.  It was even once widely grown in southwestern France, where it was known as Oporto or Portugais Bleu.  So where does it rank in Portuguese production?  Well, it doesn't.

As far as I can tell, Portugieser isn't actually grown in Portugal at all.  In fact, depending on what sources you use, Portugieser may not have any connection to Portugal whatsoever.  The Austrian Wine website maintains that the grape is native to Portugal and was taken to Austria by the Baron von Fries in 1770.  Most other sources, though, indicate that the grape is native to Austria with no apparent or proven link either to Portugal or to any other Portuguese grape.  The von Fries origin story must be persistent, though, as most of the synonyms for Portugieser incorporate some reference to Portugal: Kékoporto in Hungary, Modrý Portugal in the Czech Republic, Portugaljka in Croatia, etc. (those who are terribly interested can peruse the full list of synonyms here).  I suppose it's possible that wines made from the Portugieser grape reminded the drinkers of wines from Portugal, but that seems unlikely given the grape's reputation for producing pale, light bodied red wines, a far cry from the powerhouse Ports that were likely in circulation in the 18th and 19th Centuries.

Whatever the true origin of the name is, the grape is now widely known as Portugieser and is relatively widely planted, though little of it gets exported.  Mostly this is because the wines made from the grape have a pretty lousy reputation.  The Oxford Companion to Wine writes that Portugieser is a "black grape variety common in both senses of that word in Austria and Germany" which "can taste disconcertingly inconsequential to non-natives."  They further write "such wines are rarely exported, with good reason, and are only rarely worthy of detailed study."  So why does the grape take up so much real estate in these countries?

Well, the main reason is that Blauer Portugieser is really easy to grow.  It is resistant to a wide range of vine diseases, most specifically coulure, or poor fruit set (when the berries are very young, many of them fall off, which is called coulure).  Because of its resistance to this particular affliction, Portugieser is an explosive yielder, sometimes producing as much as 120 hl/ha of juice, or around 7 tons of fruit per acre.  As you might expect, if the vine is allowed to produce to its full potential, the resulting wines are dilute and the grape's naturally low acidity is stretched even thinner.  There are some producers who are trying to produce fine wines from this unappreciated grape by restricting yields, using old vines and barrel-maturing their wine. 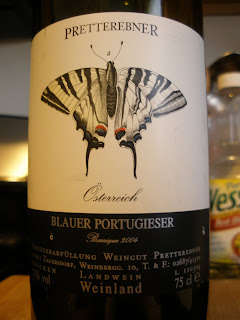 To be honest, I'm not at all sure if the maker of the bottle I bought is one of these producers or not.  I tried to go to the producer's website, and, after fighting off the pop-up ads for getting a green card, was unable to understand anything on the site, since the English translation button doesn't seem to work (I took Latin in school so these Germanic languages are pretty opaque to me).  So, we'll just have to go by what's in the bottle.  The wine I was able to find was from Pretterebner and it was from the 2004 vintage.  I picked it up for about $13.  In the glass, the wine was a medium ruby color with a fruity, grape juice kind of nose.  There were also some aromas of plum and red cherry.  On the palate, the wine was medium bodied with no tannins and acidity on the lower side of medium.  It tasted a bit like watered down grape juice with some cherry and raspberry fruit.  As the wine sat in my glass, it started to pick up a kind of rubbery aroma and taste that reminded me of when I was a kid and on really hot days, we would drink water from a garden hose.  The smell and taste of the water that had been sitting in the hose in the sun is kind of what this started to taste like.  Unfortunately, it didn't get a whole lot better as the rubbery smell and taste started to taste a little burnt.  It really started to remind me of some really lousy Pinotage wines that I've had.  My sum-it-up line in my notes reads "this was nice for the first 10 minutes it was open...then it tasted like an old tire."  This is certainly not my new favorite wine, but as with so many others on this site, I'm not willing to write it off wholesale because of one bottle.  I'll give it another shot, but I'd pass on this particular bottling unless you're really into drinking what a car accident smells like.
Posted by Unknown at 1:37 PM

Nice post - I have to say, despite living in Austria for several years, I've never tried BP.

From memory, it tends to be seen as the poor cousin of Blaufraenkisch - which is not saying much as whilst there are some decent, if not rather good, BFs out there, the overall average is not that high.

On a linguistic note, the various prefixes - blau (Ger), kek (Hu), Modry (Cz) - all mean the same thing - blue. So, for example, kekoporto is just blauer portugieser translated into Hungarian.

My first and, so far, only experience with this type of wine was a few days ago in an upscale Prague restaurant. The 2009 Modry Portugal vintage was quite a pleasant surprise. The layers of flavours were complex and complimentary: berries, slight woody notes without the overly harsh tannins that often accompany wood tones. Perhaps we were lucky in finding the one vintage that excels, but, for now, I am intrigued and eager to try more.

Just tried a 2009 Blauer Portugieser "Lust & Laune" produced by Family Zull in Lower Austria, a very pleasant surprise. It drank like a Beaujolais with a bit more body. Starting out a bit tight at first, it opened up nicely. My wife and I paired it with a pork chop with Gorgonzola sauce, broccoli rabe and mashed potatoes for me, and shrimp scampi for her; it stood up to both very well. And at $12.70 (in a case) in CT, not bad. I would think that it also would be a great aperitif wine in the summer, slightly chilled. I guess it comes down to a good wine maker to get a good product.