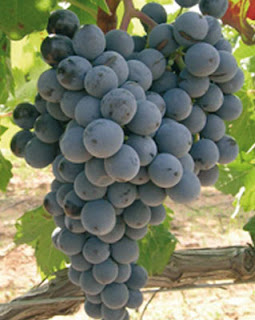 Let's talk about Cava for a little bit.  I know, I know, Cava is everywhere and hardly qualifies for a site like this, but hear me out.  Yes, a lot of Cava is made (about 31 million gallons per year or about 1/3 of the total output of Champagne), and yes, a lot of it is your standard, run of the mill stuff made from one, some, or all of the three primary white grapes: Macabeo (known as Viura in Rioja), Xarel-lo and Parellado.  Your typical bottle of Cava is probably made from a blend of these grapes with Macabeo generally accounting for about half of the final blend.  There are other grapes that are permitted in the Cava blend, though.  The ubiquitous Chardonnay has been permitted for the last 25 years or so, and Malvasia can also be found in some Cava blends.

But not all Cava is made from white grapes.  There are rosado Cavas available as well and the grapes permitted in those wines are Garnacha (Grenache), Monsatrell (Mourvedre), Pinot Noir and Trepat.  Three of those grapes should be pretty recognizable to the average, informed wine consumer, as they have homes elsewhere in the world where they get to be shining stars, but Trepat?  What the heck is Trepat?

My first line of attack in most of my research is the Oxford Companion to Wine, which is not particularly helpful when it comes to Trepat.  The book's entry reads in full: "indigenous red wine grape of north east Spain, particularly in Conca de Barberá and Costers del Segre. About 1,500 ha/3,700 acres are grown, used mainly for light rosés, but it has shown some intriguing potential for fine reds." A little extra digging shows that Trepat is picky about the soils it thrives in (it's not a fan of calcium-rich soils), though it does appear to be pretty resistant to most fungal diseases.  It buds early and is thus susceptible to frost damage, which is more of a problem in this region at some of the higher altitudes, but Trepat is generally planted on lower-altitude sites.  There are a few sources that say that there is as little as1,000 ha of Trepat planted, and I'm not aware of any plantings outside of Spain.  The overwhelming majority of the grapes grown are used in the production of rosado Cava, though there are a few producers who do make a still wines either as a full-blown red or as a rosado. 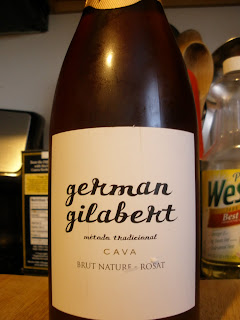 I was able to pick up a bottle of the German Gilabert NV rosado Cava from my friends at Curtis Liquors for around $15.  The blend for this wine was 85% Trepat and 15% Garnacha.   The wine was aged for 10 months on the lees before disgorgement, and it is a Brut Nature Cava, which means that there is no dosage (a measure of wine and sugar typically added to sparkling wines right before final corking) added prior to bottling so the wine is very dry.  The wine had a rich pink color in the glass with lively bubbles and aromas of light strawberry and raspberry fruit.  On the palate, the wine was very dry with high acid and toasty strawberry/raspberry fruit.  If you're looking for depth and complexity, keep looking because the name of the game here is clean, refreshing red-berry fruit with a few of the secondary aromas that you get with bottle fermented wines.  This is a big value wine, as most Cava is.  I'm not aware of any other kind of traditional-method sparkling wine in the $10-$20 range that is more consistently drinkable (if rarely great).  It can be enjoyed on its own but the intense dryness here makes me want to have this with food more than I want to sip it alone.  I had mine with a ham that I cooked for Easter dinner and it was a very nice match.  I could also see this with some sushi or with a nice cheese plate.
Posted by Unknown at 1:22 PM

Researching the Trepat grape variety for one of my posts brought me to your site - I should have probably just come straight here in the first place :)

My post on a Trepat / PN cava rosado will be going up soon.