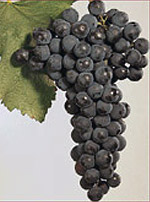 In many ways, the story of the Schioppettino grape is the story of a lot of the grapes that I've written about on this site.  It's a grape that enjoyed a degree of popularity at some point in the distant past, and then, for one reason or another, was on the brink of extinction.  It has enjoyed some limited success and a few new plantings in more recent years, but, on the whole, it's still little known outside of a handful of regions.  While the outline of the story may seem familiar to longtime readers, it's always the details that make an individual story worth telling.  After all, if we rejected out of hand all stories with similar structures and outlines, then writers would have had to give up their craft thousands of years ago and the modern entertainment industry would have had to fold up shop before it even got off the ground (though whether this would have been such a bad thing is something you can ponder at your leisure).

So what are the details of Schioppettino?  For starters, it's a very old grape.  There are written records that reference the grape as far back as 1282 AD when the wine was used in a Slovenian wedding ceremony.  It's thought that the grape may be native to Slovenia, or at any rate to some area around the Italian-Slovenian border.  One of its synonyms is Ribolla Nera, indicating that it may be a dark-skinned mutation of or at least a relative of the Friulian/Slovenian grape Ribolla Gialla, though I can't find any indication of just what the specific relationship between the two grapes may be.  I would hazard a guess that since Schioppettino is the more common name, the relationship between it and Ribolla Gialla may be merely linguistic, but I would love to read about it if anyone has done the genetic research.  There are a few different explanations for the use of the Schioppettino name.  Some say that it comes from the Italian word scioppare, which means "to burst," while others say it comes from schioppettare which means "to crackle."  In either case, the bursts or crackles are a reference to a version of the wine that is made locally and sold very young with some residual CO2 in it, leaving small, snappy bubbles behind that crackle on the tongue.

As mentioned above, Schioppettino was, at one time, in danger of disappearing completely.  Like so many grapes throughout the world, Schioppettino was almost done in by the scourge of phylloxera that swept through Europe's vineyards in the mid 19th Century.  Many grape growers who found their vineyards decimated saw the plague as an opportunity to start fresh, and when it came time to replant, they often opted for less finicky and higher yielding vines, but in the case of Schioppettino, fashion was the force that nearly drove it into extinction.  Many of the growers in Friuli had their sights set on international markets rather than just local ones and so they replanted many of their vineyards to the classic French varieties of Cabernet Sauvignon, Merlot, and Sauvignon Blanc, among others.  Plantings of the grape were so scarce after phylloxera that it was not included as an authorized variety in any of the DOC or EU regions until 1978, when the EU stepped in and issued a decree authorizing (or possibly just encouraging) the use of the grape in the Udine province of Friuli, which most sources credit as the act that saved the grape from oblivion.  Plantings have risen over the past few decades to the point that the grape is no longer thought to be at risk for extinction, but certainly not to the point where it is widely available or well-known. 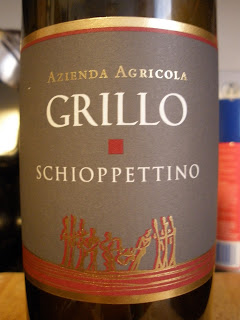 I was able to find a bottle of the 2008 Azienda Agricola Grillo (not to be confused with the Grillo grape) Schioppettino from the Colli Orientali del Friuli region of Italy at Central Bottle for about $23.  In the glass the wine was a fairly deep purple-ruby color.  The nose was nicely aromatic with rich black cherry and blackberry fruit backed by chocolate.  It wasn't all that complex, but it was pure delight to smell.  In the glass the wine was on the fuller side of medium with medium acidity and soft, silky tannins.  There were flavors of rich black cherry, blackberry and blueberry fruit with nice earthy chocolate and vanilla undertones.  The fruit here was pure, focused and right up front in the flavor profile but backed by excellent structure and a soft, smooth kind of earthiness.  The flavor profile wasn't particularly varied or complex but the flavors were deep and powerful without coming across as jammy or sweet.  For $23, I thought this wine was an excellent value and I wouldn't hesitate to buy not only this bottle again, but I also wouldn't hesitate to buy any wine made from this grape.  I am very curious about the frizzante wines made from this grape and see that there are some bubbly Schioppettinos imported into the US so I'll definitely be keeping my eye out for any of those.
Posted by Unknown at 12:27 PM

I had a superb Riserva Schioppettino dating from 2004 in Pordenone, Friuli last year. The producer is Bressan. It was one of the finest wines I'd ever tried from the region. The non-Riserva bottling (2006 last time I checked) is available in the UK, though I've yet to try it; don't know about the US.