Pineau d'Aunis is a grape whose many names can give the illusion of familiarity.  Its most common name, Pineau d'Aunis, puts one in mind of the Pinot family of grapes, which it is related to only linguistically, as there is no genetic relationship between the Pinot family and Pineau d'Aunis that I am aware of.  Both Pinot and Pineau come from the French word for "pine" because the bunches of grapes supposedly looked like pine cones to those who were naming them (think of Pignolo or Pignoletto in Italy).  The d'Aunis part of the grape's name comes from the Prieure d'Aunis, a monastery located near the Saumur region of the Loire Valley.  It is thought that the grape was first "discovered," or, more accurately, selected for by the monks there.

DNA analysis would clear the whole matter up, but it would seem that no one has bothered to give it a try.  Which is too bad, really, because the grape is old enough and has been in the region for long enough that there may be some interesting discoveries to be had.  It's said that Henry III of England was a fan of the wine and had it imported in from France in the mid 13th Century.  Apparently the English ruled over Anjou, located in the Loire Valley, for a few decades before Henry III came into power and Henry tried, in vain, to bring the region back under English rule throughout his reign.  I doubt that Pineau d'Aunis wine had too much to do with Henry's motivations, given the extraordinarily complex web of political intrigue throughout Western Europe at the time, but it certainly could have played some role.  Wars have been waged for far less important reasons than a barrel or two of wine.

Today, it would be a wild exaggeration to call Pineau d'Aunis a "wine for Kings."  I'm not entirely sure what the reason for the grape's ultimate decline was, but my guess is that the white wines of the Loire Valley began to gain in popularity and profitability at some point and many growers pulled up their red grapes in favor of the twin darlings of the Loire Valley, Sauvignon Blanc and Chenin Blanc.  As of the year 2000, there were fewer than 1000 acres (about 430 hectares) planted to Pineau d'Aunis, most of which ends up as an anonymous minority component in some Loire Valley red or rosé wine.  You're most likely to find it as a varietal wine in the Coteaux du Vendômois, which is around the center of the Loire Valley (from east to west), just north of Vouvray.  Most wine made under this appellation is rosé, and I was able to find two examples in this particular style.  There are also a handful of producers who make red wines that are all or nearly all from the Pineau d'Aunis grape, and I was able to try one of those bottlings as well.  Finally, there are some people who are just doing crazy things with the grape, and from one of those producers I was able to find a fully sparkling white wine made from Pineau d'Aunis grapes. 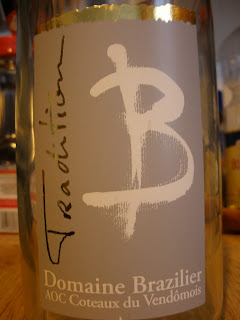 The first bottle that I was able to find was the Domaine Brazilier Pineau d'Aunis rosé from the Coteaux du Vendômois AOC which I picked up for about $17.  If my bottle had a vintage, I wasn't able to locate it.  In the glass, the wine was a very pale salmon pink color.  The nose was moderately aromatic with aromas of fresh cut watermelon and strawberry fruit.  On the palate, the wine was on the lighter side of medium with medium acidity.  There were light, delicate flavors of strawberry, raspberry and watermelon fruit with a touch of herbaceousness to it.  Given the price tag on this wine, I was a little disappointed in how straightforward and simple the aroma and flavor profiles were.  I don't generally buy rosé wines with the expectation that they are going to be much more than fruity and refreshing, but once I pass a certain price threshold, I do begin to expect a little more out of a wine.  At nearly $20 per bottle, I feel that this probably should have been more complex and interesting than it was.  It's entirely possible that this wine was past its prime, but without a vintage date, it's hard to say.  Since there are other examples of this grape in this style for much less money, I'd advise caution with this particular bottling at this price point. 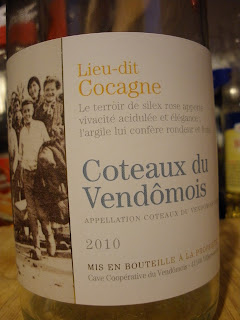 The second rosé that I was able to try was the Cave Cooperative du Vendômois bottling from the Coteaux du Vendômois AOC which I picked up for about $10.  As you can see on the label, the wine is labeled as "Lieu-dit Cocagne," which I believe means that the grapes came from a specific parcel of land referred to as Cocagne, though I don't have any idea what or where that is.  The wine is made by a cooperative comprised of 25 growers and about a dozen different winemakers who, together, farm about 160 hectares of land, about 50 of which are devoted to the Pineau d'Aunis grape.  In the glass, the wine was a pale pink color.  The nose was very aromatic, dominated by pink grapefruit and fresh strawberry fruits.  On the palate, the wine was medium bodied with high acidity.  There were flavors of watermelon, pink grapefruit and grapefruit peel with a touch of grassy herbaceousness that put me in mind of Sauvignon Blanc.  The wine had the kind of wonderfully clean, minerally finish to it that makes you keep reaching for the glass..  This wine was beautifully perfumed with deep, pure fruit flavors and an electric nerve of acid that kept it bright and refreshing.  THIS is the kind of rosé that I love to drink and at only $10 a bottle, it's really an incredible value. 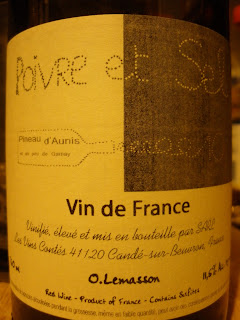 The next wine that I tried was the 2010 Olivier Lemasson "Poivre et Sel" bottling from Touraine in the Loire Valley.  I picked this bottle up from my friends at the Wine Bottega for about $20.  I've read online that this wine is 50/50 Pineau d'Aunis and Gamay, but the bottle says"Pineau d'Aunis...un peu de Gamay," which my high school French tells me means there's just a little bit of Gamay in it (the importer website says it is 90/10, which is probably the more accurate figure).  The Poivre and Sel ("pepper and salt") is a reference to the fact that many people find a peppery aroma and flavor in the Pineau d'Aunis grape which the winemaker believes is perfectly complemented by a little Gamay as the salt to Pineau's pepper.  In the glass, this wine was a fairly light purple-ruby color.  The nose was moderately aromatic with plummy, cherryish fruits and a bit of that natural wine funk.  On the palate the wine was medium bodied with fairly high acidity and medium tannins.  There were flavors of juicy, tart red cherry and red berry fruit and, yes, a hint of pepper. There was also a touch of tart cranberry and horsey funk on the finish.  This wine had a nice balance of bright and juicy fruit with just enough earthy funk to keep it interesting. I found it somewhat similar to the Grolleau that I wrote about a few months back.  Is it worth $20 a bottle?  If you're looking for an upscale alternative to Beaujolais or are looking for a conversation piece to have at a dinner with friends, then yes, I think the price is fair. 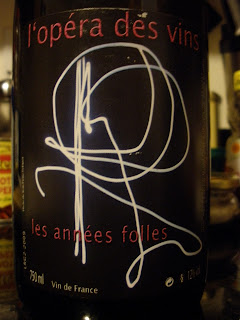 I've saved the most interesting bottle for last.  The final Pineau d'Aunis that I tried was the NV Jean-Pierre Robinot "Les Annes Folle" sparkling Pineau d'Aunis that I picked up from the Wine Bottega for about $30.  Robinot has two lines of wine that he makes: the "Domaine de L'Ange Vin," which are made from his own grapes, and the "L'Opéra des Vins" which are made from grapes he buys from other local growers.  This bottle is in the latter category.  The wine about 80% Pineau d'Aunis and 20% Chenin Blanc.  In the glass, the wine was a bronze-gold, almost russet kind of color that was very fizzy and slightly cloudy (the method used here is méthode ancestrale, like in our old friend Mauzac).  The nose was fairly reserved with some green and baked apple aromas with a bready, yeasty kind of undercurrent.  On the palate, the wine was medium bodied with high acid and a lot of bubbles.  I was expecting this to be closer to frizzante, but the bubbles were pretty serious and vigorous.  The flavor profile was yeasty and bready with some tart apple fruit that was almost a little cidery and just a touch of pastry dough.  The secondary flavors and aromas were much more noticeable than the fruits here, so if you're looking for something like Prosecco or Moscato d'Asti, keep looking.  I'm conflicted about this wine because on the one hand, it's a really cool and interesting wine, but on the other, it's hard to say if it's tasty enough to really warrant the $30 price tag.  I personally enjoyed it, but it's not going to be for everyone.  I would guess if you've read this far, you probably already know whether this is something you'd be really into or really afraid of, so I guess you should just follow your gut.
Posted by Unknown at 4:03 PM