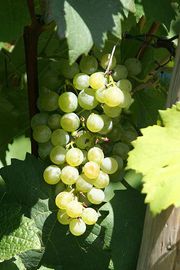 Grüner Veltliner is one of those grapes that I was very unsure about for this site.  Yes, it's relatively obscure to the wine novice, but it is definitely a grape on the rise right now.  A few years ago, it was an interesting curiosity that popped up every now and again on a wine list or at a tasting, but lately I can't think of a single wine shop I've been in in the past year that wasn't carrying a bottle of Grüner.  I thought about it and ultimately decided that the world of wine was so vast that I could pass this one over.  My resolve loosened, though, when I found a bottle of sparkling Grüner and it dissolved completely when I came across a bottle on my recent trip to the Finger Lakes region of New York.  So, without futher ado, ladies and gentlemen, let's all welcome Grüner Veltliner to Fringe Wine.

Grüner Veltliner is very popular in Austria where it accounts for somewhere between 32% and 36% of the land under vine (and in some areas it accounts for over 50% of the land under vines).  It is, far and away, Austria's most important and, within the past decade or so, its most esteemed variety.  The name itself means "green grape from the village of Veltlin in the Tirol" and for many years, it was thought to be somehow related to two other grapes grown in Austria with veltliner in their name: Roter Veltliner and Frühroter Veltliner.  In the early 1990's, genetic testing was carried out and the results showed that Grüner Veltliner is not related to either of the other two grapes at all (though Frühroter Veltliner is the offspring of Roter Veltliner and Sylvaner).  The testing did identify one of the parents of Gruner Veltliner to be Traminer (or Savagnin, which we'll get to on this site very soon) but the other parent was unknown.

In the year 2000, a single very old, very weak vine was discovered in an abandoned pasture in a place called St. Georgen in Austria.  The grape was previously unknown and so was provisionally named St. Georgen-Rebe.  When the land was about to be reclaimed and the vine was being threatened with uprooting in 2005, scientists took some cuttings and some genetic material from the plant and ran some tests.  When the tests came back, it was discovered that this was the other parent of Grüner Veltliner.  It is believed that this was the last surviving St. Georgen-Rebe vine on earth and it was on the verge of dying prior to discovery.  There are currently plans for experimental plots of the rediscovered vine to see what kind of grapes and wine it can produce.  It's pretty amazing, though, how close the world came to never knowing the full parentage of Grüner Veltliner and it certainly makes one wonder about the thousands of vines that have passed into obscurity due to neglect, vine-pulling and/or selective breeding.

In any case, though the vine seems to be native to Austria and is certainly best known in the wines that come from Austria, it is not solely an Austrian phenomenon.  Grüner is the most widely planted grape in Slovakia and the second most widely planted grape in the Czech Republic.  It is found to a lesser extent in Germany and Hungary and is being played around with in the new world throughout the USA and in some parts of New Zealand.

The overwhelming majority of Grüner Veltliner wines produced are still wines, but Ewald Gruber (producer of the sparkling Zweigelt mentioned here) makes a slightly fizzy version.  I was able to pick up a bottle of this from my friends at Bin Ends on sale for about $10 (it's a NV bottling).  In the glass, the wine was a silvery lemon color with slight effervescence.  The nose here was surprisingly shy for a sparkler with just a hint of apple-y fruit, but it was mostly just a blank.  On the palate, the wine was light bodied with acidity on the higher side of medium.  Like its Zweigelt counterpart, this was definitely more frizzante than fully sparkling and tasted pretty dry, though the winery spec-sheet indicates that there is a whopping 15 grams per liter of residual sugar here.   There were nice flavors of crisp apple and pear with just a little of the white pepper and vegetal matter that makes Grüner so distinctive.  This is almost certainly tank fermented rather than bottle fermented as it's very fruit-forward and friendly (it's also under screwcap for those who are concerned about those kinds of things).  It's an interesting change of pace for a sparkler and an interesting take on the Grüner Veltliner grape. 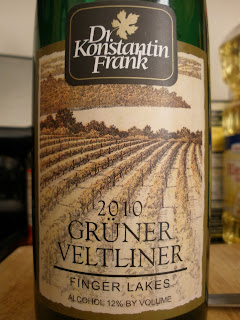 While recently visiting the Finger Lakes, I remarked to my wife about halfway through the trip that I was surprised that we weren't seeing more Grüner Veltliner out that way.  The very next day we ended up at Dr. Frank's where we were able to try and purchase ($20) the winery's first ever bottling of Grüner Veltliner.  In the glass, the wine had a pale greenish lemon color.  The nose was very aromatic with ripe apples and stone fruit.  At the winery, this has a very distinct celery leaf kind of character to it that wasn't as prominent at home.  On the palate, the wine was on the lighter side of medium with medium acidity.  There was apple and grapefruit flavors along with a bit of pepper in the finish and very nice minerality.  I started to pick up the celery and celery leaf characteristics as the wine opened up a bit and, while that may not sound very appealing in a white wine, it works really well with Grüner.  I drank this wine with a crudites platter and it is a total slam dunk with a lot of vegetable dishes.  It's an exciting wine not just because of the quality but also because it shows the region's potential for this grape.  I don't think Grüner is going to unseat Riesling as the star of the Finger Lakes region, but it's a nice addition to their repertoire and shows the potential for some very interesting wines in the future.
Posted by Unknown at 3:51 PM

we did a comparison of GV sparkling wines last year. Might interest you (in German though)
http://blog.burg.cx/2010/sektverkostung-gruener-veltliner-ergebnis/