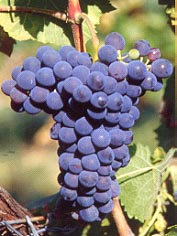 Sorry for the lack of posting over the past week or so, but I've been on vacation in the Finger Lakes region of New York state and didn't have internet access while I was away.  I picked up some very interesting bottles there which will eventually find their way here, but for now, we're taking yet another trip into Italy to discuss the Cesanese grape.

There are two distinct clones of Cesanese.  Cesanese Comune is the most common and is distinguished by its larger berry size and its relative hardiness compared to Cesanese d'Affile which is the more prized of the two.  Cesanese d'Affile is used in the production of DOC wines from Olevano and Affile as well as the DOCG wines from Piglio.  Piglio was granted DOCG status in 2008 and it was, somewhat surprisingly, the first DOCG region in Lazio, which is essentially the grape's exclusive home, though a few plantings have managed to sneak northward into southern Tuscany.

The grape is thought to be native to Lazio and may have roots here as far back as ancient Roman times.  As far as I can tell, the grape was not mentioned specifically by the name "Cesanese" by the Romans, but it may have been mentioned in a roundabout way by Pliny in one of his works.  Its more recent history is decidedly racier as Cesanese was chosen by porn star Savanna Samson to be the lead grape in her winemaking venture Sogno Ono (which, fortunately, means "Dream One" and is not some kind of lewd Italian phrase).  Cesanese accounts for 70% of the blend of her wine, and none other than Robert Parker gave the debut effort (the 2004 bottling) from the winery 91 points, though it should be noted that he did not taste the wine blind (he had it in a Parisian bistro according to the New York Times).  In case you don't feel like perusing the article, the hands-down winner for best quote is: "Ms. Oliveros said that her chief talent is her passion for her work. She said she genuinely enjoys having sex with strangers...'for those few minutes that I'm working with someone, I love that person,' she said. 'For that reason it makes me good at what I do.'"

Ahem.  So, back to Cesanese, shall we?  The wine is question today is a Cesanese del Piglio from 2005, which pre-dates the new DOCG law.  The Piglio region is just south of center of Lazio (itself located immediately south of Tuscany) and is almost right on the border with Abruzzo.  The area is somewhat hilly and is difficult to farm as a result of the terrain.  Cesanese is grown on fewer than 1000 hectares (2500 acres) across all of Italy, though I wasn't able to find a specific figure for the commune of Piglio.  Dry wines made from Cesanese are a relatively recent phenomenon as, traditionally, the grapes were made into sweet still or frizzante wines.  The first taste I ever had of Cesanese was in a 70/30 blend of Cabernet Sauvignon and Cesanese from Cantina Gabriele that was called "Dolcemente."  The wine was enjoyable, but since Cesanese made up such a small proportion of the blend and since most of what I tasted was almost certainly from the Cabernet, I never did anything with my notes on the wine (for those deeply interested, my final thought was: "pleasant, but not sure how versatile it would be...not enough sugar for dessert and not enough structure for meats and cheeses"). 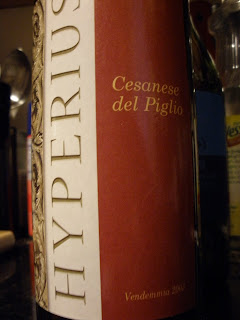 The first varietally bottled Cesanese I ever saw I let get away from me and it took me almost six months of searching to find another in the Boston area.  I was finally able to track down the 2005 Hyperius Cesanese del Piglio at Federal Wine and Spirits for around $18.  In the glass, the wine had a medium ruby color and a moderately open nose with aromas of spicy black plum, black cherries and cloves.  The wine was medium bodied with high acid and no tannin.  There were a lot of baking spice notes (cloves and allspice in particular) to go with the dark, plummy, black cherry fruit.  The fruit was dark but the acidity gave it a bright, juicy taste.  As it opened up it started to pick up some raisin and prune flavors, which were not at all unwelcome.  Six years is a lot of age for a Cesanese, but the wine was very enjoyable and easy to drink.  Conventional wisdom says that these should be enjoyed as young as possible, so I would definitely like to get my hands on a younger one, but I'm not exactly holding my breath. If you like lighter red wines, you should definitely give Cesanese a shot and if you like lighter red wines and porn, well, you may have just hit the jackpot.
Posted by Unknown at 12:49 PM

Cesanese is one of my favorite red grapes. We import on the west coast from a producer who provides a very finely structured version. I recently had a 2003 that was still very much alive. Thanks for spreading the Cesanese word!