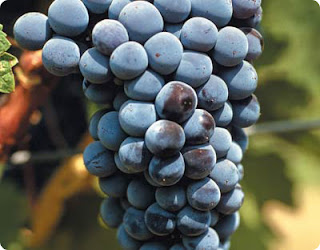 It isn't often that you can trace the emergence of a grape and a style of wine to a particular winery or even a particular year, but with Mavrodaphne, we can do just that.  In 1859, a Bavarian gentleman by the name of Gustav Clauss bought some land in Achaia, in the neighborhood of Riganokampos near the city of Patras.  Patras, as we learned when we took a look at the Roditis grape, is located at the very top of the Peloponnese Peninsula in Greece (map).  Gustav was initially interested in growing blackcurrants, but he planted a few vines on his 60 acre spread as well.  In 1861, he founded the Achaia Clauss winery on his property and began making wines from the local Mavrodaphne grape.

There is a story that says that Gustav named his wines after a girlfriend or lover he had named Daphne, but there are indications that they grape was grown in this area prior to Clauss's arrival (some sources say he brought the grape from one of the many nearby islands, but that doesn't seem to be quite right either).  Prior to Clauss's arrival, most of the wines made from the grape in the area were regular table wines that were a little bit sweet, but Clauss decided to use some of the techniques used in Port production to create a different kind of wine.  He stopped fermentation short by introducing neutral grain spirits, which allowed the wine to retain more of its natural sugar while boosting the alcohol level.  He then put the sweet fortified wines in open oak barrels and aged them for several years.  Prior to the mid 20th Century, the wines were aged in casks outdoors for six years, but today they're aged indoors for around eight years (though some of the higher end bottlings are aged for many decades).  The Achaia Clauss winery pioneered this style of Mavrodaphne and they are still selling their version of it today, though they're not the only game in town anymore by any stretch of the imagination.  Mavrodaphne is increasingly made into still, dry table wines, but these are still in a distinct minority and are very difficult to find.

There are a handful of grapes throughout Greece either with the word mavro in their name (see Mavrotragano and Xinomavro for two we've covered here) or which are known simply as Mavro, and some have thought that these grapes may be related.  As far as I know, no relationship has been found between these grapes, which makes sense when you recall that mavro is just the Greek word for "black," and is used in much the same way as noir or nero in France or Italy (the daphne part of the name just means "laurel"*).  It is a thick-skinned grape that grows in fairly loose bunches and can suffer badly from overproduction, so yields must be kept in check to prevent thin, diluted wines.  The vine is highly susceptible to both drought conditions and some forms of mildew, so the water given to and around the vines must be carefully monitored.

There are at least two clonal variants of Mavrotragano discussed in Konstantinos Lazarakis' The Wines of Greece.  The more common one, which is grown mainly in the area of Achaia, is known as Regnio, and is distinguished by its tighter bunch formations and different leaf shape.  The other clone is known as Tsigelo and it is characterized by its smaller bunches and, some say, higher quality wines.  Mavrodaphne is grown mostly in the area around Patras, but there is also some grown on the island of Cephalonia where it is made into a similar style of wine.  The Cephalonians claim that they use a superior clone of Mavrodaphne, but it looks like their clone is very closely related to Tsigelo.  There is also a Cephalonian grape called Thiniatiko, which may be the same as the Tsigelo clone of Mavrodaphne, or which may only be closely related. 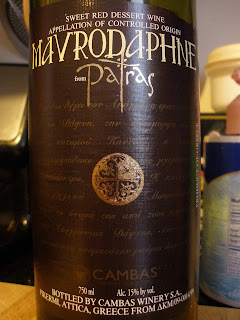 I was able to try two different Mavrodaphne wines.  Both of them were from Patras, both were in this sweet fortified style, and I picked up both of them from Wollaston Wine and Spirits.  The first wine was the NV Mavrodaphne from Cambas winery, which cost around $11.  In the glass, the wine was a fairly light tawny purple color.  The nose was moderately intense with raisin and prune fruits along with a bit of dusty leather.  On the palate, the wine was on the fuller side of medium with fairly high acidity.  It was pretty sweet with flavors of raisin, fig, chocolate, burnt sugar, molasses, dulche de leche, dried cranberries and prunes, which is an awful lot to have going on for only $11.  The wine is 15% alcohol, but it carries it well and doesn't come across hot at all.  I kept the bottle on my counter with only a cork on the top of it for a few weeks, and it was drinking consistently well throughout that time period.  It's kind of like a slightly oxidized ruby port, but at a much nicer price point.  I enjoyed it so much, I actually went back to the store so that I could try the other Mavrodaphne wine that they had in stock. 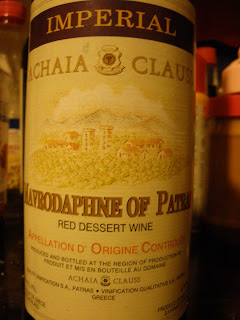 That wine was the NV Achaia Clauss "Imperial," which also had a retail price of $11.  For some reason, Achaia Clauss doesn't have this wine listed on their website, but I was surprised to see that in their higher end Mavrodaphne wines, there is actually a very high percentage of a grape called Black Corinthian.  Markus over at the always excellent Elloinos explains that the regulations for Mavrodaphne of Patras allow for up to 49% (!) of Black Corinthian.  Achaia Clauss actually does use the entire 49% in the wine that's one step up from this one (the "601") on their quality ladder, so I'm guessing the percentage is similarly high here.  In the glass, this wine was a fairly deep brownish-tawny color.  The nose was powerfully intense with aromas of raisin, prune, fig, baking spice, caramel and scorched brown sugar.  On the palate the wine was on the fuller side of medium with fairly high acidity.  Again, it was sweet with flavors of raisin, prune, fig, burnt sugar, smoke, brown sugar, caramel, baking spice and even some black pepper.  This wine was also 15% alcohol, but seemed to be wearing it a little more clumsily.  It was still a phenomenally deep and complex wine, though, that really over delivered on its meager price tag.  This also sat around on my counter top for a few weeks without suffering for it at all.  It threw a pretty heavy sediment, which surprised me a little, but isn't something that I have any kind of problem with.  I preferred it to the Cambas Mavrodaphne, but wouldn't hesitate to recommend either one of them

Much of the information in this post is from:

*The myth goes that there was once a wood nymph named Daphne who never wanted to get married, like the goddess Diana.  One day, Apollo saw her and fell in love with her and began to pursue her through the forest for his own amorous ends.  Daphne called out to her father for help and, knowing that he could not stop Apollo directly, he turned her into a laurel bush.  Apollo was a freaky guy, but apparently not freaky enough to get it on with a bush, so he moved along and that's supposedly how the laurel bush got its name.
Posted by Unknown at 2:16 PM

I too have had the Cambas Mavrodaphne before. Frankly, I really enjoy dessert wines and feel that they deliver the most complexity for my dollar. Would enjoy seeing more of them, permitting they meet Fringe Wine's exotic criteria :)