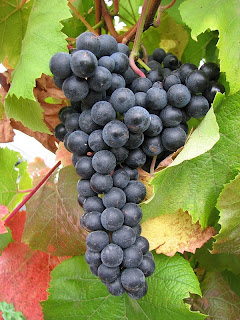 Today's post will be short and sweet because, well, there just isn't a whole lot to say about today's grape.  It's called Noiret and it was released to the public for cultivation only in 2006.  It was created and tested by two Cornell professors named Bruce Reisch and Thomas Henick-Kling at Cornell's New York State Agricultural Experiment Station in Geneva, N.Y.  The original cross (between Steuben and NY65.0467.08) was made in 1973 and first planted in 1975.  They started testing the grape for its winemaking abilities back in 1980 but final approval for commercial sale didn't happen until 2006.  I don't think that the process for all hybrids and crosses takes quite that much time in general, but that does give you some idea of how arduous a task it can be to create new species of grapes.

The grape's family tree is unbelievably complex, but it is also more or less fully mapped out here.  There are a number of familiar faces there as well as a lot of strings of numbers that probably won't mean anything to you unless you are yourself a grape breeder.  They are basically grapes that have been bred at a breeding station but have not been released commercially.  They have various characteristics that are useful for breeding, such as particular disease resistances or weather hardiness, but also have some other flaw that would prohibit their planting on a commercial scale.  Noiret looks to have a very interesting mix of vinifera grapes, hybrid grapes and breeding specimens throughout its family tree.

Like most grapes that are bred at these breeding stations, Noiret was specially bred to have certain characteristics.  It was certainly bred to have some degree of cold hardiness, and it is considered moderately hardy (meaning that the vines will likely survive in conditions between -5 and -15 degrees Fahrenheit).  The only major disease problem listed for Noiret is a moderate susceptibility to downy mildew of the fruit and leaves, meaning that the grower would need to take care in conditions that are conducive to the spread of those fungi.  It has a fairly late bud-break which means that spring frosts aren't really a concern.  The big selling points for the grape are that it is able to impart a deep color to its wines and, best of all, it doesn't have any of the foxiness that can plague some hybrids. 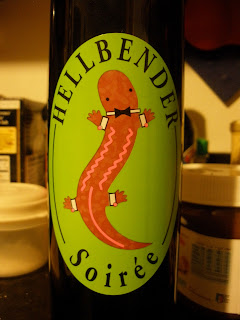 There are some table wines being made from the Noiret grape, but when I was in the Finger Lakes region a few months ago, the only wine I was able to find was a Port-style wine from Red Newt Winery on Seneca Lake.  It's from the 2007 vintage, which I guess either means that they are using very young Noiret grapes for this wine or they have access to vines that may have been planted prior to 2006.  In any case, the blend is 73% Noiret, 20% Syrah and 7% Cabernet Franc and a 500 mL bottle set me back about $24 at the winery.  In the glass the wine was a deep purple ruby color with a very narrow purple rim.  The nose was moderately aromatic with raspberry and blackberry fruits, both fresh and dried, along with some chocolate and raspberry liqueur.  On the palate the wine was medium bodied with fairly high acidity, no tannins, a touch of sweetness and an obviously high alcohol content.  There were flavors of cocoa powder, dried blackberry and black cherry, stewed raspberries, espresso and bittersweet chocolate.  There was also a very distinctive raspberry liqueur flavor that was really dominating the palate.  I found the alcohol a little awkward, mostly because the body really wasn't fleshy enough to prop up the Port alcohol levels.  Overall I found it very enjoyable, though, and enjoyed my bottle with some homemade chocolate-raspberry clafoutis, which it turned out was an excellent pairing.  I hope to be able to track down a table wine made from the grape before too long and will report back when I'm able.
Posted by Unknown at 3:59 PM

Chek out arbor hill winery in s. Bristol ny they have noiret. If you go there, get a boltte if the Ionia blush too. It is one of the parents of moore's diamond. Sweet labrusca. Arbor hill is likey the only winery selling Iona variety wine.

Think I had noIret from honeymoon trail winery located on the escarpment Ava, but I do not see it on their web site, may have been the carro noir.

Hello! Nickle Creek Vineyard in Foster, RI has this grape in production and is producing a complex dry red wine called Foster red. Like other posts it has some interesting notes of blackberry, toffee jammy flavors. Fortunately I have a local red wine with a lot of character not limited to meager offerings of Cab Franc or St. Croix found predominately in Southern New England!