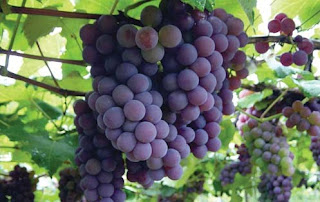 Italy has proven to be very fertile ground for this blog. Sure, most Italian wines you find in your local shop or at your local supermarket probably feature Sangiovese or Nebbiolo or one of the "international" varietals, but if you do a little digging, you'll start to find that there is a staggering range of wines coming from areas of Italy outside of Tuscany and Piemonte. There are an estimated 800 distinct grape varieties found in Italy, half of which have been authorized for planting by Italy's Ministry of Agriculture and Forestry. 400 grape varieties authorized for use in Italy, with another 400 possibly sneaking in in some blends. Most of those grapes are grown only in a very small region of Italy and nowhere else in the world (much like Sagrantino and the small Umbrian village of Montefalco). I could have focused this blog exclusively on Italian wines and probably had enough to material to last a few years.

Today's grape is Lacrima, or, more specifically, Lacrima di Morro. There is also a grape called Lacrima Nera, which is better known as Gaglioppo, and there is a white wine made in southern Italy called Lacryma Christi del Vesuvio which will be reviewed in a separate post. I have read differing accounts of how the grape got its name. Some sources say it is because the shape of the grape clusters resemble tears (Lacrima is the Latin word for "tears"), but I'm not sure I buy that. All of the pictures of Lacrima grapes I've seen look very similar to any other grape cluster. Joseph Bastianich and David Lynch, in their Vino Italiano, give a more plausible explanation. They say that the grape's skin has a tendency to rupture easily which causes juice to weep out of the grapes and onto the bunch.

In any case, Lacrima di Morro is grown in the Marche region of Italy. The Marche is on the eastern coast of Italy, immediately east of Umbria and between Emilia-Romagna and Abruzzo going from north to south. Morro d'Alba is the name of the village where Lacrima is grown, and it is just due west of the port city of Ancona. The region is perhaps best known for its white wines made from the Verdicchio grape, though there are also red wines made from the ubiquitous Sangiovese and Montepulciano. The DOC regulations stipulate that up to 20% of the blend for Lacrima di Morro d'Alba can be made up of Montepulciano or Verdicchio grapes, though most producers make 100% varietal wines. During the wine making process, dried grapes are added after the first racking in a fashion similar to the ripasso wines made in Valpolicella. 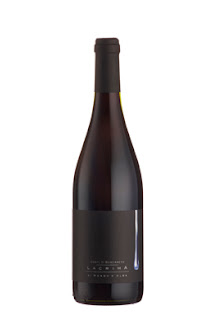 I recently picked up a bottle of the 2007 Conti di Buscareto Lacrima from Bin Ends for about $15. The wine has a dark, opaque center that is bright purple at the rim. It is inky and intensely saturated. On the nose, it smelled like roses...like a huge room full of roses...like a rose garden hermetically sealed in a room with rose potpourri. There was also some boysenberry jam fruit, but the overwhelming sensation was floral. The wine is full bodied with kind of a thick texture, nice acid and firm but soft tannins. Right out of the bottle, it tasted kind of hollow...all structure with no fruit. After I let it breathe for a bit, though, it filled out. A cautionary tale lurks here: don't rush to judgment about wine after your first few minutes with it; give it some time to fully express itself. There were lots of purple fruits and flowers and not much else. I have in my notes that it tastes like a rosebud dipped in boysenberry jam. Even a few weeks removed from having tasted this wine, all I can really remember about it was the overwhelming sensation of roses. If you're a fan of flowery smells and flavors in your wine, Lacrima may be your new favorite thing. While I found it interesting and enjoyable at times, it was a bit too one-dimensional for my taste and definitely started to wear out its welcome somewhere in the second glass. I have a very hard time trying to think about what kind of food this might go with. Maybe something that smells awful so you can at least use your glass as a kind of air freshener? It would be a good Valentine's Day wine for people that really love roses, I suppose, so maybe chocolate might be interesting here. If anyone has any favorite pairing with this wine, please let me know, as I'd be very curious to hear how this wine worked with different foods. 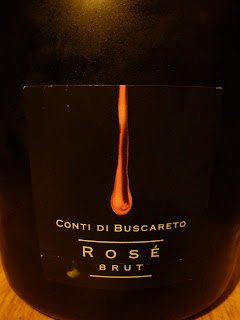 I was able to find a bottle of sparkling Lacrima, and have recently had a chance to try it.  I picked up a bottle of the NV Conti di Buscareto Rosé Brut from my friends at Curtis Liquors for about $23.  The wine is 100% Lacrima Nera from the same producer and vineyards as the bottling above.  In the glass, the wine was a pale salmon pink color.  The nose was nicely aromatic with candied strawberry and red berry fruits with a bit of bread dough and toast and just a touch of something floral.  On the palate, the wine was light bodied with high acidty and creamy bubbles.  There were flavors of strawberries and red berry fruit with pastry crust and yeasty bread dough.  It was pretty typical for a traditional method sparkler, but had nice, accessible fruit flavors to go along with the bready, yeasty secondary flavor and aroma characteristics of most sparklers. It wasn't as aggressively floral as the red table wine was, which was really to its benefit here.  It also came in a really cool tear-drop shaped bottle which was visually very appealing.  For only $23, this was a very good value sparkling wine that would match up with any number of foods.  I had it with a seared duck breast and the acid and fruit were very good foils for the richness of the duck.  Those looking for a fun and unusual New Year's Eve sparkler will find a lot to like here as well.
Posted by Unknown at 10:37 AM

I had a glass of Lacrima di Morro at a restaurant yesterday and it matched your description quite well. I was drinking it with some beef cheeks that had been done with spices similar to corned beef. I know it seems a bit strange, but it was actually a fabulous match. Spices in the meat and the wine complemented each other beautifully and the wine dealt with the fat in the meat handsomely.

may be one of the best grape and wine around, not very known...better like that

No need to spread the news. The last thing we need is for this wine to become a snob wine. The production is low as it is, if the snobs catch on the price will start to climb.

I had a Velenosi Lacrima Di Morro and it was bursting with violets. Certainly a floral impact in the mid-palate. A very pleasant wine with unique taste profile. Don't get caught up in finding the perfect match. Just enjoy the truly unique aroma/taste and match it with whatever you are serving. At $19 here in Nashville you can't do much better.

Just tried a Lacrima di Morro d'Alba from Accattoli this week. Major rose nose, and I thought it was the perfect wine for my spring dinner for next year, which features dishes made with, among other things, roses.

Just opened the 2008 Lucchetti Gardengo Lacrima di Morro d'Alba and it is glorious. The rose scent already noted is muted in this bottling, but it's there and I really love it. The wine is truly unique, and has great acidity, which will stand up to all sorts of foods-beef or even a mild cheese plate. Your boysenberry descriptor is on the money, and I get a bit of raspberry and firm tannin as well. No fruit bomb-y or syrupy stuff going on. Interesting to imagine how it will evolve in the years to come. I paid less than $20 for this bottle, and I'd recommend it to all looking for an antidote to the mass-produced reds we often find at this price level. Go Langhe! Go Mario Lucchetti!