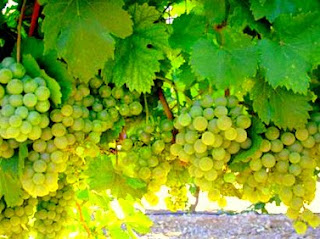 Many readers may be surprised to learn that Spain actually is the world leader in vineyard acreage (as of 2008), leading second place France by almost 750,000 acres. Surprisingly, Spain is a very distant third as far as volume of wine produced, trailing world leader Italy by almost 15 million hectoliters. Why the discrepancy? Well, Spain is very hot and very dry (excepting the northwest Galician corner, which will be the subject of a separate post). Because of these conditions, vines are planted much farther apart in many regions of Spain than in the rest of the world. Vines need the extra space so they won't be competing with one another for the meager water supplies. The extra spacing also allows air to circulate, keeping the vines from overheating. The result is that Spain has a lot of land dedicated to vineyards, but that land is more sparsely planted, resulting in lower yields and lower overall production numbers.

Right in the middle of Spain is a region called La Mancha, perhaps best known for being the home of Don Quixote. La Mancha is a large plateau with an elevation of about 2000 ft., which also helps keep the temperatures more manageable, though it is still very hot and dry in the summer. Aside from being home to Don Quixote, La Mancha is the world's largest continuous vine-growing region in the world. They have 190,000 hectares of land devoted to viticulture, which would be enough to put the region 22nd in world production were it a separate country. La Mancha produces more wine than the entire continent of Australia. Most of the production was from the Airen grape which, as a result of the expansive planting in Spain, was (and possibly still is) the world's most planted white grape variety.

For many years, this region was the wine lake of Spain, producing a great deal of bulk and low-quality wine (think of the Central Valley in California or the Languedoc in France). In recent years, though, a few quality oriented producers have stepped up and are making a commitment to produce fine wine in this region (again, similar to what has been happening in the Languedoc recently). One of those producers is Paso a Paso. In addition to the Verdejo that I

tried, they also produce a bottling of Spain's most famous red grape, Tempranillo which, while I have tasted and can recommend it, I will not be going into any detail about here.

Verdejo is perhaps most well-known, if it can be considered well-known at all, in Rueda, a small region north of La Mancha and the city of Madrid and just west of the Ribera del Duero. It's actually pretty difficult to find a description of Verdejo that doesn't immediately mention Rueda. Verdejo is native to Rueda and is not planted very extensively in other regions. Jancis Robinson, in her Vines, Grapes and Wines has this to say about Verdejo: "Of all the white varieties among Spain's official top twenty, Verdejo is probably the one with the most discernibly aristocratic character." As a casual Marxist, that kind of description makes me grit my teeth a bit, but I dove in to see what Verdejo is all about.

I picked my bottle up at the aforementioned Gypsy Kitchen in Quincy, MA for $14. My bottle was the 2009 vintage (I wouldn't swear to it, but I'd guess that vintage to vintage variation is pretty small here). In the glass it had a pale straw color and was brilliantly limpid and clear. The nose was exuberant with strong aromas of ripe pears, peachy stone fruit, grapefruit, ripe apples and flowers. The wine is dry and full-bodied on the palate with a rich mouth-feel and medium acid. Apricots and grapefruit peel were the dominant flavors, with some creamy pear. There was a nice minerality to the clean, crisp finish. I would say this wine tastes like a mix of viognier and riesling with the stone fruit and flowers of the former mixed with the citrus and acid of the latter. It's an outstanding wine for $14 that I was happy to drink on its own, but which also has a wide variety of possible food combinations (roasted chicken or Thanksgiving turkey spring immediately to mind as excellent matches). Aristocratic wasn't the first thing that sprang to my mind when considering this wine, but it was warm, friendly and attractive, three characteristics I'd much rather have in a companion than aristocracy.

Please see this more recent post for a tasting note of a Verdejo wine from the Rueda region of Spain.
Posted by Unknown at 2:39 PM

Your explanation for the distance between vines is very interesting.

We featured a Verdejo as the white selection of our highest series back in ’09 called “Marques de Irun”—straw in the glass with hints of pineapple, some apricot, and a fleshiness to it, almost as if it had had some skin contact.

What's interesting to me (although it makes sense) is that Verdejo is an ancestor to Riesling, giving it that Riesling-like quality in both the nose and palate.