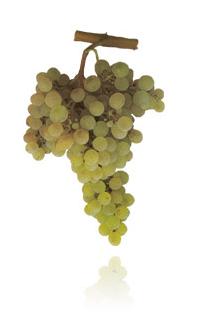 Sorting out the different grapes of Portugal is something of a nightmare.  To be as small as it is, Portugal probably causes me more headaches and more confusion than any other wine region.  For some reason, nearly every grape grown in Portugal has a ton of synonyms and the primary name for the grape changes from region to region within the country.  Further, as you might expect given their geographical proximity, there are a lot of grapes that are common to both Spain and Portugal, but pretty much none of them go by the same name in each country.  Some of them are pretty easy to spot and sort out (like Albariño and Alvarinho), but for others, there's no way you could guess that the grapes were identical.  Take the case of Tempranillo.  In Portugal, Tempranillo is typically called Aragonez or Tinta Roriz, while in Spain, it is mostly called Tempranillo but is also known variously as Cencibel, Tinta de Toro, and Tinto Fino.   All you can really do is try to memorize the synonyms yourself because, as you can see, there really isn't any kind of clue in the various names themselves that would let you know that you are dealing with a single grape.

That's a problem, but it's a problem that is much easier to sort out than the use of a single grape name as a synonym for a variety of different, unrelated grapes.  This is something like the Trebbiano problem in Italy where there are a handful of different grapes with the word Trebbiano in their name which, it turns out, aren't related to one another at all.  This is the kind of problem Arinto has in Portugal, and it caused me quite a bit of confusion before I was able to finally sort it all out.  When I bought the wine that I'll be writing about below, I looked it up in Wikipedia when I was in the store and read this sentence: "Arinto is a synonym of Malvasia Fina and Loureiro Blanco," which I interpreted to mean Arinto = Malvasia Fina = Loureiro Blanco.  Which, it turns out, isn't true at all.  What it means is that Malvasia Fina is known as Arinto in some places and Loureiro Blanco is known as Arinto in some places as well, but the names Malvasia Fina, Loureiro Blanco and Arinto refer to three distinct grape varieties which aren't related to one another (the Madeira grape Sercial is also sometimes called Arinto but isn't related to the other three grapes either).  Just to add a bit to the confusion, Tempranillo is also known in some parts of Portugal as Arinto Tinto, though, you guessed it, it isn't related to Arinto in any way.

Thinking I finally had it all straight, I went to the VIVC database today to see what information was in there about Arinto.  A search for "Arinto" brings up this page.  The "Prime Name" field is where you're supposed to look to find the grape you're looking for, as the "Cultivar name" field pulls up every occurrence of the search term as a synonym of other grapes.  As you can see from the list, there is no "Prime name" entry for Arinto though there are 29 entries in the "Cultivar name" column that have Arinto somewhere in them.  It turns out that Arinto is officially known as Arinto de Bucelas which, I'm guessing, is an effort to lessen confusion given the proliferation of the Arinto name and possibly to differentiate it from another grape called Arinto the Douro Valley which is now officially known as Arinto do Douro.  These two Arintos are not related but, and here's the really crazy thing, Arinto do Douro is an accepted synonym for Arinto de Bucelas.

Anyway, the grape we're here to talk about is Arinto de Bucelas which, as you might expect, is most commonly grown in the Bucelas region of Portugal.  Bucelas is located just north of the city of Lisbon which is within the Lisboa region (which was called Estremadura until 2009 when it was changed to avoid confusion with the Spanish region Extramadura) which is a thin strip of land on the western Coast of Portugal, almost right in the middle from north to south.  Grapes have likely been grown in this region since Roman times, though the style has changed throughout the years.  In the Elizabethan age, the wine was fortified and it is thought that a reference to a wine called Charneco in Shakespeare's Henry VI, Part 2 is a reference to Bucelas wine.  Thomas Jefferson was a fan of the lighter, unfortified wines from this region in the late 18th - early 19th centuries, as was Arthur Wellesley, the 1st Duke of Wellington, who made the wine fashionable in London where it was known as "Portuguese Hock" (Hock being an old British term for wines from Germany).  Because of this name it was suspected for many years that Arinto may be related to Riesling, but it turns out that it isn't.  In the studies that I've read, Arinto's closest relative is probably the Gouveio grape, which is called Godello in Spain (and is not to be confused with Verdelho, despite Wikipedia's efforts to lead you to believe otherwise).

Wines from Bucelas fell on hard times, though.  As the city of Lisbon and its surrounding areas grew, they overtook some of the vineyards from the region.  By the 1980's, Bucelas was a monopoly as all of the remaining vineyard land was owned by a single company who was making bad wine.  Things have changed for the better over the past decade or so as more quality-conscious producers have set about trying to revive the past glories of Bucelas wine. 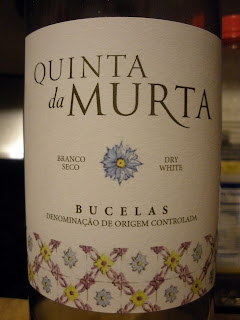 I was able to find a bottle of the 2009 Quinta da Murta Bucelas for about $9.  Wines from Bucelas must contain a minimum of 75% Arinto, but this wine is 100% (you can read the technical specs here).  In the glass the wine was a pale silvery lemon color with a greenish tint.  The nose was moderately aromatic with ripe pears, green melon, lemon peel and something faintly tropical that I wasn't able to put my finger on (banana was as close as I got).  On the palate the wine was on the lighter side of medium with fairly high, zippy kind of acidity, a hallmark of the grape.  There were flavors of lemony citrus and green apple with pineapple, lemon peel and something slightly herbal.  The wine was quite tart and was just screaming for some kind of food.  This would be great with raw oysters, grilled scallops or even chicken served in a creamy lemon sauce.  It's not a profound wine, but given the under $10 price tag, it's a pretty good deal.  I have a hard time finding wines I like to drink for under $10, but this one was satisfying and tasty.  They apparently make about 80,000 bottles of this stuff so if you run across it, give it a shot.
Posted by Unknown at 4:29 PM