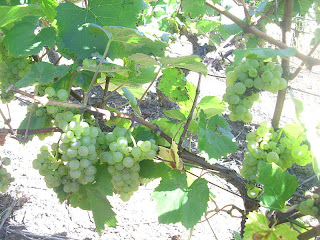 Burgundy is a land of favored sons and ugly step children, of superstars and also-rans.  There are four grapes that are grown within this area, but two of them get all of the acclaim.  For the red grapes, Pinot Noir is the unquestionable star to Gamay's second fiddle, while for the white grapes, Chardonnay is the golden boy to Aligoté's red-headed step-child.  Acclaim for Burgundian wines made from Pinot Noir or Chardonnay is widespread and the prices for the best of these wines often reach stratospheric levels.  The best wines made from Gamay or Aligoté, by contrast, are little commented on and generally will cost you less than $20.  The class distinction between the two groups is clear and almost universally recognized by critics and connoisseurs alike.

Of the two outcasts, Aligoté has it much worse than Gamay, though.  Wines made from the Gamay grape are much more widely available to consumers than wines made from Aligoté, and you are likely to find a bottle of Gamay everywhere from your local grocery store to your favorite specialty wine shop.  Furthermore, Gamay has been given its own sub-section within Burgundy, the Beaujolais region, where it is allowed to be king.  Aligoté is given only a single village, Bouzeron (in the Côte Chalonnaise), to be a star in and wines made anywhere else within the Burgundy region can carry the general Bourgogne Aligoté label only.  Since wines made from the Aligoté grape are not entitled to any AOC classification above the general Bourgogne Aligoté, those who do grow it tend to grow it on poorer sites, such as the valley floors or the tops of the hills, where the grapes are not able to ripen properly.  Since the AOC laws allow for so much more specificity in labeling wines made from Chardonnay grapes, and since specificity in Burgundy generally means  higher prices, it makes much more fiscal sense for the growers to give Chardonnay the prime spots and relegate Aligoté to the fringes.  As a result, the wines made from those Aligoté grapes can be good, but are rarely world-class, so the growers and officials feel justified in their assessment of Aligoté as a second class grape and nobody clamors to elevate its status within the region.  The Oxford Companion to Wine offers the opinion that if it were planted on the choicest sites in Burgundy, "Aligoté could produce fine dry whites with more nerve than most Chardonnays," but concludes that this isn't practical not only for the reason outlined above, but also because these days Chardonnay has more commercial clout than any other white grape by virtue of its name alone.

It's kind of interesting that Aligoté is primarily known for its second-class citizen status in Burgundy because its plantings within Burgundy account for only a tiny fraction of its plantings worldwide.  There are about 1700 hectares of Aligoté in Burgundy (compared to nearly 13,000 for Chardonnay), but worldwide there are over 45,000 hectares of land planted to the grape, making it the 22nd most planted grape in the world.  The overwhelming majority of this land is in eastern Europe, though, in places like Romania (which has over 6000 ha of land planted to Aligoté), Ukraine, Russia and Moldova.  Since we almost never see these wines on our shelves here in the States, we still tend to view Aligoté in the context of its role in Burgundy, where it is more prized as an ingredient in a Kir cocktail (together with creme de cassis) than as a white wine.

I used a couple of family metaphors above when describing how the four Burgundian grapes relate to one another, and there's a very good reason for that.  It turns out that all four grapes are related to one another in a very interesting way.  In 1999, a UC Davis research team published a paper that showed that Pinot and another grape called Gouais Blanc were the parents of an astonishing number of French grapes (Bowers, J., Boursiquot, J., This, P., Chu, K., Johansson, H., & Meredith, C. (1999). Historical Genetics: The Parentage of Chardonnay, Gamay, and Other Wine Grapes of Northeastern France. Science, 285(5433), 1562).  Among those offspring were Chardonnay, Gamay Noir and Aligoté, among a slew of others.  Meaning that those three grapes are essentially "siblings" with Pinot as the father (this study did the research to prove the mother-father relationship between the grapes).  Eagle eyed readers may note that I've only indicated Pinot as the father, rather than Pinot Noir, Blanc or Gris.  The reason is that the techniques used for these pedigree studies is unable to differentiate between clonal variants of a given cultivar.  When samples of Pinot Noir, Pinot Blanc and Pinot Gris are analyzed using this technique, they all come back as identical since the lighter berried grapes are merely skin color mutations of Pinot Noir.  These studies, then, cannot say conclusively that Pinot Noir was the father of these grapes, but since it has had the longest history within the region, there's every reason to think that it is. 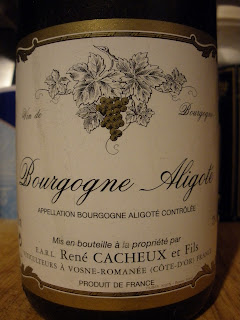 I was able to find and try three different wines made from the Aligoté grape.  The first was the 2009 René Cacheux et Fils Bourgogne Aligoté which I picked up for about $14.  In the glass the wine had a pale silvery lemon color.  The nose was moderately aromatic with green apple and lemon-lime citrus fruits with a kind of biscuitty, pie-dough sort of element to it.  On the palate the wine was medium bodied with fairly high acidity.  There were citrusy fruits (leaning slightly more towards lime than lemon) with creamy pear and that same biscuitty kind of flavor.  The wine finished with a nice clean, steely kind of minerality.  Of the three I tried, this was the most balanced.  Aligoté is a high-acid grape which can be difficult to tame if the fruit isn't entirely ripe.  This wine reigned the acid in nicely and had a nice core of simple fruit that was tasty and refreshing.  It's not the kind of wine that will change your life, but it is a very nice value wine at less than $15 per bottle.  I spotted this wine on the shelf at several different shops within the Boston area so it should be easily findable for those interested. 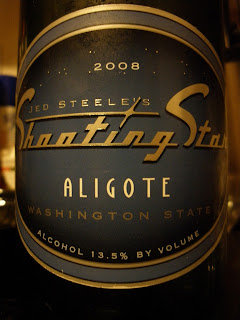 The second wine that I tried was the 2008 Jed Steele "Shooting Star" Aligoté, which is vinified in California from fruit grown in Washington state.  Retail on this bottle was also about $14.  In the glass the wine was a silvery lemon color.  The nose was nicely aromatic with lemon citrus and grapefruit along with a leesy, cheesy, buttermilk kind of aroma.  Oz Clarke, in his Grapes and Vines, does say that Aligoté can have a kind of buttermilk tang to it, and once you read that sentence, you'll swear you smell and taste it in almost every Aligoté you ever come across.  On the palate the wine was light bodied with screamingly high acidity.  There were lemon, green apple and under-ripe pineapple fruits with a touch of coconut with a sour, really funky cheesy aspect to it.  I have in my notes that this was "like battery acid and bad cheese," and even sitting here writing this note I'm wincing from the memory of this wine.  I do love high acid whites, but this was tooth-strippingly acidic with a bit too much funk for my tastes.  It was a struggle not only to finish the bottle, but even to finish each glass and is not the kind of thing I'd recommend to anyone. 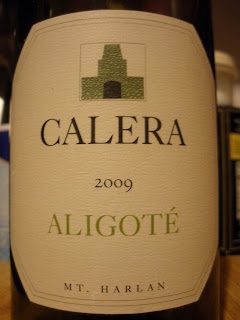 The third wine that I tried was from one of my favorite producers, Calera, located on Mt. Harlan in California.  Ever since I read the book The Heartbreak Grape, which profiles owner and winemaker Josh Jensen, I've been following this estate with great interest.  Their Pinot Noirs are fantastic and are among some of my all time favorite wines.  This Aligoté is made from estate fruit that is grown on only 3 acres of land.  The wine is aged for six months in older oak barrels and undergoes 100% malolactic fermentation.   They made only 116 cases of this wine in 2009, and I picked this bottle up from my friends at Curtis Liquors for about $23.  In the glass the wine had a lemon gold color with some greenish tints.  The nose was reserved with ripe apple and pineapple fruit and subtle leesy kind of aroma that smelled a little like buttermilk.  On the palate the wine was on the fuller side of medium with medium acidity.  There were flavors of ripe baked apples and creamy pear with some pastry dough and dairy-ish (buttermilk again?) notes as well.  This was a very good wine that I really enjoyed, but I would have liked to see a bit more acid in it.  In reviewing the 2010 batch of wines, Robert Parker remarked "Calera has once again made the finest Aligoté in America."  It's certainly the best American Aligoté that I've tasted, but for my money, the Burgundian example was the real winner, especially at almost $10 less than this example.  I did really like this wine, though, and have actually turned the label into a coaster for my end table at home.
Posted by Unknown at 4:31 PM

Thanks for writing this excellent post! It's very informative and makes me very curious. I've only had a French aligote before, and liked it a lot. Now I'm curious about the American wines.
[It's endlessly frustrating to me that it's difficult to get non-mainstream wines in Ontario (Can) unless you want to order in a specified bulk amount (a case, two cases, etc); I read your blog posts with a hint of envy.]

I love your blog, and am reading it from start to finish.

You probably know this, but there are some other grapes in Burgundy: César Noir, Tressot, Sacy, Melon, Sauvignons Blanc and Gris, and Pinots Blanc, Beurot and Gouges.