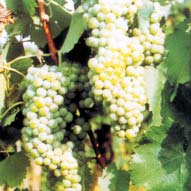 My first exposure to the Pignoletto grape was in the dimly lit tasting cellar at the Wine Bottega in the North End of Boston.  The Bottega had invited Alberto Tedeschi, a winemaker from Emilia-Romagna, to come over and present his wines, all of which are made from the Pignoletto grape.  It's not often that I am able to meet the person who makes the unusual wines that I buy, so this was a real treat.  I found the wines and the man very interesting and picked up a couple of bottles that we'll get to in a bit.  First, though, I'd like to take a closer look at Alberto's grape of choice, Pignoletto.

The Pignoletto grape is considered the "king of the Colli Bolognese wine zone," but few have heard of it outside of this region.  The grape is grown on over 17,000 acres of land in Italy, but it can be very difficult to find wines made from it here in the US, and in fact I've not been able to find another wine made from Pignoletto other than these Tedeschi bottles.  For some reason, wines from the Emilia-Romagna region within Italy, other than Lambrusco, can be difficult to find in general.  Today's post marks only the second time I've written about a wine from Emilia-Romagna (the first was Mostosa/Pagadebit), and I only have two or three more in my cellar that I hope to write about in future posts.  There are a lot of really cool grapes grown in Emilia-Romagna, but for some reason, few of them make it to us over here.

Unfortunately, information about the grapes from Emilia-Romagna is about as scarce as the wines themselves. Wikipedia has no entry for the grape and the Oxford Companion to Wine's entry reads in full "lively, crisp white grape grown around Bologna in northern Italy on an area totalling almost 7,000 ha/17,300 acres according to the 2000 vineyard census." What information I've found is scattered on various sites online.  Some of those sources indicate that Pignoletto is the same as the Grechetto grape grown primarily in Umbria, but I don't believe that's the case.  The VIVC does list Pignoletto as an accepted synonym for Grechetto, but it also has a separate listing for Pignoletto itself, so I believe that the Pignoletto grown in Emilia-Romagna is distinct from Grechetto.  The name Pignoletto probably comes from the word pigna, which means "pine cone" in Italian, which is the same root as the red Pignolo grape grown in Friulia, though the two grapes are not related.  In both cases, the name comes from the fact that the bunches of grapes produced by the vines resemble pine cones.  Some believe that the Pino Lieto referenced by the Roman writer Pliny is the same as the modern Pignoletto, but as we've found before, linking Roman grape names to modern grapes is a virtually impossible task.  The grape is unusual in that it has very thick skins which are very high in tannins so most white wines made from the grape are pressed very lightly and moved away from the skins as soon as possible in order to avoid too much tannic extraction into the wine. 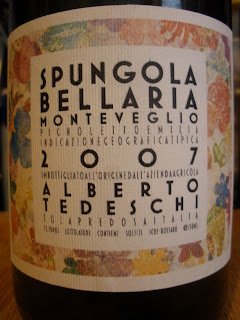 Alberto Tedeschi leases several small vineyard sites, a one hectare site called Spungola and another small site called Bellaria, that are devoted entirely to the Pignoletto grape.   He farms organically and does all of the vineyard work and cellar work himself.  He uses natural yeasts for his fermentations and doesn't fine or filter his wines.  The first wine of his that I tried was the 2007 "Spungola Bellaria," which is his still wine that is named for his two vineyard sites.  I picked this up from the Wine Bottega for about $20.  For this wine, Alberto presses the grapes very gently and leaves the juice outside overnight.  He then transfers the juice to stainless steel containers and allows the natural fermentation to occur over a 3-4 day span.  He then racks the fermented wine into neutral oak containers where the wine ages for at least 12 months on the lees.  In the glass, this wine was a deep bronze tinted gold color.  The nose was reserved with apple cider, pastry dough and toasted nut aromas.  On the palate the wine was on the fuller side of medium with  fairly high acidity and a surprising little bit of a tannic grip.  There were flavors of toasted nuts and golden apples with a cidery kind of character to it.  It wasn't oaky, but did taste kind of woody, like sawdust or like cracked pecan shells or something like that.  It was definitely a bit oxidized, though that's almost certainly by design.  It was a very unique wine that is definitely not for those looking for squeaky clean, fresh white wines.  Fans of the oxidized white wines of the Jura will find a lot to like here. 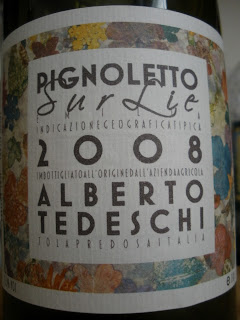 The second wine that I tried was the 2008 Pignoletto Sur Lie, which is a frizzante wine made from Pignoletto grapes, which I picked up from the Wine Bottega for about $25.  For this wine, Alberto ages the wine on its lees for at least a year in stainless steel containers.  He bottles this wine with a bit of unfermented must which he had kept refrigerated, and the sugar in the unfermented must causes a secondary fermentation in the bottle giving the wine its fizzy character.  In the glass, this wine was a deep golden bronze color with light fizz and some cloudy sediment floating around.  The nose was fairly aromatic with ripe cidery apples, apple peel, nuts and sweet yeast rolls.  On the palate the wine was medium bodied with medium acidity and light fizz.  There were flavors of toasted nuts, ripe apples and apple cider with a bit of a yeasty character to it.  It too is a bit oxidized, though not to the same degree as the still wine.  The wine needs to be carefully served as the cloudy sediment is bitter and the less of it that ends up your glass, the better.  It is a very unique wine that is difficult to compare to anything else I've had.  Tedeschi only farms about 2.5 hectares of land in total so the quantities for these wines are limited, but they're distinctive and interesting enough that I'd definitely recommend more adventurous wine drinkers seek them out.  Even if you've had wines made from the Pignoletto grape before, you've probably not had one quite like either of these two.

**UPDATE** I recently was able to try a more traditional wine from the Pignoletto grape and my tasting note can be found in this post.
Posted by Unknown at 3:29 PM

Hi Rob, I'd like to contribute to your research into Pignoletto, that I found in my old vineyard in Tuscany Maremma (Italy) and locally known as Grechetto. In fact Pignoletto is a synonimous of Grechetto di Todi, which is a different variety from Grechetto di Orvieto. In VIVC the variety number for Pignoletto and Grechetto di Todi is 9254, the same for both. I really appreciate your posts, detailed, passionate and well written. Best wishes, Enrico

Thanks for your comment. I wasn't aware that Pignoletto was also known as Grechetto di Todi. Do you know if there's some purported link to Greece in the grape's past?

I recently picked up a more traditional white wine made from Pignoletto grapes that I hope to put tasting notes up for soon. The Tedeschi wines are good and very interesting, but are hardly typical for the variety, I think, so I'm curious to see the differences with this other bottle.

The list of varieties grown in Italy named "greco, grechetto, grecanico..." is large but as far as I know none of these has real greek origins.