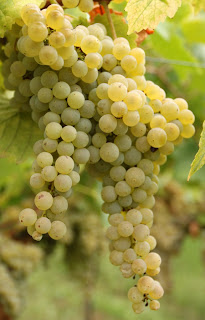 Confusion is usually the first thing that people experience when confronted with the Pecorino grape for the first time.  "Isn't Pecorino the name of a cheese?" many ask, and, of course, they're right.  Pecorino Romano is the name of a famous sheep's milk cheese made in the Latium and Sardinia regions of Italy, while the Pecorino we're concerned with here is a grape grown on the other side of the Italian peninsula in the Marche and Abruzzo regions.  One might be inclined to wonder if the grape and the cheese had something in common given their identical names and the answer is, kind of.  Both are derived from the same word, pecora, which means "sheep" in Italian.  Pecorino Romano (and Pecorino Toscana and Pecorino Sardo) is so named because it is a sheep's milk cheese.  The Pecorino grape is so named not because of any kind of direct link to sheep, but because it is said that sheep particularly enjoyed eating the grapes while they were being driven through vineyards from pasture to pasture.

Whether the story of the grape's name is true or not isn't really all that important, but it does give us some idea of how long the Pecorino grape has been around.  Sheep herding is something that is still done, but the kind of pastoral imagery that a story like that conjures up definitely makes me think of a much more distant past.  And while it is true that the grape itself is thought to be very old, wines made from the Pecorino grape date only to about the 1990's.  The story is shockingly similar to the story of the Pugnitello grape from Tuscany, with a slight twist.  While Pugnitello was found just growing in a field somewhere, Pecorino had a bibliographic history that dated back to at least 1871 and so it was known to researchers, but it was feared to be extinct.  Like so many grapes that have teetered on the precipice of extinction, Pecorino is a somewhat stingy yielder and over time many growers abandoned it in favor of more prolific vines like Trebbiano.  Growers make money on volume and Pecorino just wasn't able to sufficiently deliver.

In the early 1980's, a man named Guido Cocci Grifoni was doing research on native grape varieties on the eastern coast of Italy within the Marche region.  Like the researchers in Tuscany who discovered Pugnitello, part of his research was devoted to trying to save heirloom varieties from extinction, but he was also looking for more characterful grapes to make wine from than the local Trebbiano and Malvasia clones.  Rather than starting out by combing the fields, Grifoni and his team started going through the written records for the region and in the course of their research, they discovered the presence of a tiny vineyard on the right bank of the river Tronto which was located 1000 meters above sea level and was owned by an 80 year old man named Mr. Cafani.  Mr. Cafani's vineyard was purported to have a few struggling vines of the old Pecorino variety and when they visited the site in 1982, they took some of these cuttings home with them.

Grifoni grafted the vines onto modern rootstocks and began trying to grow the Pecorino grape in earnest.  The vines didn't give any substantial harvests until the early 1990's, and when they finally started producing usable grapes, Grifoni began experimenting with making wine from those grapes.  Encouraged by his early results, he planted more and more land to Pecorino.  Eventually he was making enough wine to sell, which he began doing in the early 1990's.  Since Pecorino was not an approved grape variety at that time, the first commercial wines featuring the Pecorino grape were sold as vino de tavola, which does not allow any vintage information, grape information or regional information on the front or back labels.  Grifoni campaigned for official recognition and received it in 2001 as Pecorino was finally allowed into the Offida DOC zone, where wines carrying the Offida Pecorino DOC designation must contain at least 85% Pecorino grapes.

Pecorino has roared back from the brink of extinction and is now grown not only in the Marche and Abruzzo, but also in Umbria and Lazio to the west.  It is a fairly thin-skinned grape that performs best at a slight altitude.  The grapes can be naturally quite high in sugar, which may help explain their attractiveness for the wandering sheep, and the wines produced from them are frequently in excess of 13% abv.  Luckily, the grapes are also blessed with naturally high acidity which helps to keep the alcohol in balance.  For those who are curious to learn more (and who can read Italian), somebody wrote a book about Pecorino called La Riscoperta del Pecorino: storia di un vitigno e di un Pecorino, which you can order here. 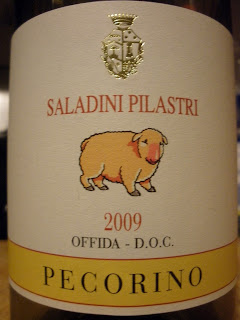 I was fortunate enough to find and try two different wines made from the Pecorino grape, both of them from the Offida DOC in the Marche.  The first wine I tried was the 2009 Saladini Pilastri Pecorino which I picked up from my friends at Bin Ends for about $13.  In the glass, the wine was a fairly light lemon gold color.  I tried this wine at the shop before I bought it and one of the salespeople there said to me "it tastes just like bananas!" which then promptly got into my head and wouldn't leave.  I gave myself a few months before I opened it at home, but that memory persisted and all I could smell or taste on this wine was bananas.  The nose smelled like bananas.  On the palate, the wine was on the fuller side of medium with fairly high acidity and tasted like bananas.  There was also some lemon, green apple and pineapple with a hard, steely kind of minerality to it, but the dominant flavor was still bananas.  Not even like fully ripe bananas either but like Laffy Taffy banana flavored candy, which I really don't enjoy.  I tried leaving my glass on the counter for a few hours but when I came back to it, it still smelled and tasted like bananas.  I read up on the grape to see if this was a common characteristic, and it certainly didn't seem to be, so I set about to track down another bottle for comparison's sake. 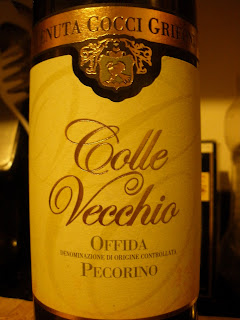 The second bottle that I was able to find was the 2009 Tenuta Cocci Grifoni "Colle Vecchio" Pecorino which I also picked up from my friends at Bin Ends for about $14.  This is the winery owned by Guido Cocci Grifoni who was responsible for discovering the Pecorino grape in the first place.  This wine is made from some of the original grafted vines and probably contains the oldest vine Pecorino juice available today.  If any winery could be said to make the benchmark Pecorino, surely this would be it.  The first bottle I bought was disappointingly corked, but Bin Ends replaced the bottle and the second was much better.  In the glass the wine was a pale silvery lemon color.  The nose was fairly reserved with some white pear and green apple.  On the palate the wine was medium bodied with fairly high acidity.  There were flavors of bright green apple, lemon peel and a lot of ripe, juicy pear.  The wine finished with a kind of chalky minerality.  It's not an assertively flavored wine, but it is well balanced and refreshing.  Fans of high acid whites should find a lot to like about Pecorino.
Posted by Unknown at 12:53 PM

Hello,
this is more of a question than a comment. I am looking for food matches for this pecorino grape variety. Any suggestions? thx

Just finished tasting an IGT Pecorino from Terre di Chieti - the winery is Azienda Tilli. No bananas, however... aromas of marzipan, pineapple and citrus and a silky smooth mouth feel with flavours of white grapefruit, lemon curd and a lovely bite on the racy finish. I believe white pizza (usually made with Asiago, Gruyère, Chèvre) would be a good match with the acidity cutting through the rich cheese. And while you're at it, why not add some Pecorino cheese? I have a good recipe for white pizza garnished with arugula I'll send if interested. Cheers, Vic vic@winecurrent.com