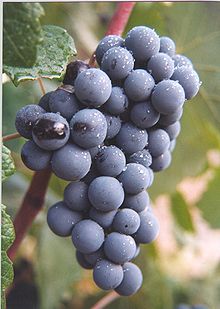 Pop quiz: what are the top three grapes in Spain by vineyard area planted?  No points if you guessed Tempranillo, which is actually second in this race.  One bonus point if you knew the little trivia bit about Airén being the most planted grape variety in the world by vineyard acreage (and thus the most planted grape in Spain).  You might guess that Garnacha Tinta, Carignan (Mazuelo) or Viura (Macabeo) may take the number three slot, but you'd be mistaken.  Bobal covers more than 90,000 ha of land in Spain, accounting for 8% of all plantings, and that means that it is the third most planted grape by acreage in Spain.  So why haven't we heard more about Bobal and why is it so difficult to find?  I've been wine shopping for this blog for a long time at a variety of stores and to date have found exactly one bottling of Bobal on the shelves.  What's going on here?

Well, one explanation is that vineyard area sizes are misleading when we're talking about Spain.  As mentioned in the post on Verdejo, it gets really hot in Spain and is very dry in a lot of places.  This is especially true of Utiel-Requena, just west of Valencia, where most of Spain's Bobal is grown (it accounts for somewhere between 75 - 90% of vineyard area there).  Drought is a problem here so vines are planted pretty far apart so they won't compete with one another for the little rain that they get.  The spacing also allows for air circulation between the vines which helps to keep them cool (these vineyards are also at a slight elevation, averaging about 720m above sea level, which helps, but not a lot).  But even if we take planting density into account, there's still 90,000 acres of this grape in Spain, which is an awful lot of land.  That's more than Garnacha, Carignan or Monastrell which can be found pretty easily in your local wines shops, and it's a lot more than Mencía or Godello, which aren't exactly widespread but can be found with a little diligent looking.  So why no Bobal?

The answer is similar to the answer you'd get if you really looked into why you don't see much Colombard from California.  In volume of grapes crushed, Colombard is #2 for white grapes in California, yet you almost never see a varietal Colombard.  The reason is bulk wine production.  Almost all of the Colombard in California is used in bulk and jug wine production, and for many years, most of the Bobal grown in Spain was meeting the same fate as it has never been considered a star variety (Bobal is not mentioned at all in the Far From Ordinary Spanish Wine guide written by Doug Frost and published by the Spanish Institute for Foreign Trade).  The red varieties recommended by the Consejo Regulador in Utiel-Requena are Garnacha and Tempranillo while Bobal is relegated to "permitted variety" status.  It does make a very good rosado (rosé) wine and is the only permitted grape in the rosado Superior bottlings though it is not permitted in the red Superior wines (Superior wines have a slightly higher alcohol content than the regular wines which is a sign of riper grapes and, theoretically, higher quality wine).

It is native to Utiel-Requena, where it has adapted quite well to the extreme climate of the region (which, I'm guessing, make the land not so great for other forms of agriculture as well).  Frosts are a major hazard here and they can persist well into April and May.  Bobal buds late, though, and so avoids most of the dangerous frosts.  It thrives in the heat, which is good because temperatures can soar to well over 100 degrees in the summer in Valencia.  Bobal is also a very vigorous vine which is a quality that all bulk wine growers look for, especially in a region with very low planting density, since they can get a lot more juice from a fewer number of vines.  There is a method used in the production of many of these bulk wines called doble pasta.  When Bobal is made into a rosado wine, it is left in contact with the skins for only about 12 hours or so.  The wine is then drained off the skins and taken to ferment in a different vessel.  The grape skins are left behind and a new batch of grape must is poured on top of it so that the new juice is essentially fermenting on two batches of skins.  This creates a powerful dark wine with very high alcohol which is used in bulk blending to add color and body to wines from elsewhere that may be overcropped or dilute. 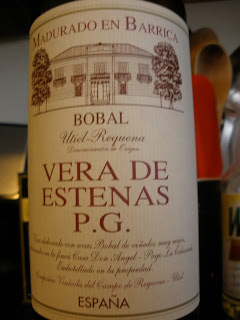 As in so many regions in the world today, there is a newfound commitment to quality on the part of many producers who are trying to elevate Utiel-Requena and Bobal to new heights.  Vera des Estenas is one of the oldest producers in this region and they are one of the producers leading the charge for a new Utiel-Requena.  They grow several different grapes on this property (including many of the international varieties), but they also have some choice 100+ year old Bobal vines that they make into a high-end bottling called Casa Don Angel which retails for around $30.  I was able to pick up a bottle of their 2009 P.G. Bobal (their entry level bottling) for around $11 at Bin Ends.  In the glass, the wine was a purple-ruby color with good, intense saturation.  The nose was all ripe purple fruits with blueberries, blackberries and something a little flowery.  The wine was pretty full-bodied with nice acidity and firm grippy tannins.  There was blueberry and blackcurrant fruit with some blackberry jam and a smoky charcoal element to it.  This was an interesting wine as it had a lot of really ripe, concentrated fruit, but structurally it was pretty rustic with chunky tannins and nice acidity.  It has definitely seen some oak, as the phrase "Madurado en Barrica" practically screams at you from the top of the label.  This is a food wine in every sense and would be a great wine to have with grilled meats or something with a good char on it.  This is really an excellent bottle of wine for $11 and is a pretty exciting find for me.  I will definitely seek out more wines made from this grape and this region because if they're even close to the quality here, they represent one of the great wine values in the world right now. 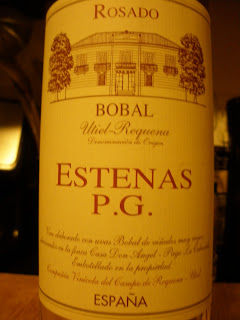 Recently I was able to find and try a rosado version of Bobal.  It was the 2010 Vera de Estenas PG Bobal, as in the red wine above, that I was able to find from my friends at Curtis Liquors for about $13.  In the glass, the wine was a light ruby color that was fairly deep for a rosé, and looked more like a pale red wine than a pink one.  The nose was very aromatic with strawberry, watermelon candy and flower aromas.  On the palate, the wine was on the lighter side of medium with fairly high acidity.  There were flavors of juicy watermelon and light strawberry with some red cherry flavors as well.  The wine was very fruity, juicy and fresh.  It was a little tart, but not enough to really be distracting.  This is exactly the kind of rosé that I look for in the summer as it was very refreshing and while it wasn't all that complex, it was pure and delicious.  If you're a fan of fruit-forward, juicy rosé wines that are popping with red fruit flavors, then you've probably just found your next summer companion, especially at only $13 per bottle.
Posted by Unknown at 2:56 PM

Or... why not actually visit Requena in Spain and try the wine ? there are dozens, perhaps a hundred differant bttles of Bobal wine to try.

Oh, and an average bottle costs 2 euro - so inexpensive that you get a bottle gratis when ordering a meal in a restaurant. Makes you wonder at the mark up to arrive at $13 in the USA